Having had some development ups and downs over the last year, ERS Game Studio fights its way back to the top of the genre with Flights of Fancy: Two Doves. This high-class, high-fantasy hidden object adventure offers beauty, magic, wonder, and best of all, surprises—all of which (despite one sizeable flaw) remind us why the name ERS is synonymous with adventure game excellence.

Two Doves won me over from the start by casting me as a countess: an unusual choice of heroine that veers from the usual princess/detective/reporter/psychic idea. The narrative ball gets rolling when the countess is away from home, attending an engagement party for the king. She gets back and finds that her castle’s been violated by persons unknown. It appears they’ve stolen a magical dove (a twin to one owned by the king) necessary to protect the kingdom, and have turned her vassals into shiny little figurines. With the help of her last remaining servant, she combs the castle for clues and what she uncovers is deeply unsettling.

Considering the doom hanging over the countess and the kingdom, Two Doves‘ astonishing beauty is something of a paradox. It’s clear thatERS let the art team go full throttle here and gave them free rein to add as much creativity, color, and detail as their hearts desired. Amazing attention is paid to the game’s interface (the animated inventory items and unique scroll journal for instance) and overused fantasy themes are freshened up by extraordinary inventiveness (two words -“Viking plant”). Playing Two Doves brings to mind the magic you felt as a kid reading fairy tales for the first time: the feeling that around every corner will be something new, strange, and possibly dangerous.

A big part of what makes fairy tales fun are the remarkable characters you meet within them. Two Doves embraces that idea by giving you two little helpers—a fairy and an elf—who can help you on your way. Both characters are nameable, and although the elf is basically an anthropomorphized Hint button, the fairy can perform many useful tasks, so long as she’s given enough magic dust. As you progress, you also repeatedly cross paths with a mysterious fellow who fills you in on the kingdom’s unique history. Finally, a range of otherworldly entities make for numerous other enchanting encounters.

Not surprisingly, the game’s puzzles and mini-games are as beautiful as the rest of it, and despite a fairly repetitive use of the same few puzzle types, are generally fun to play. In a new feature, something I’ve never seen before, individual puzzles provide not only Skip buttons, but buttons that allow you to choose between Casual and Hard difficulty. That’s a smart move on ERS’s part, since it could help more players engage with puzzles rather than jump past them.

The only thing Two Doves stumbles on, and unfortunately it’s significant, is its voice acting. Aside from the countess’s main servant and the narrator, the voice performances are truly dismal and provide all kinds of unintentional humor. For some reason, everyone in the kingdom has a different accent; the Elven princess sounds like a drunken Australian, the Elven nobleman’s wooden delivery makes him sound like a football player reading cue cards for the first time, and if you close your eyes, the king’s a dead-ringer for Russell Brand. 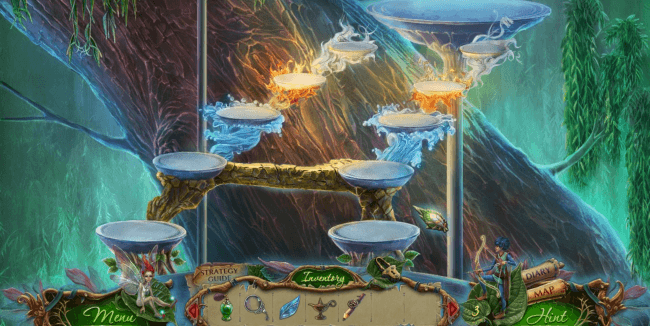 Yes, it’s that bad, but even with this misstep, Two Doves is a phenomenal game. Better yet, once the main game is over, an equally well-crafted bonus chapter extends the fun for another hour. This short epilogue wraps up a bit too quickly, but it’s more thoughtfully made than the majority of bonus chapters. Other extras include movies, music, wallpapers, screensavers, all the hidden object scenes and mini-games seen during the game, plus a gallery of truly beautiful, worthy-of-saving-to-your-PC concept art. There’s also a charming little Achievements gallery called the Fairy Room where you can dress your fairy in different outfits and watch her frolic as only fairies can.

Flights of Fancy: Two Doves is a darn-near perfect hidden object game. It’s radiant, arcane, and charmingly engrossing. As such, it’s hard to fathom ERS’s decision to release it with such horrendous, game-bruising vocal performances. Thankfully, the vocals are a small part of the experience and notwithstanding their unfortunate presence, Flights of Fancy: Two Doves is still compulsory hidden object adventure gaming.