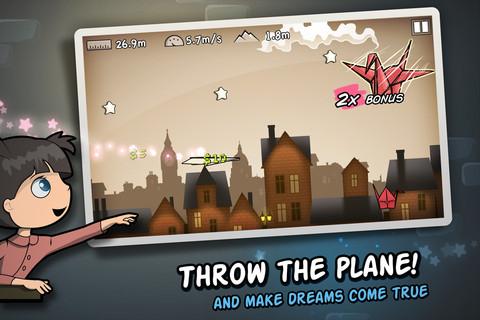 A nice flight, but a shaky takeoff

We take the miracle of flight for granted. It’s hard not to considering that at any given time, there are thousands of planes and tens of thousands of people in the air. They fly over with little more notice than a quick observation from spectators on the ground–if there’s any awareness of them at all. And yet it’s truly one of the most amazing things one can imagine. Flight! takes players back to the most basic form of gravity defying: the paper airplane. It’s a never-ending runner that takes you through the air, but does it get off the ground or nose dive after take off?

The gameplay of Flight! will be very familiar to experienced iOS gamers. It’s similar to the endless runner games, where there’s no real goal aside from getting as far as you possibly can. You start each level by picking up your plane and launching it into the air. Once off the ground, you have a little bit of control over the paper plane which will allow you to snag stars for cash, paper cranes as a multiplier, shooting stars for a boost and dice for a chance at a power up. After each flight, you head to the hangar to upgrade your frequent flyer with things like more control, higher likelihood for power ups, and better build models. Rinse, wash, repeat.

Every flight has a story behind it. In the case of the plane that stars in Flight! it’s an odd one. The game opens with a cutscene that shows the origins of the plane. A little girl named Sandy sees a neighbor girl receive a gift from her mother, prompting Sandy to wish she had a chance to experience the same thing. She writes out her fantasy on a piece of paper addressed to Santa, then sends it on its way with the fold of an airplane. This sets you off on the first level. Once you reach the end of it, you’re greeted with another cutscene that shows the next piece of fate for the plane. A gentleman finds it, and adds his wish for a girl to fall in love with him and sends it on its way. It keeps getting weirder from there, and completely misses the tone that was set in that initial story set up. It goes from sad and a little heartbreaking to silly and quirky and it just doesn’t work. 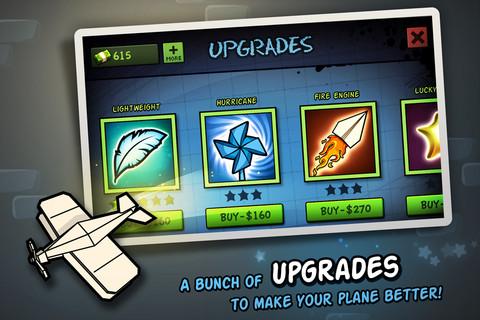 It takes a fair amount of time to build up enough steam to make flights actually last. You might be into the third environment before you’re consistently flying over 200 meters, and frankly those flights just aren’t very long. Often times in attempting to score power ups, the controls aren’t quite tight enough to deliver you to the goods. You can use a boost to catch up to the shooting stars and float die, but half the time it isn’t even worth it because the star gives you as much boost as you used to get it and the dice unleash a slot system of chance for power ups that is as likely to miss as it is to hit. You might honestly be best off just coasting by and scoring as many cash stars and cranes as you can to build up your cash reserves until you can build a plane worthy of long distance travels.

Flight! isn’t a bad game by any means. It functions as advertised and the game works perfectly. It’s just not that interesting. Flights don’t last too long, which is upsetting because all you want to do in this game is soar. Controls get better with upgrades, but it’s annoying to miss stars because you just don’t have the range to do what you want until later in the game. The game has the potential to be better with a little tweaking because once you get further into Flight!, it really captures the fun of being up in the air. Unfortunately, the further you get into the game, the further you get into the story too. And the tone just doesn’t feel right. Skip the cut scenes and get as far as you possibly can and this game starts to get interesting. The early stages though? You’ll want to soar over.