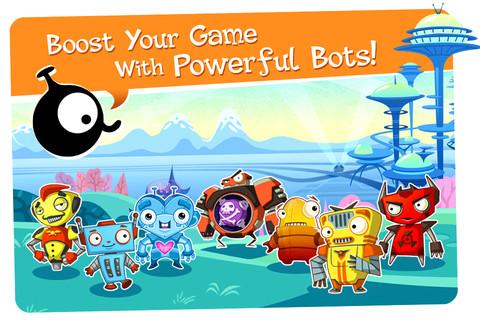 Flight Control Rocket improves on the classic formula, but at the cost of constant panhandling

The original Flight Control by Firemint is still a showcase title for the iOS. Whereas many studios struggle to import console games and implement traditional controls on a platform that was never designed for them, Flight Control is tailored to suit the touchscreen’s strengths. What’s more, the game demonstrates that small, independent developers are very capable of designing hit titles in this age of giant studios and flashy graphics.

Flight Control Rocket is still all about directing air traffic while incurring as few casualties as possible. Except now you’re in space, traffic is much heavier, and the spaceships that you’re in charge of subscribe to some crazy flight patterns. It’s no longer simply a matter of making sure the aircraft lands where it’s supposed to. The ships are color-coordinated and must land in similarly-colored ports. More than that, some ships fly in long formations, while others deposit drones that also need to be guided to safety before another ship uses them as a mid-air speed-bump. Every type of ship travels at different speeds, and motherships will occasionally lumber onto the scene to drop off a whole whack of smaller vehicles. In other words, you’re in charge of an intergalactic goat rodeo. Good luck.

There is one spot of good news: you have robot friends to help you out. Near the start of the game, you’re granted a freebie robot who randomly increases your score multiplier, which helps you rack up that sweet high score. Sadly, the robots also serve as just one example of EA’s pandering for microtransactions in a game that’s not free to begin with. Flight Control Rocket gets difficult quite quickly, and what a coincidence, there’s a robot to ease your struggles in every aspect of the game. There’s a robot that shortens snake ships. There’s a robot that automatically lands some ships. There’s a robot that makes it cheaper to continue (you’re allowed to screw up three times before the game ends, though you can continue for a considerably high amount of coins). Needless to say, these robots cost a heck of a lot of coins. You can technically save up what you collect in-game, but it’ll take you ages.

Of course, none of these purchases are necessary, but it still feels like EA is pressuring you. You even need coins to access the game’s Odyssey Mode, which is a level-by-level journey with specific goals and time limits. Locking away such a seemingly basic gameplay mode is a cheap move by EA, especially since (again!) Flight Control Rocket costs money to begin with.

Despite these criticisms, Flight Control Rocket still plays very well. It’s fun, and EA built a great game on a proven formula. The game simply doesn’t feel as earnest and honest as the original Flight Control, but hey. That’s progress for ya.