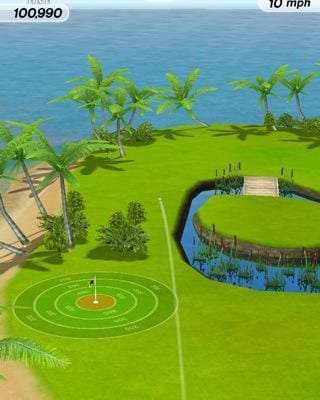 Flick Golf plays like a hybrid of shuffle board and golf… or maybe crokinole and golf. Curling and golf? Bocce ball? Whatever your target-based cup of tea is, Flick Golf blends it with the classic Scottish game of sticks and balls.

The object of Flick Golf is fairly simple. Like golf, there’s a hole that the players are aiming for. Like shuffleboard/crokinole/curling/etc, scoring takes place based on your distance from the hole. The closer you are to the hole, the more points you’ll be awarded.

Since you only get one shot at each hole, the game isn’t about sinking a putt in as few shots as possible like in traditional golf, but simply about getting as close to the target as you can. On paper this might sound a little dull, but the developers at Full Fat Productions have added in some great twists to make Flick Golf challenging, fresh, fun, and insanely addictive. 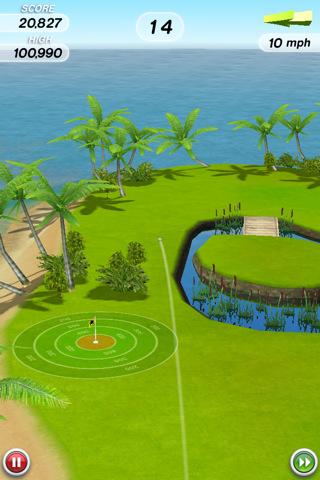 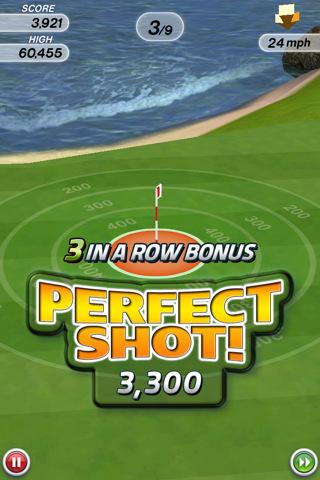 Ball control plays an incredibly important factor. In most golf games you’d merely line up your shot, swing, and wait to see where it lands. In Flick Golf you’ll exude as much control over the ball after it’s in the air as you did while it was on the tee. After lining up your shot and flicking the ball to send it on its way, you’ll be able to change the direction of the ball in midflight by swiping your finger in the direction you want the ball to go. This lets you put all the top spin/back spin/curve on the ball that you want in an effort to guide it to the hole. As we quickly realized after our first shot, this is a game that has players swiping up a frenzy. Factor in ever-changing wind direction and speed, and you’ve got a recipe for a game that offers up a unique challenge no matter how many times you approach the same hole.

Scoring is half the fun in Flick Golf, and there’s more to earning points than how close you get. You’ll earn bonus points on each shot for how much top spin, back spin, and curve you put on the ball. It’s a neat system that rewards golfers who don’t always play it safe. After all – you could easily get 500 points for rolling up next to the pin, but wouldn’t you rather get 1000 by zooming past the pin, changing direction, and rolling your way back to the same location? You’ll also get extra points for things like getting a hole-in-one or a perfect shot. 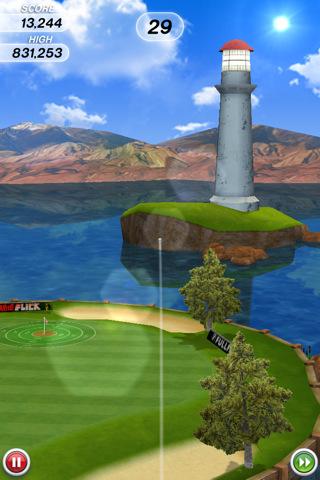 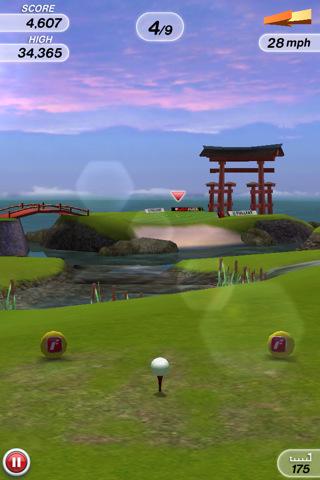 That brings us to our only real gripe with Flick Golf – it can be tremendously hard to unlock those gold trophies. Each course is comprised of 9 holes, and to score enough points to unlock the elite course you’ll pretty much need to score a hole-in-one on all 9, plus do it with a fancy point-earning backspin/curve/top spin combo. Unlocking the elite course is a gruelling achievement that, admittedly, this reviewer has yet to accomplish.

Then again, this gruelling difficulty does give you a great reason to keep replaying the other courses. And since there are only four of them, you can see why the developer would have wanted to build in a reason for replay. While it’s not a game that needs a huge variety of courses, it’s also not a game that offers one.

Still, the courses it does have all play well and look great. The presentation in Flick Golf is more than adequate, offering up colourful environments and some terrific sound design that captures all of the nature sounds you might hear on a real golf course.

Full Fat Productions have made something special with Flick Golf, offering up a perfect pick-up-and-play experience that’s easy to learn, difficult to master, wonderfully unique, and impossible to put down. What’s more, the developers have an update in the works that addresses the few complaints we have, and promises easier level unlocks, new levels, Game Center support, and more. If you’re looking for your next iOS addiction and love flick-based gaming, make Flick Golf your next purchase.

Shop it Up! Review