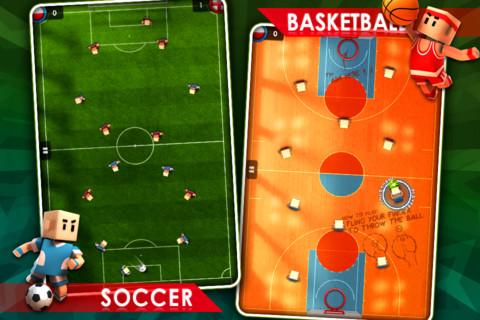 Flick Champions is a mini-game collection generally based around that basic gameplay element of “flicking,” and applying it to a variety of sports. Some of the applications work better than others, running the full gamut from really fun to not fun at all. I’d actually go so far to say that more than half of the games are just so-so at best. So why do I think Flick Champions is still worth owning?

The short answer? Soccer and Ice Hockey… and to a much lesser extent, Archery. But let’s not get ahead of ourselves. First let’s talk a little bit about how the game works.

The easiest and best analogy I could give you to describe the game would be to say it’s a lot like Wii Sports, just with touch screen controls replacing the Wii-mote “waggle” controls. The games are very boiled down versions of the sports they’re named after, reducing your requirement for playing them to various flicks and strokes.

Soccer is the first one on the list, and easily my favorite game in the pack. In it, you’re not required to move your players around the field at all. They all stay stationary, with the exception of the goalie who just moves back and forth. You’ll flick to pass the ball back and forth and attempt to score. If the ball is off target, it sort of rolls to which ever player is closest, sort of like a bubblechex hockey game or foosball table. After a goal all of the players move slightly, so the angles to score are different each time. It works very well, and is a lot of fun to play.

Tennis and Ice Hockey I’m grouping together because they’re essentially played exactly the same. You’ll tap and hold on your player (be it hockey or tennis) and drag to move them around the field, trying to simply bump into the ball (or puck) to bounce it back the other way. They play like air hockey. They’re fun, though you don’t need them both. It really feels more like a re-skin of the graphics to move it from the ice to the court with some very slight changes.

I’d like to not spend too much time discussing Basketball because, well, it’s just not very good. It plays out like you can probably expect by now, flicking and dragging your finger, etc. The issue with it (and archery & bowling to a certain extent) is that it’s impossible to really determine distance vs. strength needed in the flick. It’s one thing to just fire your shot at the goalie and hope it goes in, but hitting the bucket in basketball requires more precision that the game simply doesn’t allow for. There’s just no way to determine how much power, so it’s always a guessing game. 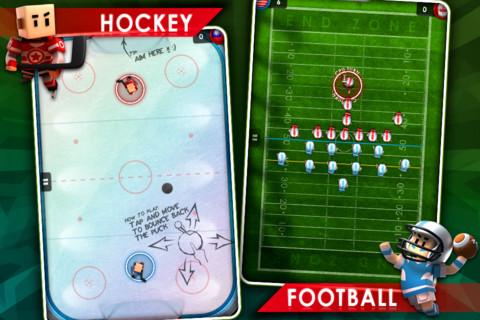 Bowling, Minigolf and Archery are identical in the same way Tennis and Ice Hockey are mirror images of each other. The only difference is that these aren’t nearly as much fun. Maybe it’s because there’s nothing to do really except flick to fire a shot then try again. They just don’t offer enough interaction to make them interesting for more than a game… maybe two.

Last up is Football, and it plays like one of those old electronic football games that you plugged in and it vibrates to knock all the players together. You pick a formation then the players just kind of bump together (like real football when you think about it). If a receiver ends up open you can throw to him by, you guess it, flicking. It’s really kind of boring.

Each sport has exhibition and cup game modes, and each earns you experience that you can use to unlock different in-game upgrades like higher difficulties and different balls. You can also pay a buck to unlock everything there is in the game if you want to.

While more games than not in Flick Champions are kind of a bummer, I found enough enjoyment in the Soccer and Ice Hockey/Tennis games to make me keep coming back for more. They’re unique enough to offer a challenge, but easy enough that they remain very much “pick up and play.” Overall it runs very hot and cold, but the strength of those two games salvage an otherwise lackluster experience with Flick Champions.