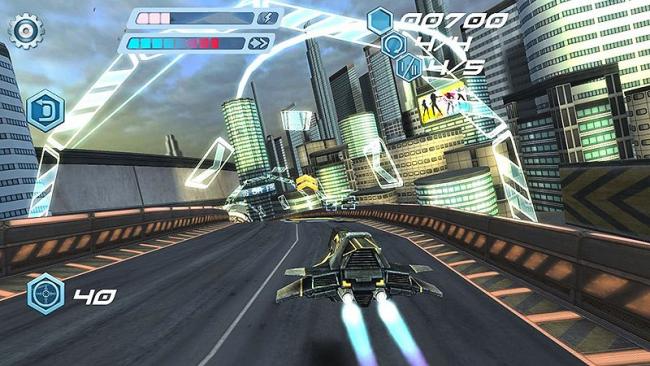 All that hovers is not Wipeout.

Let’s take a moment to relive that golden day in 1995 when Wipeout was released for the PlayStation.  The air smells so good here, doesn’t it?  We’ve got a brand new console with a gorgeous F-Zero-style racer, but everything’s been kicked up a notch: speed, graphics, maneuverability.  And now there are weapons!  Mines and missiles and electro-bolts, oh my.  I’m never leaving my house again.

Snap back to reality: it’s actually 2012 and I’m playing Flashout 3D.  Luckily, I still have Wipeout on PSN—and won’t be deleting it anytime soon.

On its surface, Flashout 3D appears to be the perfect iOS option for Wipeout fans.  Races take place in colorful, futuristic versions of present-day cities filled with on-track boosts, jumps, and shortcuts.  You’ll need to utilize not only speed and agility to win, but also weapons that are used to destroy (and temporarily disable) opponents’ vehicles.  You’ll also pick up bonuses like shields, nitro boosts, and auto-pilot options to give you an edge over the other four racers, as well as in-game currency to buy new ships and upgrades.

Sounds familiar, right?  Flashout 3D does an excellent job of channeling its spiritual inspiration, resulting in a consistently fast-paced and unpredictable racing experience.  Each of its seven tracks are significantly long and packed with a variety of sharp turns, tight tunnels, wide-open jumps, and optional paths.  Bonuses, currency, and boosts appear extremely frequently, giving you a constant focus and goal even if you’re alone in the lead (or lagging behind).  And with the game’s beautifully clear in-race interface, it’s very simple to tell exactly where you’re ranked, how much health you have, and what weapons are available.

Unfortunately, that’s where the similarities—and good points—end.  Despite a strong foundation, Flashout 3D is riddled with cracks just below its Wipeout surface.

There are two control options available—the accelerometer, or a floating joystick.  The joystick option is unresponsive even on the highest sensitivity—and overly reactive when it does read your touch—making it essentially unusable.  The accelerometer, while viable, must also be turned up to the highest sensitivity before you begin to see a reasonable turn rate.  And since each unlockable ship has a different maneuverability score, you’ll have to relearn how to use the accelerometer with each new craft.

You can get used to the controls, but there will still be the four opponent vehicles to contend with once you do.  The AI in Flashout 3D is infuriatingly strong, with little variation between the different difficulty levels.  If you are within sight of any other ships, they will pick up every bonus on the track, (even the money—what do they need that for?), leaving you nothing.  They also seem to band together in a vendetta against the player: I’ve driven directly behind two cars that seemed oblivious to each other, only to pass them and have each shoot at (only) me immediately. 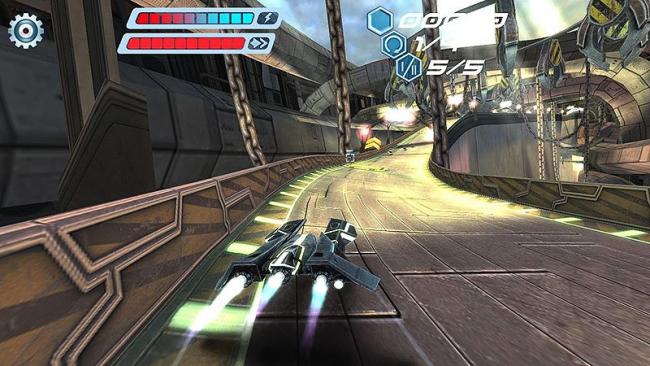 Don’t worry, though—only the last lap really matters in any race.  You can lag in last place for the first four laps, or cruise ahead of everyone, and still easily win or lose in the final lap.  I’ve spent entire races so “far ahead” that I never even saw anyone else, only to have three cars zoom past me at the last minute—while I was going full speed—and beat me to the finish.  And the reverse is also true.  This ultimately leaves very little strategy to the race outside of “save everything you have for the last lap.”  In which case, why bother having more than one lap at all?

The items you should be saving for that last lap, though, are only the nitro boost and machine gun.  The rockets—claimed by the game itself to be “very powerful”—and auto-pilot are broken to the point of being detrimental.  Rockets will miss their target even when shot point-blank from directly behind.  This is sadly less defective than the auto-pilot, which merely steers you down the middle of the track and won’t even attempt to pick up bonuses, hit boosts, or avoid getting shot by enemies.  My last use of the auto-pilot actually allowed an easily-avoidable rocket to hit my ship and then steered me into a stationary bomb.

On the one hand, I want to give Flashout 3D some benefit of the doubt: it feels like an incomplete game right now, and perhaps a forthcoming update with vastly improve it.  Both “Challenge” and “Multiplayer” modes are listed as “Coming soon” in the game menu, indicating just such an enhancement.  However, other details make me wonder why it was even released at this point.  Your default leaderboard name—which shows up every time you finish a race—is “Player,” and the game never provides an option to change this.  Play areas that are locked, like certain career circuits, tracks, or ships, have no explanation of how to unlock them.  Even the purchasable upgrades in the garage have no explanation: I found out the hard way that buying both the rocket upgrade and machine gun upgrade is pointless, as you can only have one weapon at a time—and rockets cancel out the machine gun.  Luckily I didn’t need that wasted cash to buy extra auto-pilot boosts; you can keep those. 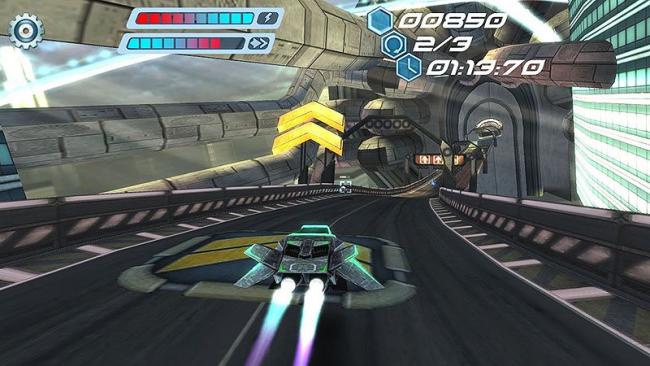 For the desperate Wipeout fan who needs a futuristic racing fix, Flashout 3D is not unplayable.  As a $2 game with more disappointments than features, it is one to wait on.  The chance to play multiplayer against human opponents instead of the infuriating AI is enticing.  And if “Challenge” mode will be anything like Speed Forge‘s battle arena, I’m definitely excited.  Until these updates are available, though, Flashout 3D should stay on the backburner.

Northmark: Hour of the Wolf Review