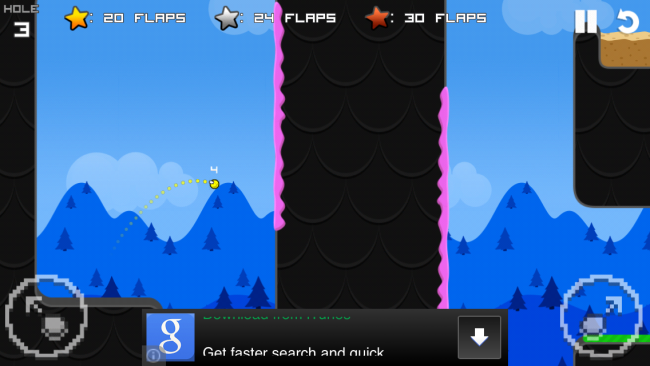 Cats have nine lives, but birds live forever. At least, that’s the impression you might get from the tsunami of Flappy Bird clones that washed onto the App Store and Google Play once Dong Nguyen’s original flapper took its leave.

Most Flappy Bird clones attempt to carry on what Nguyen began, which is why we have dozens – maybe hundreds – of games about getting a bird (or a fish, or a dragon, or a tiny butt) to fly through various objects. There have been more than enough Flappy Bird facsimiles to fill the void left by the original, but Noodlecake Studios gets a gold star for actually evolving the original Flappy Bird with Flappy Golf.

Flappy Golf allows you to fly in two directions: Up and to the left, or up and to the right. In order to earn stars, you need to plop your ball (yourself) into the cup within a certain number of flaps. The less flaps you use, the better.

Flappy Bird physics are in play with Flappy Golf, which means the “ball” carries a lot of weight and can be difficult to maneuver. If you want to earn a gold star on each course, you need to learn how to use the terrain to your advantage. Gravity is your friend as well as your enemy, and it’s up to you to learn how to harness it for your benefit.

If you’ve already played Super Stickman Golf 2, all the courses in Flappy Golf should look familiar to you – they’re more or less exactly the same. That said, taking direct control of the ball as opposed to indirectly controlling its course changes up the gameplay enough that Flappy Golf feels like a new experience. Maybe you’ve already mastered putting around the portal laboratory or the acid mines. Now learn how to negotiate those dangerous corridors with a ball that flies like a robin with a bowling ball stuffed up its cloaca. 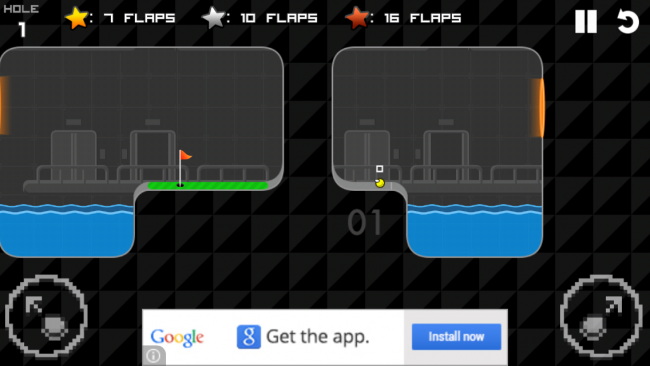 If Flappy Golf‘s single-player experience still winds up being too tame for you, you might find the multiplayer feature more entertaining. You and up to three opponents (online or local) choose a level pack, then race to sink yourselves in the cups. The player that comes in first gets two points, the player that comes in second gets one, and third place gets none. Each player’s moves are displayed on-screen in real time, making for an exciting (and often funny) race.

Folks are generally divided about Flappy Bird‘s merit. Some say the game is deserving of its fame, others say its popularity marks the end of the games industry as we know it. There’s no argument about Flappy Golf‘s excellence, though. If more studios find ways to truly make the Flappy Bird phenomenon their own, all the hubbub surrounding that yellow one-eyed bird will have been worth it.