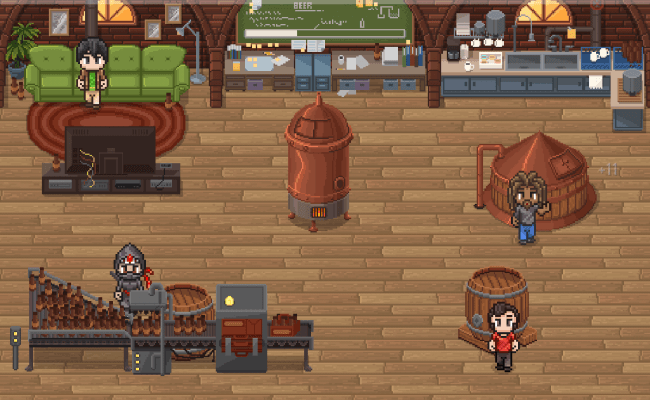 Stop drinking that – we have to sell those!

There’s something romantic about the idea that someone could start out brewing beer in his or her own basement and wind up taking the world of adult beverages by storm. If you don’t think trying to live out that fantasy sounds like good fodder for a mobile sim/RPG, Bit By Bit Studios begs to differ. Fiz: The Brewery Management Game has risen from Kickstarter like suds to the top of a mug, giving you a shot at building your very own brewery from the ground up.

Like Drake might say, you’ve got to start from the bottom of the beer world before you can get on. When a new game of Fiz begins, all you’ve got is your own character, three buddies, some rudimentary brewing equipment, a few recipes, and some big dreams. You also own a couch (good for sitting on) and what appears to be an eight-bit NES, which is appropriate since the game is rendered in retro pixel graphics. 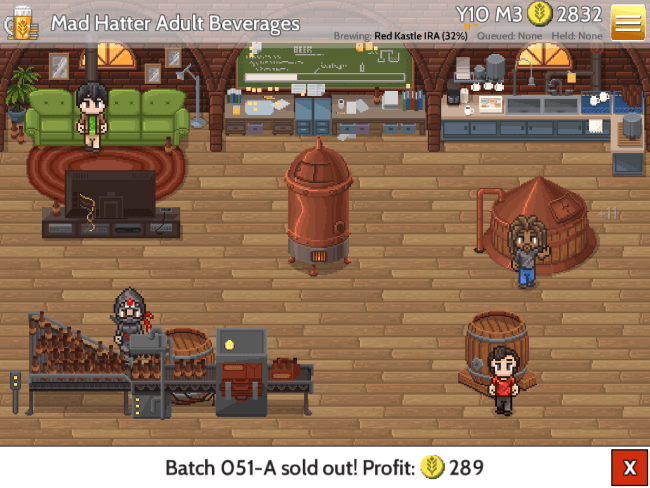 The semi-mystical figure Cyrus Uprum drops by in short order to introduce you to the wonders of beer-making. A menu in the upper-left corner is where the magic starts, allowing you to access the recipes you know and additional ones you can buy or learn. The actual brewing process begins by buying the proper ingredients to fill a given recipe and assigning your team members to one of four tasks: cleaning, mashing and boiling, fermenting and packaging.

Every character has four attributes that make them better suited for different tasks, and the quality of the beer will benefit if you match them up according to their strengths. After doing so, you spend Craft Points that can increase the yield (meaning more bottles), speed or quality of that particular recipe. Then you simply hit the Brew button and watch as your team leaves the couch and gets to work, complete with short bits of dialogue like my daughter’s potentially unfortunate new favorite, “Dance little yeasties!” (And before anyone gets on my case for being a horrible dad, please note that no beer is actually consumed on-screen in Fiz.)

Time passes as the brewing is done, and each year passes in a strict 12-month, four-weeks-a-month fashion. I know that’s only 48 weeks, but perhaps the time dilation properties of alcohol are to blame. When a batch is done, you can send it to market and sell it, hopefully for a profit, or place it in storage for later. 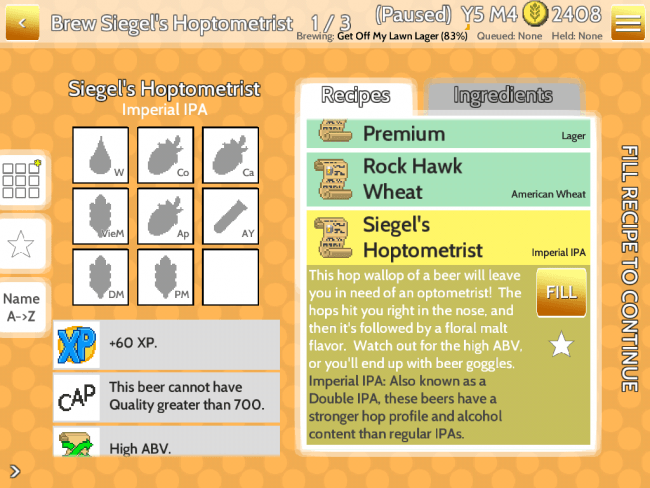 Simple, right? In fact it’s so easy and repetitive that Fiz would get boring fast if that’s all there was to it. But Bit By Bit really built a complete RPG around brewing that gives you a surprisingly diverse range of things to do. For starters, there are tons of different beer recipes to learn, running the gamut of beer styles from lagers to ales to more exotic varieties, Each has specific recipe requirements, and you can tinker with the ingredient grid to try discovering some on your own. Upgrading your equipment is a big help too thanks to the bonuses new gear can provide.

The business side to the beer game is also important. As you progress, different channels will open up in which to sell your beverages. Matching the right beer to the tastes of each market is important, as is pricing it correctly. Trial and error can help, as can spending some coin on market research and going through your batch history to see what worked before. Some marketplaces are only open seasonally, so timing can be a factor.

Come to think of it, you’re nearly always under time pressure of some sort thanks to the quests and events the game serves up. There are contests to enter, and a number of colorful NPCs will approach you asking for specific beer orders to fill – and you want to appease them, as there are some great rewards to be won – while they drive the overall story forward. Some events happen just once, so you’ll learn to pause the game and plot out your actions before you commit. Yes, the same skill set that keeps you alive in Baldurs Gate or other fantasy RPGs can make you a better brewer. Who knew? 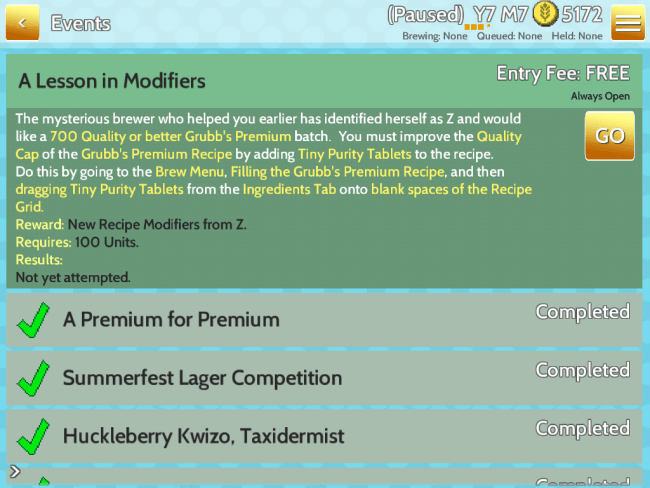 You’ll also be able to level up team members or fire them and pick up more skilled help as you progress. Clearly Bit By Bit had some fun with the tongue-in-cheek character design, as I don’t believe there are any ninjas or pirates working on beer in real life. I could be wrong though, as I’m more of a hard liquor man myself. If only they would have done some more with the music, as you’ll be sick of it long before your beer-making adventure grows old.

That’s assuming it ever does. Fiz takes an unusual setting for a sim or RPG, mixes in some wit and whimsy and blends it into something that will make you feel like you can actually take on the King of Beers with your own homebrew. And if that’s not living the dream for some of you out there, I don’t know what is.