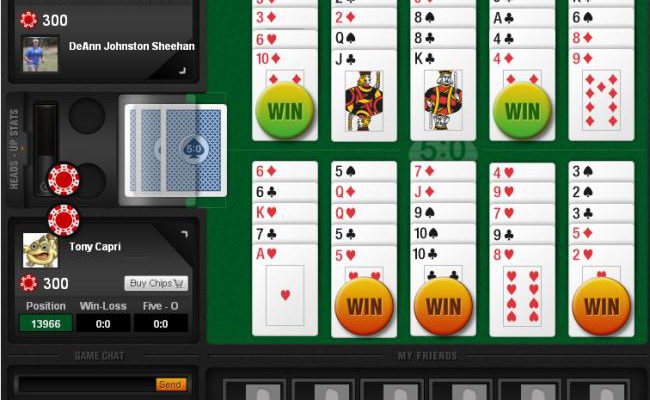 Feeling lucky? Then pull up a virtual seat at Facebook’s latest card table by Chiki Gaming. Five-O Poker doesn’t blaze any new trails in the online poker scene, but it does offer a fun formula that cuts through the glut of Texas hold’em games on the platform.

Five-O Poker is an interesting hybrid that mixes elements of five card draw, five card stud, and solitaire to create a simple yet strategic game that’s mildly addictive. Unlike most other games of poker, you’ll only make a single bet for the entire match, going head-to-head with one other Facebook player at a time. 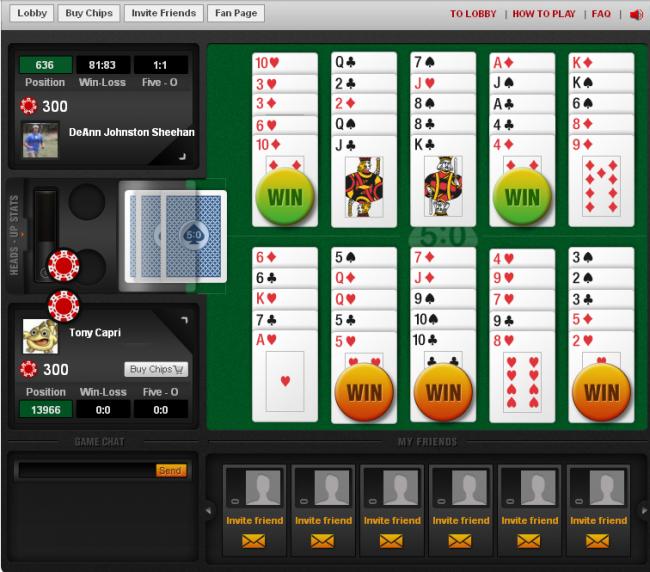 Upon first sitting down at a table, Five-O Poker can be a tad intimidating. However, the developers have done a great job walking players through the basics, and there’s a FAQ available as well, to cover any additional questions you might have. A hand or two, however, is about all you’ll need to get the hang of things.

Each player oversees five separate hands, with five cards being dealt to each hand. The player to go first is chosen randomly, with the dealer taking turns dealing cards to each player. Your job is to build the best poker hands possible. Typical poker rules apply – full house, flush, two pair, etc. The first four cards for each hand are dealt face up, allowing both you and your opponent to view each other’s hands; however, the fifth and final card for each hand is dealt face down.

Players are always able to see the next two cards at the top of the deck, adding another layer of strategy to the game. The game is fast-paced, and as simple as it is, it’s a whole lot of fun. A chat feature is built into the virtual table, and you can easily view stats and the play history of any opponent you’re up against. Unfortunately, if you don’t play a card before the turn timer ticks down, you forfeit the game, rather than simply having the dealer auto-play the card for you. 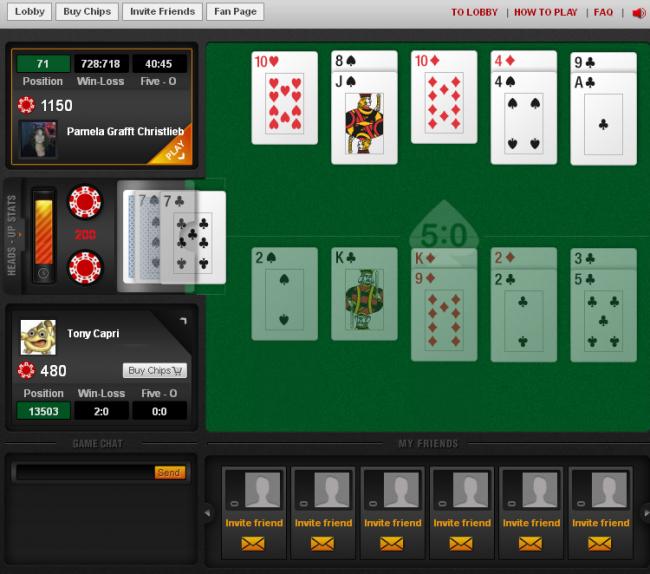 Visually, there’s not much to look at here. The game exhibits a very non-flashy presentation, but in terms of stats, social features, and convenience at your finger tips, Five-O Poker has all its chips falling into the right place. There’s no music and only sparse sound effects, but the game doesn’t suffer at all from its modest approach.

Five-O Poker is something of a bare bones experience, offering just the one mode of play. However, hopping into a game is painless, and the betting options are smartly designed. You’re given a gift of chips each day, and of course there’s always the option of purchasing more using Facebook credits. This isn’t the most exciting game of poker when it comes to bells and whistles, but the gameplay is good fun, both in short bursts and longer sessions.