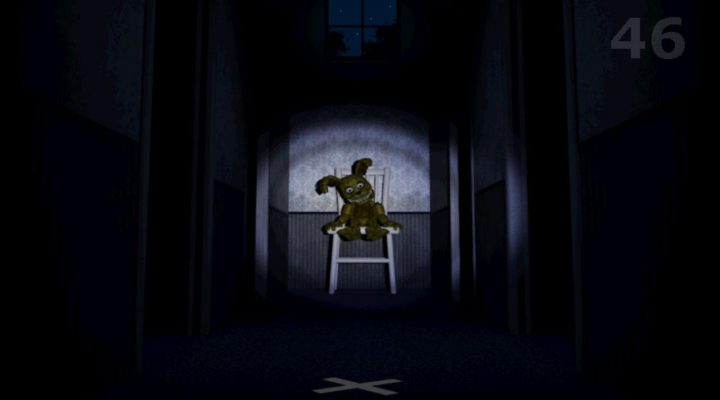 Those jump scares will still getchya.

Relying on audio cues to survive can be difficult in certain environments.

Android version of the game does away with the story-centric minigames.

One consistent bit of criticism that Scott Cawthon’s Five Nights at Freddy’s horror franchise has received over its short but furious lifespan is “the games are all the same!”

But that’s not quite true. Each of the games – there are four now, all released within the past year – have gameplay tweaks between them that are almost undetectable at first glance, but pretty significant. Five Nights at Freddy’s 2 moves much more quickly than its predecessor, whereas Five Nights at Freddy’s 3 pits you against a single but viciously clever animatronic.

Five Nights at Freddy’s 4 makes another tweak: Your survival relies on heeding audio cues as opposed to predicting the animatronics’ behavior via a camera feed. It’s a heart-stopping mechanic to be sure (Lord knows the game is full of things that go bump in the night), but you might run into problems unless you’re playing in an environment devoid of background noise. 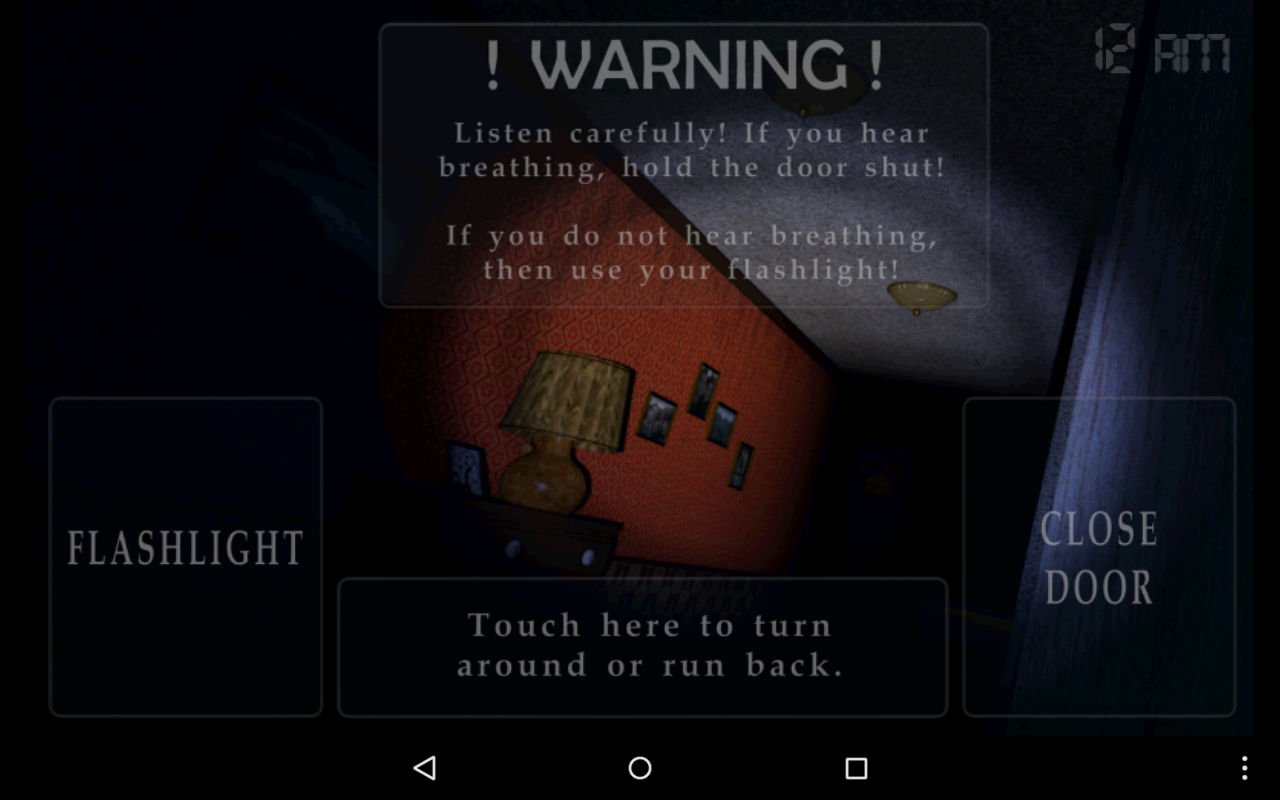 Unlike past games, there are no security cameras to monitor in Five Nights at Freddy’s 4. Instead, you play as a scared child who must run between his doors, closet, and bed constantly to keep monstrous versions of the animatronics at bay (seriously – Bonnie, Chica, Foxy, and Freddy are particularly terrifying this time around).

Shining your flashlight down the hall scares off any unwanted visitors, but only if they’re not already beside your door, waiting for a midnight snack of child-flesh.

The idea is to listen before you shine. If you hear breathing, you’re supposed to shut the door instead of turning on your light. That tiny but necessary pause adds a great deal of tension to FNAF 4. The darkness, the low point-of-view, and the lack of a security feed make you feel as blind and helpless as a newborn kitten.

The idea is tops, but a bit problematic in its execution. I sometimes found it difficult to hear my foes sneak up on me, regardless of how high my volume was turned up (which was fantastic when the inevitable jump scares started pouring in!). I don’t have an epic headset, but neither are my headphones from the-dollar-rack at Wal-Mart.

It helps to eliminate background noise, but that’s not always an option. I live in a small apartment with a husband and three cats. I have fans going because it’s high summer in southern Ontario and the weather is hotter and stickier than the tip of Baphomet’s butt crack.

There’s no way I’m turning my fans off. Not even for you, Scott Cawthon.

Besides – fans are the FNAF series’ patron objects. Turning off my own to play FNAF 4 feels sacrilegious somehow. 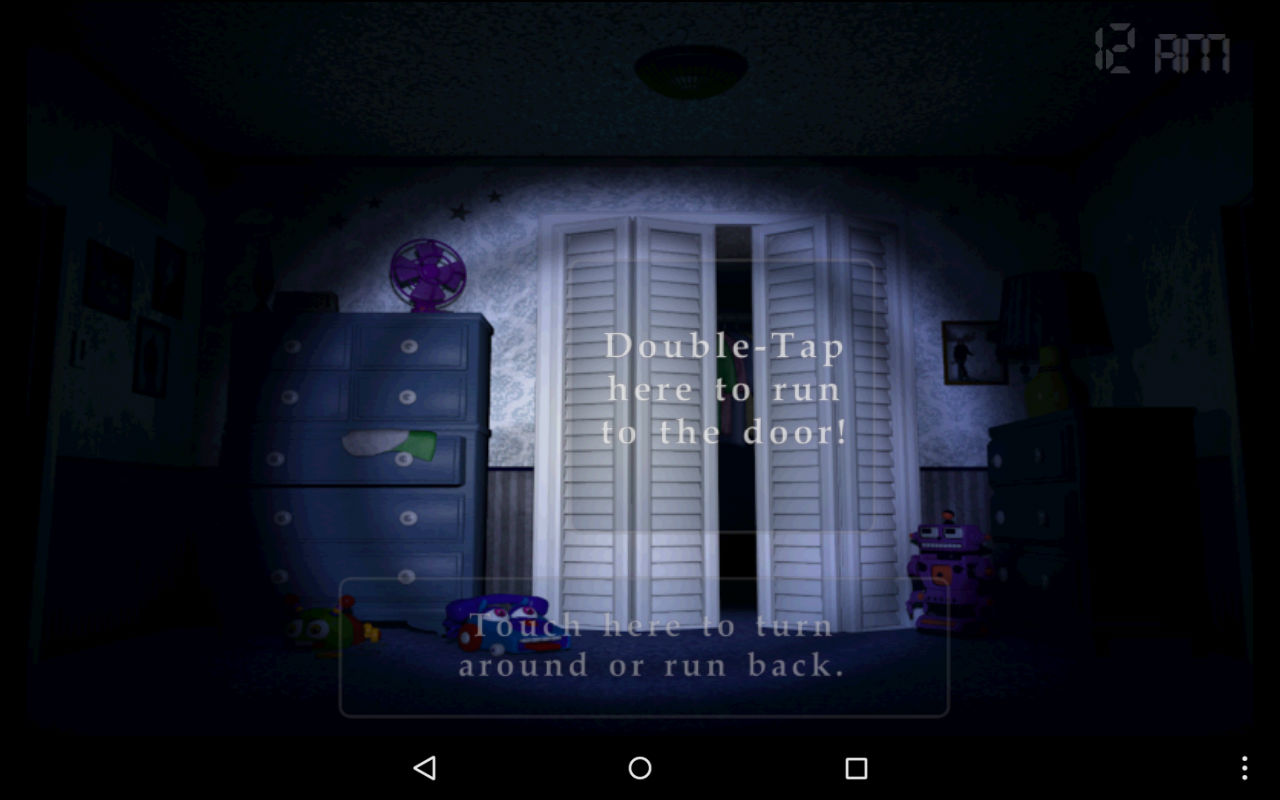 If you can find a relatively quiet spot in which to play FNAF 4, you’ll find the game is otherwise well put-together. The atmosphere is absolutely haunting, and all manner of faded screams and bells float through the air in those magical hours between 12 a.m. and 6 a.m.. The game’s story, which outlines the infamous Bite of ’87 (an event mentioned as far back as the first game, when an animatronic got a little chomp-happy), follows a young boy who’s constantly tormented by his older brother’s attempts to exploit his crippling fear of animatronics. That said, the mobile version of the game (at least the Android version, which I played) bafflingly cuts out these story interludes, which are present in the PC version. The butchery doesn’t affect the gameplay in any significant way, but it’s disappointing nevertheless.

This is just the start of FNAF 4’s story, as DLC is coming for the game on October 31. See you then, children. In the meantime, don’t stick your finger in Freddy’s mouth.