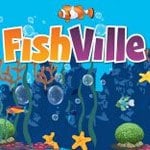 Sure FarmVille is great and all, but farming on Facebook is so 2 months ago. If you want to keep up with the Joneses you'll need to strap on your scuba-gear and gather up all the prettiest fish in the sea. Fish tank simulators are all the rage on Facebook right now. It was only a matter of time until Zynga, the biggest name in Facebook gaming, decided to cast their line in the water. But is FishVille a champion bass, or just a little lost guppy in a sea of aquarium games?

Like all of Zynga's 'ville properties, FishVille offers up some straightforward gameplay with an addictive set of unlockable rewards. While the gameplay itself is different enough from FarmVille to make it stand out on its own, the overall structure shares a lot in common with its farming sim sibling. You'll grow and sell fish, each of which requires a different period of time to grow. If you don't attend to your fish (in this case that just means feeding them) they'll die. Growing and selling fish earns you experience points that will help you level up, which in turn will unlock more types of fish and more decorations for your tank. All of this is identical in structure to FarmVille. You can even visit your neighbours tanks to clean them and send your friends gifts. Veterans of Zynga's last smash hit are going to feel right at home here in FishVille.

Despite the similarities to its farming cousin, FishVille stands out on its own as a unique experience. Fish aren't crops, and that shines through in the tweaks and changes from the 'ville formula.

One of the nicest things about FishVille is the speed at which you can play the game. There were never any 15 minute crops in FarmVille, but there sure are 15 minute fish in FishVille. In fact, the cheapest fish in the game will grow in 5 minutes. These “fast fish” mean you can turn the 'ville formula from a visit-once-a-day experience to an all-day affair. Sure you can pick the fish that take a day or two to grow and space out your time just like you would in FarmVille, those of us looking to kill an afternoon will be able to while away the hours tending to our fish.

The animations in FishVille are smooth, fun, and full of life. Fish swim in every direction with their little tails flapping and eyes blinking. Air bubbles float to the surface creating a sense of busyness throughout the tank. The music, like that in FarmVille, seems to be infinitely hummable and a perfect match for the gameplay. The only thing that seemed to stand out like a sore thumb in the presentation was the stoic decorations. Plants don't move in the water. Treasure chests don't open with little bursts of air. Decorating the tank is a big part of the fun in FishVille, but it could be even more exciting if the decorations offered the same level of detail as the rest of the experience.

In an effort to get an aquarium game on the market quickly, FishVille seems to be lacking some of the staple items that made Zynga's FarmVille property so successful. Clicking on Awards will show you a small “coming soon” sign. The same goes for tank backgrounds. It's a shame that little touches of the game like this make the product feel rushed out the door, because everything else in FishVille shows off such a high level of polish. (That said, if FishVille's update schedule is similar to FarmVille's we can expect the developer to start rolling out new features on a regular basis.)

Still, that's not to say the decorations in the store aren't plentiful. Traditional tank items like the stone arch and the treasure chest are there, as are fun and silly items like a toxic waste drum and a yellow submarine. A variety of plants are also available for purchase in the store. Like in Farmville, the items, plants and fish you can by is only limited by your current funds and current level. The higher your level, the more items will become unlocked.

The majority of these items can be purchased with the in-game cash you'll earn from raising and selling fish, but every now and then you'll come across an item that requires “dollars” rather than “coins.” Dollars (as well as additional coins for those who don't want to wait to farm fish) can be purchased directly through the game store with a credit card or PayPal account. Sand dollars start at 25 for $5.00 USD, which can go pretty quickly when you see that an extra tank will set you back 20, and most dollar-required decorations will set you back 5.

In the past, Zynga games have been notorious for including third-party offers that could help you earn these dollars for free. Thankfully, FishVille appears to be free of any of these scams so far.

In creating a game that's similar in structure to FarmVille, Zynga has found a way to navigate new waters without alienating any of its fans that haven't quite gotten their sea legs. FishVille offers up a a perfect blend of familiarity and freshness that any fish lover can enjoy. Whether you're a fan of Zynga games like FarmVille or competitors like Happy Aquarium, you'll be pleased to know that FishVille is easily one of Facebook's greatest underwater adventures.