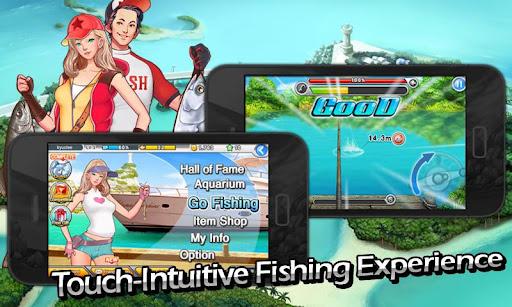 Hook, line, and sinfully good for a fishing game. That is the saying, right?

I’m not a big fan of fishing. It’s messy, it’s dull and it’s a lot of work. That’s where Fishing Superstars comes in: It’s a surprisingly complex and exciting fishing simulator, and if’s not quite like being there, that’s probably a good thing.

Fishing Superstars leaps out at you right from the start like the giant swordfish plastered across its opening screen, with the title spelled out in bold, bright letters and loud, boisterous music that makes you want to dance first and fish later. Touch the screen and you’ll be dropped into the game proper, where you’ll select either a male or female character, each with slightly different starting stats.. and then it’s time to hit it!

Your “career” begins at Wapo River, a tranquil body of water with a diverse range of aquatic life. Here, you’ll learn the basics of the game, from casting them out to reeling them in, without having to worry much about losing bait (and time) to strong currents and stubborn fish who really don’t want to end up in your collection. You can experiment with bait and lures, get comfortable with the mechanics of the game, add a few fish to your own personal aquarium and poke around at this and that to figure out how it all works.

The level of detail, at least to the eye of a non-fisherman, is impressive. More than a dozen different types of bait can be purchased, ten different types of fishing poles are up for grabs and you can outfit your avatar with a wide range of personal equipment, from a basic sun visor to high-end shoes, gloves and more. And their effect isn’t purely cosmetic; each one adds to your character’s strength, coordination, agility and/or luck, which impacts your performance in the game. These skills can also be trained, allowing the truly dedicated Bob Izumi wannabes out there to mold themselves into seriously extreme anglers.

Alas, there’s no such thing as a free lunch, and that’s as true in Fishing Superstars as it is everywhere else in the world. Equipment, training and everything else costs gold, energy, “stars,” or some combination thereof. Energy, which also determines how long you can fish before you need a break, replenishes at a slow but steady rate, while gold and stars are available for real-money purchases. Fortunately, gold is also fairly easy to come by simply by playing the game – the fresh fish market is very lucrative – and stars don’t really become an issue until later on, and even then remain largely optional. 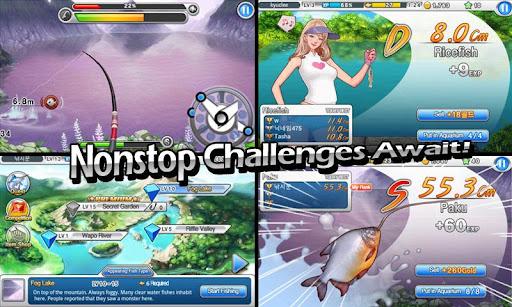 As you might expect, Fishing Superstars is a relatively physical game. You’ll flick your phone to cast, give it a sharp jerk to set the hook and work the reel with your right thumb or finger, while your left handles the angle of the pole. It’s all very intuitive, although it’s pretty easy to unintentionally cast out your line if you move your phone the wrong way at the wrong time. The system for rating casts, which run from “normal” through “good,” “excellent” and “perfect,” seems a bit random, but it doesn’t appear to have any notable impact on gameplay, and at the end of the day I’m just happy that I haven’t yet fired my phone through a wall.

Aside from the character models, which are rather bizarrely proportioned, the game does a fantastic job of rendering its various backdrops and of course the fish themselves, and the sound effects are nothing short of excellent. Crickets, birds of all sorts and the soothing rush of water come together in a remarkably relaxing and even realistic soundscape – until the moment a fish strikes, at which point the soundtrack busts open and it’s like you’re trying to reel it in with the Miami Sound Machine cutting loose beside you on the dock. I don’t think catching a four-inch ricefish has ever been such an intently and enthusiastically celebratory occasion.

Once you’ve unlocked the more challenging locations, you’ll notice that the fish become dramatically stronger and tougher, and vary their tactics considerably as they fight your efforts to land them. They’ll charge out, go limp, dive deep and work side to side, and it can be quite a job keep them on the line. As ridiculous as it sounds, I fought a salmon in Riffle Valley for what felt like ten solid minutes and it was an absolute blast, and incredibly rewarding when I finally brought him in. I actually had to get up and stretch my arms when it was finally over, and that’s when I knew I had a keeper on my hands. (The game, not the fish – although I kept the fish too.) 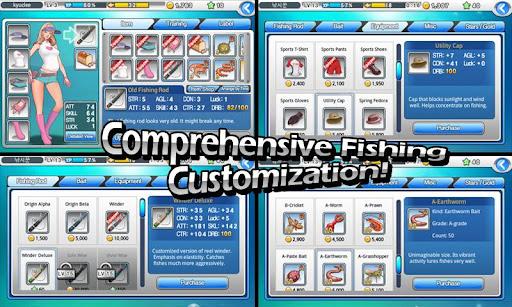 If you actively dislike fishing, there’s nothing in Fishing Superstars that’s going to change your world view.With that said, there’s a lot of fun to be had, and enough variety and complexity to keep it interesting for a long time – even for us non-anglers.