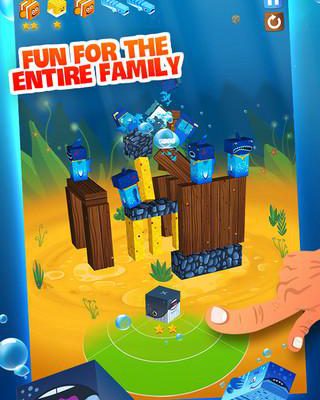 There are plenty more fish in the sea of physics puzzlers

When the evil sharks of the world are capturing and packaging helpless fish as a processed food product, something has to be done. As the unconventional Fish Heroes, it’s up to you to thwart the bullies of the sea in the only form of justice that cube-shaped fish can deliver: a Boom Blox meets Angry Birds catapult beat down.

The end result of Fish Heroes is a 3D physics puzzler akin to the recently released Catapult King. By pulling your fish backward in a slingshot apparatus, you can send the evil (but, admittedly, adorable) cube sharks to Davy Jones’ locker.

Good performance can award you three stars, and a purchasable power-up for skipping a puzzle that’s too difficult is available, as well. It seems like all the usual physics puzzler tactics are in place, but Fish Heroes does a bit to try and differentiate itself from the crowd.

The fish begin to resemble the usual pick and mix of Angry Birds weaponry, including the normal (red bird) fish, the fish that splits into multiple smaller ones (blue bird), and the fish that zooms forward after an additional tap (yellow bird). However, there are plenty of unique ideas as well, such as the spinning baracuda, the puffer fish that expands after being tapped, and the octopus that dissolves the first structure it hits.

For an upstart title, Fish Heroes has a lot of levels: 105 in total. Combined with the varied gameplay and the adorable 3D models, you’d think it’d be an amazing sleeper hit. Unfortunately, the thing that matters most is the one thing that I simply couldn’t get excited for: gameplay.

There’s nothing wrong with the controls. In fact, they’re implemented pretty well. A target reticule lets you know where your fish are about to fly, and you can fire from any starting point by panning 360 degrees around the sharks and their obstacles. The biggest issue, however, is once you’ve pulled your slingshot back and released your flying friends. 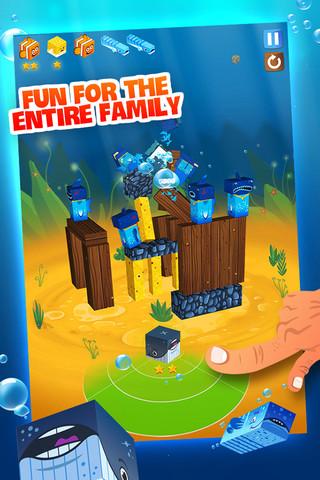 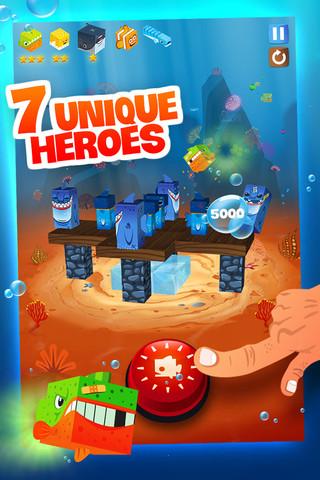 No pun intended, the end result of your collisions feels like it’s taking place underwater. Structures rarely break, and instead slowly tilt to the ground before finally slowing to a halt. For a genre that’s all about destroying as many structures and enemies as you can, impacts are slow and boring.

It also doesn’t help that the physics themselves don’t lend you any favors. There were many stages where I felt that repeating the exact same action led to different results. Sometimes my normal goldfish would be enough to knock a big shark over, while other times it feels like you’re better off throwing a ping-pong ball.

Do things get better as you unlock more powerful types of fish? Yes, but it never really ends up delivering the same satisfying destruction of many other catapult-style physics games. It never stoops to the level of being a bad game, but it’s certainly underwhelming.

All in all, is Fish Heroes bad? No, it’s just not really as astounding as it could have been. If you’re in the market for another way to wreck structures and take revenge with an unlikely team of flying animals, it’s certainly packed with enough charm and content to be worth your while. It’s just a shame that it isn’t nearly as strong as the past titles it emulates.