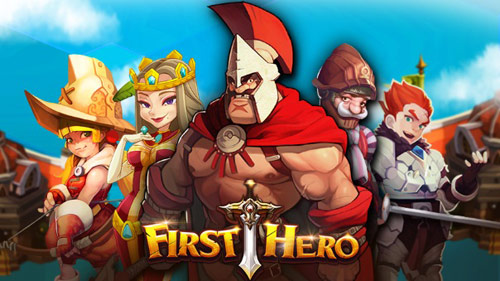 Crowded graphics when the screen fills up

To stand out in a crowded market, a city-building strategy MMO needs a gimmick. There are so many near-identical games answering this description, all of them built on the same free-to-play levelling up mechanic, all of them demanding hours and hours of your time, that players have very little incentive to put aside their current faves to try something new.

In the case of First Hero, the gimmick is that you’re playing with real historical figures, from Nefertiti (an ancient Egyptian queen) to d’Artagnan (a celebrated French Musketeer). These figures act as heroes, augmenting your ordinary units with special buffs, boosts, and skills.

But, surprisingly, these heroes are not what distinguishes First Hero from its rivals most. That honor goes to the combat, which is far more fluid and interactive than in most strategy MMOs. More on that later.

First, let’s go over the basics. Like every other city-building strategy MMO on the market, First Hero sees you creating and levelling up various different buildings within a small, enclosed city.

Your Royal Palace is the backbone of your city. Enhancing it allows you to upgrade the other buildings, along with the stuff they create, and to construct new building types too. These let you do the usual stuff – train various different units, research new weapons, store Mana, and so on. You can only enhance the Royal Palace up to your current character level.

These upgrades all take time, and you can circumvent their timers with speed-up tokens, which come in generous supply at first but soon run dry if you’re an impatient sort.

Whenever you upgrade your Royal Palace a list of the things you can now do appears on the left of the screen, encouraging you to work your way through it. And there’s a quest tab, too, which gently guides you in the right direction by, well, telling you exactly what to do, taking you to the exact point you need to do it, and rewarding you when you’ve done it.

As well as tending to your own city you need to branch out and conquer surrounding domains. Each one that you occupy gives you a steady flow of Strategic Points, which you can claim at your port. These are basically just resources of various kinds, stocking your treasury to fuel your further expansion – just like a real empire.

And, just like a real empire, yours is vulnerable to counterattack and invasion. You’ll need to stop what you’re doing every so often and send out an expeditionary force to repel invaders, as well as bulking up and finessing your defensive squad.

There are multiplayer elements, in that you can join an alliance, helping out your fellow alliance members or calling on them for help, and you can be attacked by other players too. At level 20 an Arena becomes available. It’s all quite contained and cordial, though – after a battle, your only available communication is an emoji, which certainly keeps things civil.

There’s a single player mode, too – an Adventure that sees you taking part in a procession of battles, all strung together by fun, zippy dialogue between the game’s heroes. Each of these battles sees you defeating (hopefully) another hero and then recruiting them to your cause.

That’s not the only way to recruit heroes, however. You can also summon them in the usual ways – by spending gems in different amounts depending on the number and quality of heroes on offer.

First Hero is a perfectly solid strategy MMO with bold, cartoony presentation, distinctive characters, and engaging dialogue. It takes a complex genre and makes simple to grasp without sacrificing depth. As a result, even beginners will be able to enjoy it. Out only real criticism of the presentation is that it can be difficult to make out the detail in your city as it gets busier, with the screen becoming cluttered.

But the game’s strongest element – above and beyond the hero stuff and the general level of polish – is the combat.

Battles take place on a hex grid, and you have a squad of nine units at your disposal. There are infantry, archers, and cavalry, with each being effective against one kind of opponent and ineffective against another. For instance, cavalry are strong against infantry but weak against archers.

On top of that you can send heroes into the battlefield. These confer different buffs and skills on your squad. And you can also take tactics into battle. A tactic takes up one of your unit slots, and works like a consumable skill.

Unusually for a casual mobile strategy MMO, First Hero has battles that feel genuinely dynamic. As well as composing your squads you can drag them into any hex on the front line of your assault. As your units gain ground, the number of available hexes grows, giving you greater scope for flanking enemy units, placing unit types optimally, and so on.

If you’re on the lookout for a new strategy MMO – and, in particular, if you’re new to the genre and find the games you’ve tried confusing or overwhelming – First Hero is worth a try for the combat alone.

You can check out First Hero on both Google Play and the App Store.

Total Party Kill Review: Adventure Islands is Back With Yet Another Superb Time Killer