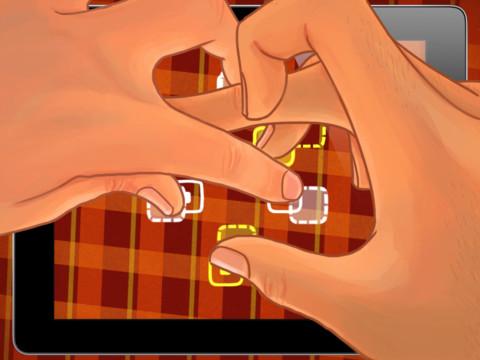 Fingle is kind of like playing Twister on a shag carpet, but with your fingers

Fingle is one of those weird apps that’s not quite a game, but really more of an experiment or experience. It’s like a non-competitive take on Twister. But with your hands. There’s no real scoring system, and no winner. Maybe it’s not a game per se, but when you’re in it, there’s no doubt that you’re definitely “playing” it.

Of course that really doesn’t sound all that hard. So Fingle adds a second color of squares, and has you bring in an extra person. Now you’ve got two hands with varying amounts of fingers moving around trying to not only complete their objective but stay out of each other’s way. Hence the Twister analogy. You’ll move though levels of varying difficulty, requiring more and more coordination and time goes on.

First thing’s first; a second person is required to play it. It’s built that way, and there’s really no getting around it. You may think you can just use two hands, and while you can do the first few levels that way, before long it turns into a ridiculous version of trying to rub your tummy while patting your head (which I’m pretty sure is physically impossible).

One hand will be sliding in a circle while the other sweeps back and forth, and it’s just too much. I mean, it’s not supposed to be played alone, so this isn’t exactly a bad thing. So grab a friend or loved one that you don’t mind getting close to, because your hands are going to be twisting and sliding all over each other, trying to get them positioned correctly in order to move to the next level.

Since each person needs to do something very specific individually, there’s this aspect of the game where you succeed or fail together. So if one person has their solution down and the other just can’t seem to do it, the first person is just kind of left there waiting. It can lead to some “I’m Trying!” moments, when you’re spinning your fingers around while trying to give verbal advice to your partner.

That didn’t happen while my wife and I were playing, but I could easily see it happening to someone. We don’t take our gaming together seriously, preferring to laugh than win. In that respect, Fingle was a huge hit for us. Especially in the later levels when you’re fingers get all intertwined trying to contort them into these ridiculous positions. 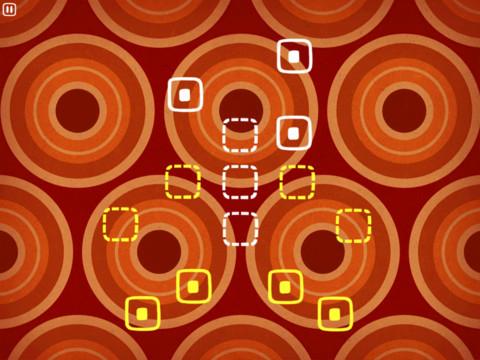 Fingle treads into interesting territory in that all this touching could potentially cross beams with Apple’s multi-touch gesture controls if you’ve got them turned on. As such, the game prompts you to turn them off while you play (even routing you directly to the settings panel) and then gently reminds you on subsequent app launches. It’s kind of a shame for it to have to be there, but they handle it with style. Not that I’m surprised, the entire app is dripping with style. There’s a cool shag carpet 70’s vibe running through everything, which doesn’t exactly make sense, but it works awesomely.

Gauging Fingle is a tough call. It’s certainly fun. But without much of a game there and no way to enjoy it single player, you really need to know what you’re getting into less you be disappointed in what you find. That being said if your gaming does meet these criteria, Fingle is truly unique and definitely worth giving a try.