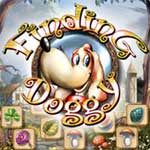 Finding Doggy from Jaibo Games is a very slow-paced match 3 game that requires relying on luck instead of strategy. Plentiful and potent power-ups remove much of the challenge, though. This can be a fun game for families to play together but will offer little of interest to most individual players.

Nothing could be simpler than the plot for Finding Doggy. Doggy, a cute mutt from Grandma’s farm, falls asleep in the back of a neighbor’s pickup truck.  Before you can say “cutscene!,” he’s miles from home, and has to find his way back.

This takes 50 levels of match-3 play. On each level, Doggy starts on one square of the grid, and you must uncover the predefined path for him to take to the exit. Squares are cleared by making a match over them, or using various power-ups.

The game is offered with both a timed and untimed version, but even the timed version is very slow-paced. Normally, a slow-paced game is set up so players can use the time to study the board and plan strategy. With Finding Doggy, though, there’s often no strategic  choice to be made. Several times a level there will be no way to move forward except to clear enough matches to eventually earn a power-up. The power-ups are so potent, though, that often a single one clears all the obstacles from the board, leaving players with little sense of satisfaction at solving a challenge. Just one hammer, for example, smashes all stones simultaneously. Grinding away making random matches until the power-up appears is more like work than fun.

Doggy is cute and the tokens (called “chips” in the game) are pretty, but there’s almost no variety in the 50 levels. You do get a few new power-ups as you go along. New obstacles show up, too, but since no matter which one you get you’re going to need a power-up to remove it, they’re not very interesting.

Although the game feels undemanding, we can’t wholeheartedly recommend it for kids. Sometimes the only way out of a stuck situation is to understand exactly which direction chains have to be made, or when to use a power-up from the side. We think kids under 11 would be frustrated and older kids playing on their own would be just as bored as adults.

However, while the slow pace of the game is annoying for an individual player, it can make group play more fun. There’s plenty of time for everyone to search the grid looking for a match. Each level has a “special shape” like an L or a stairstep—if you can make a chain in that shape at any time on the level, you get bonus points. Looking for these can also be fun in a group.

It’s almost impossible to lose a level, and even if you do, you’re allowed to continue immediately from the same point, so you might as well use the time to socialize. There are also a good variety of trophies, which pop up as a nice surprise when you’ve, say, reached 5,000 chips or 150 “special shapes.”

The game includes 6 bonus screensavers of locations on Doggy’s journey that you earn as you move through the game. Each screensaver starts out as an easy jumble puzzle that must be unscrambled before it can be used. These are simple cartoon landscapes, but it’s a nice touch.

This could be a particularly good game for an adult to play with a couple of kids of different ages. Younger ones can just look for matches while older ones can look for the “special shapes” and power-ups. And the adult can keep the game moving forward. The group can also vote on which power-ups to use when. For group play, we’d recommend playing in untimed mode, so you don’t get into arguments over who’s using too much time.

In the past, Jaibo Games has been known for match-3 games that were unimaginative, but still challenging and fun to play. Their Heroes of Hellas was a hit for good reason. Finding Doggy is a step back from that, as it’s just too slow-paced to hold the interest of most adults. But if you’re looking for a new game for family play, give this one a try.