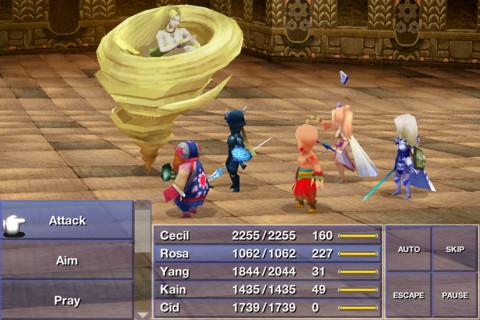 The best version of one of the best Final Fantasy’s to date.

It’s no secret that Square Enix loves Final Fantasy IV: it’s the second-most ported game in the Final Fantasy series and one of only two Final Fantasy titles to be completely remade thus far.  It received a sequel 17 years after its initial release (a favor usually reserved for a game’s primary life cycle), an extra character in Theatrhythm Final Fantasy (as did Square’s top-grossing Final Fantasy VII), and a two-volume novelization.  Square’s (and its fans’) love affair with Final Fantasy IV continues in its recent iOS release.

In every iteration, Final Fantasy IV tells a story of friendship, sacrifice, and salvation.  You take on the role of Cecil Harvey, a Dark Knight of Baron, who is developing doubts about his king’s moral intentions as the game begins.  After being sent on a genocidal mission to exterminate an entire village of summoners, Cecil’s doubts become full-fledged determination to atone for his sins as a Dark Knight and stop the king’s power-mad plot.  His journey quickly uncovers a much larger and more sinister evil at work, which requires Cecil–and the many friends he meets along the way—to travel around the globe, to its center, and even into space in order to protect their world from destruction.

Final Fantasy IV has always been applauded for placing significant focus on its dramatic plot and characters’ evolution, which was not a given for role-playing games at the time of its initial release in 1991.  Despite featuring 12 playable characters, only five are available to your party at a time, meaning characters often join and then leave—sometimes permanently, through death—according to the whims of the story.  There are numerous plot twists, surprises, and genuinely heartfelt moments that still hold up today, over twenty years after the story was first told.

These moments are enhanced in the DS remake of Final Fantasy IV, which is the version that has been ported to iOS.  With a complete 3D graphical overhaul as well as added voice acting in cutscenes, characters’ actions are much clearer and more significant: Cecil actually slaps Edward, Leviathan’s attack on the ship is more explosive, Palom and Porom’s unforgettable gift in Baron is even more touching.  The iOS port has enhanced the graphics even farther, removing the blurriness of the DS version and leaving us with crisp character models and bright hand-painted backgrounds. 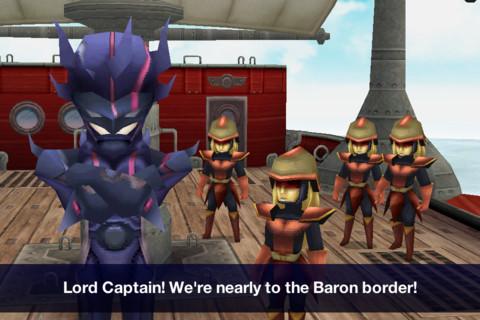 The difficulty of this version holds more true to the original Japanese release, and not its “easytype,” watered-down American SNES title, Final Fantasy II.  Enemies require a strategy beyond merely choosing “Attack” repeatedly, negative status effects are plentiful and dangerous, and even equipment limitations—such as only Rosa being able to equip bows—have been added.  The augment system of the DS version is also present, allowing for bonus skill enhancements to your characters—like Fast Talker for speedy spell-casting or Safe Travel for no enemy encounters—to improve their fighting chances. Although the translation is also more accurate, with actual references to death and items like “Potion” instead of “Cure1,” memorable fan-favorite moments such as “You spoony bard!” have been retained, along with the game’s overall whimsy.

All of the charm, challenge, and nostalgia of the original Final Fantasy IV is available here, and thankfully so is its playability.  The iOS touch controls are precise and fluid: the virtual joystick used to move around the world map appears wherever you tap, allowing for great flexibility.  Despite forfeiting the second screen of the DS, no information is lost in the transition except for the overworld map, which must be accessed via a separate menu.  Because of the slightly less precise controls of touch versus a joystick, the iOS port has added an alert feature during exploration—an exclamation point appears over your character’s head to indicate an object or person of interest that you’ll want to investigate.  This is a twofold improvement, making searching for items in areas like pots and grass much less tedious than in previous versions. 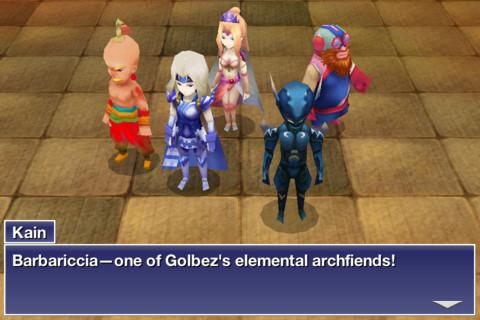 Despite its consistently equal or better comparison to the DS version, the iOS game does have a few issues of its own.  The in-battle menu, which features character action choices—like Attack, Defend, White Magic, etc.—on the left, their health status in the middle, and special options like Escape and Auto-Attack on the right, cannot be rearranged.  This leaves battles feeling designed for left-handed players, as you’ll primarily be using your left hand (or crossing the screen with your right) to make most fighting decisions.  The augment system is still not explained in any detail, despite its complexity and the fact that explanations for additions like Game Center achievements (another great new feature) were included.  And with Whyt’s removal (Rydia’s special summon who was added to the DS version, mostly as a touchscreen gimmick), the placement of Fat Chocobos around the world is strange and potentially confusing: this was added to towns in the DS game to allow for playing Whyt’s mini-games, yet not removed from the iOS version.

Overall, though, the iOS Final Fantasy IV is arguably the best version of the game to date.  With subtle enhancements of the hugely overhauled DS version, Square Enix has provided fans a reason to own the game on yet another system, and newcomers a chance to experience one of the series’ greatest entries in peak form.  Just as Rosa joins the party to stay close to Cecil, this is a game worth keeping with you at all times.