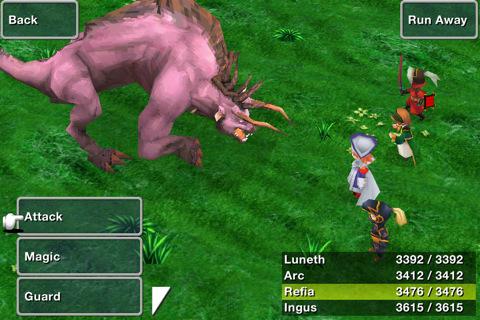 Even if it’s over twenty years old, a game can still be a ton of fun to play so long as it’s well-made. Case in point: Square-Enix’s Final Fantasy III. It was one of those titles that helped revolutionize the RPG genre when it first was released in Japan on the original NES console. Now an updated version of the game has just come out for the iPhone, and it’s still a blast to play.

A little background: This was the Final Fantasy game that revolutionized the franchise because it featured summoned characters like Shiva and Bahamut, not to mention a job system that allowed players to change their characters’ classes at any time they wanted. However, it was never released outside of Japan. Instead, the Final Fantasy III that was released for Super Nintendo systems in North America was actually Final Fantasy VI in Japan.

Square Enix finally released Final Fantasy III here in Western markets for the Nintendo DS back in 2006 – although this was a remake that featured stunning 3D graphics. It’s this port that was recently released on the App Store, and it looks even better than the DS version because SquareEnix has tweaked the graphics to look even sharper and brighter on the iPhone’s Retina display.

The story takes place on an anonymous planet where, thanks to an alien race that appeared on a floating continent a thousand years ago, a war is going on between the forces of light and dark. When the game begins, four orphans from the village of Ur get drafted as the latest batch of heroes to fight the good fight. Naturally things turn epic quickly, and eventually the fate of the world is at stake. This is a full-fledged Final Fantasy game, with a massive story that lasts for quite some time, and the fleshed out main characters do a lot to make the length never really feel tiresome.

Another way to keep things fresh is to change up characters’ jobs. Players can swap professions on the fly and use special skills and gear. In the original version of the game the job system was rather unbalanced, but the remake has fixed this problem nicely and actually makes experimenting with different character classes fairly enjoyable. 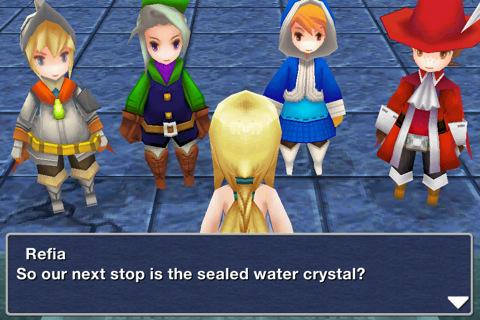 The game features on-screen controls, including a virtual joystick that works extremely well. On top of that, players can zoom in to get a better look at the environments, which is extremely helpful when players have to find specific objects in certain areas. That said, the objects don’t always sparkle when the camera is zoomed out, which can make searching for them a bit painful at times.

The game’s combat is still turn-based, which is a staple of the series. Fans of western-style RPGs like may have a tough time enjoying these types of battles if they’re used to fast-paced combat that occurs in real time. For me this was a pleasure, because I grew up playing these types of video games, but it may not be for everyone.

At the moment there are a ton of great RPG’s on the iPhone, and Square Enix has a tradition of putting out quality titles (like Chaos Rings) for the platform. However, Final Fantasy III is easily the best game that SquareEnix has released for the App Store. If you’re a huge Final Fantasy fan, or if you just happen to love old-school RPGs, then it’s easily worth price of admission.