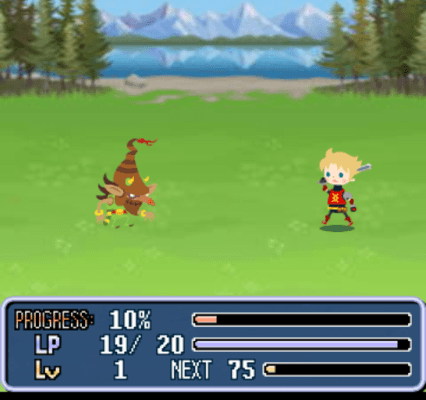 Like a (phantom) train wreck you just can’t look away from.

I honestly can’t explain the appeal of the Mafia Wars-style “casual text MMO,” which basically uses its players’ impatience as currency.  It’s a strange brand of freemium game that seems to draw users into any incarnation, whether it’s yet another mob-builder like iMobsters, a collectible card “adventure” like Rage of Bahamut, or an only semi-related “spinoff” to a popular series, like Final Fantasy Airborne Brigade.  As baffling as the genre’s popularity is, I’m even more confused by this newest development: I can’t stop playing Airborne Brigade.

As far as freemium, social-focused, text MMOs go, Airborne Brigade has most of the expected features.  You’ll gain experience and levels through quests, which cost rechargeable energy (LP) to complete.  You can join up with friends and other players into parties for strategic advantages.  And you’ll spend most of your time clicking single buttons to do anything, from fighting Espers to enhancing weapons. 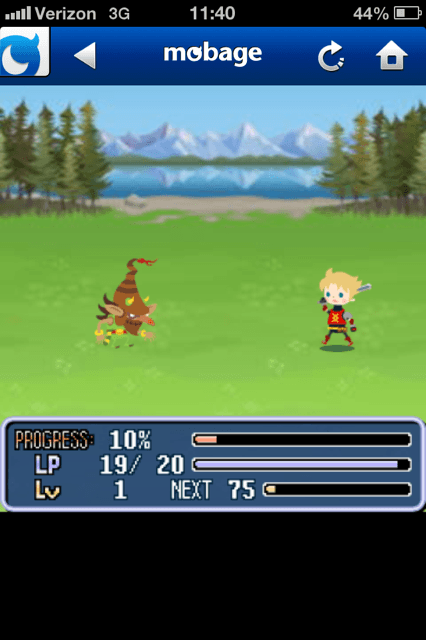 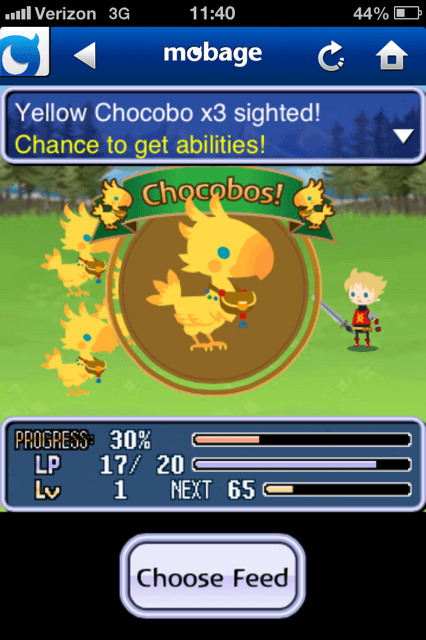 Where Airborne Brigade feels different is first, its obvious Final Fantasy wrappings, and second, its focus on smaller groups and collaboration as opposed to highly competitive player-versus-player goals.  Upon starting the game, everyone is automatically assigned to a brigade—a group of 20 players.  Your brigade is essentially your guild, and you’ll work together in Brigade mode to bring down boss monsters, like Grenades, and Espers like Ifrit, who are much stronger than any enemy you’ll encounter in the single-player Quest mode.  The competitive aspect comes from the fact that you’re both collaborating with and competing against another similarly-ranked brigade that’s assigned as your rival for the week.

When a Brigade-level monster appears—discovered by anyone from the two rival brigades during a Quest—all players from those two brigades will be alerted and invited to go attack the monster.  While Quests require LP to progress, Brigade battles use rechargeable Brigade Points (BP).  Every player, no matter their level, will only have three BP max at any given time, allowing them to either attack normally up to three times (costs one BP), or launch a more powerful “all-out attack” for all three BP.  With Espers and other boss monsters having multiple thousands of health points, it typically takes numerous attacks from both brigades to bring one down.

If the monster is defeated before it escapes (brigades usually have about a half-hour window to launch their attacks), awards are handed out to the brigade that discovered the monster, dealt the most damage, and landed the killing blow.  Any brigade member who took part in the battle, no matter their contribution, receives their brigade’s reward(s).  Brigades also receive points for taking part in these battles, increasing their rank amongst all players (not just their rival brigade) and earning additional daily rewards.

Brigades are split up and reassigned every Sunday night to allow for rebalancing and players to meet new friends.  You’re only ensured to be in someone’s brigade if you’ve joined the same party, but parties have a maximum of ten members—a way to make sure no brigade is too overpowered. 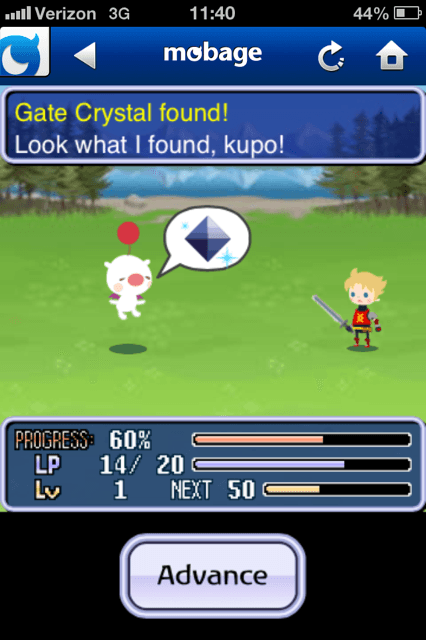 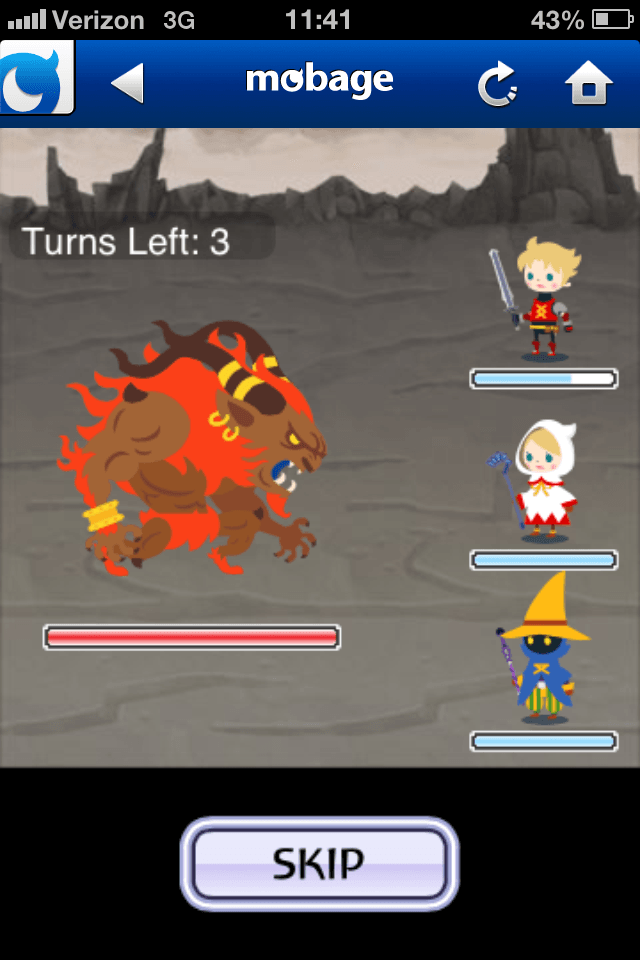 Although the experience of playing Airborne Brigade is primarily jumping back and forth between leveling up via Quests and assisting your brigade in Esper battles, then waiting for points to recharge and doing it all again, there are plenty of little Final Fantasy and RPG-inspired nuances that add to the game.  You can change and level up different jobs, like Warrior, Monk, and Red Mage, to unlock stronger ones like Paladin, Dragoon, and Ninja.  You’ll sometimes come across Chocobos that may toss out magical abilities you can use in battle (assuming you feed them gysahl greens or vomp carrots).  There are tons of different weapons to find and try out—from greatswords to rods, daggers to guns—with varying rarities, elemental effects, and strengths.  I do occasionally find myself out of energy and waiting on a recharge (too stingy to use a potion), but rarely without anything to do—leveling up weapons and magic, selling off old gear for Gil, or sending messages to my party keeps me busy during the fairly short wait before my LP and BP come back.

These are all things that work for Airborne Brigade, and have kept me hooked so far.  Unfortunately, its list of issues is extensive.  The first problem you’ll notice is one it shares with Rage of Bahamut: a complete lack of sound or music to any degree.  This is an absolute shame in a Final Fantasy-themed game, a series known for its gorgeous songs and memorable effects.  It currently also lacks any way to search for a specific player—which means adding your real-life friends to this highly social game is nearly impossible.

The game’s tutorial and FAQ are both disorganized and jump all over the place, making tracking down info a quest in itself.  After slogging my way through the majority of the FAQ entries, I’ve found some aspects of the game are never explained: whatever BP stands for (I assume Brigade Points, but it could be Battle, Brawn, Balthier…) and how quickly it recharges is never mentioned, the currently inaccessible areas of “Mog Bank,” “Fat Chocobo,” and “Limit Break” are not covered (nor is a timeline offered on when they will be available), and the idea of “KP”—which appears to be the currency of in-app purchases and the only way to buy items from the shop—is not mentioned even once. 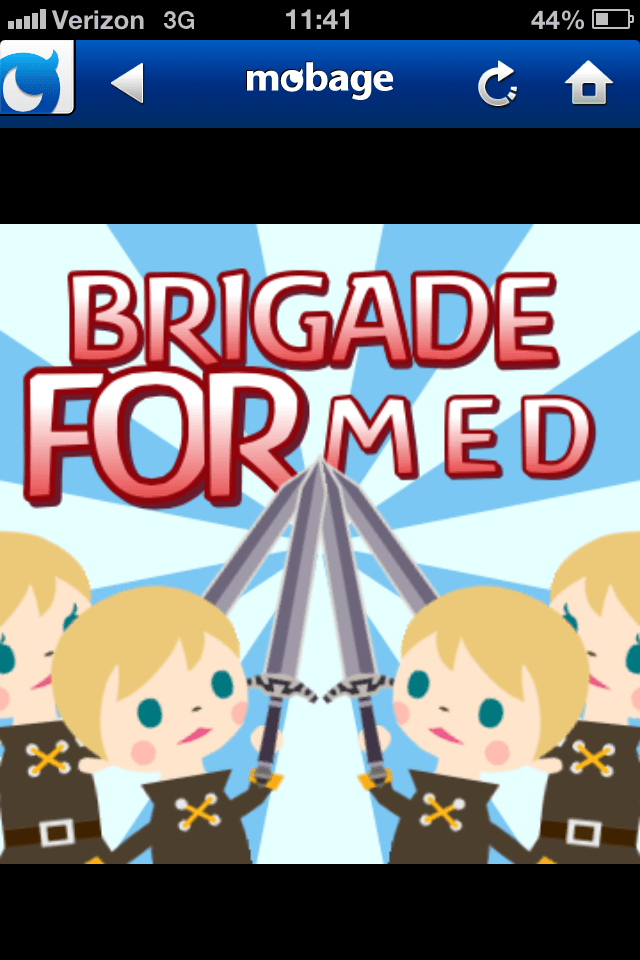 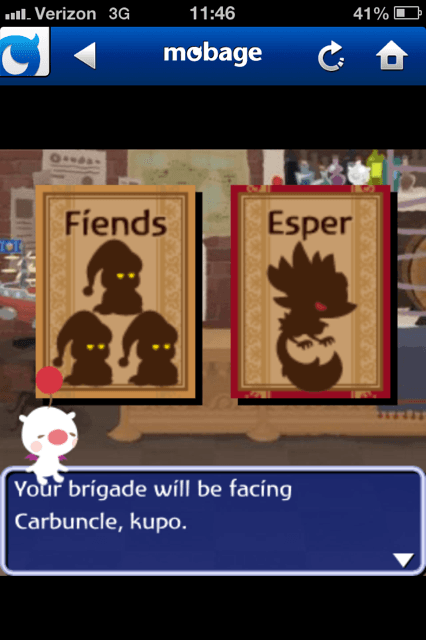 Although the Final Fantasy theme is an easy draw for fans of the series, it often feels more like a costume than an actual part of the game.  Yes, you will fight Espers, level up classes, hang out with Mog, and quest through recognizable locations, but these are just a hodgepodge of features that are reminiscent, but not definitive of, Final Fantasy games.  You don’t control any aspect of a battle outside of what you’re equipped with, “exploration” is merely clicking “advance” on the quest area that is currently available, and every character—besides their class and gender—is identical and interchangeable.

Besides this, and all the other little things that are sure to irk players—like the clock being set to PST with no way to change it, the useless Mobage header constantly present on every page, and the fact that the Icebrand sword is given to every new player and is better than most weapons you’ll find for 30+ levels—I’m still playing Airborne Brigade.  The sense of accomplishment you get from helping your brigade, the constant stream of rewards and upgrades, and the balanced rivalry and recognition everyone receives is encouraging and addictive.  If its issues aren’t resolved, these won’t be enough to keep me playing; but for now, I’ve got an Esper to “fight.”