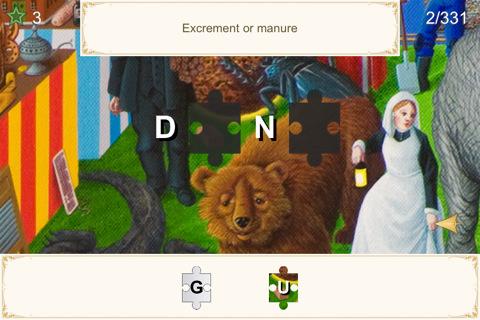 When Ultimate Alphabet hit the App Store last year, it revived a fabulous word puzzle from the 1980’s, using a vast canvas with hundreds of words behind each, and every detail using a common theme. In Ultimate Alphabet, the theme was similar first letters. Filth Fair uses poop, grime and evil.

Like Ultimate Alphabet, Filth Fair relies on you tapping on various parts of a huge image to discover 331 words. Almost every single thing you see has a word (or multiple words) associated with it. You can pinch to zoom in on the image to find every last item. If you’re fortunate enough to play this on an iPad, Filth Fair is really great in both the visual and ease-of-play departments.

Filth Fair‘s gameplay, as you could probably surmise, is identical to the first game. (For a very detailed explanation of the gameplay, check out our Ultimate Alphabet review.) Finding an object presents you with the number of words you need to find associated with it, along with various clues and hints to help you figure it out. Based on the number of clues you use, you’re awarded a gold, silver or bronze star along with coins. The more stars and coins you find, the more awards Filth Fair are unlocked for you – and like Ultimate Alphabet, there are a lot of achievements.

While the two games are similar, not everything’s the same in Filth Fair as it was in The Ultimate Alphabet. For instance, after finding a certain number of words you can earn a hint star that shows a word you’re missing on the puzzle. Another fun feature, the dice roll, randomly chooses an object for you to play. For a real challenge you can choose to have Filth Fair disable certain clues, hints and help boxes.

Despite all of the steps forward, though, Filth Fair spins its wheels in a lot of ways. Eagle-eyed readers will notice that the “cons” section of this Filth Fair review is basically identical to the Ultimate Alphabet review. Once again there is no music playing, which is nigh inexcusable in a game that may have you playing for long stretches on a multimedia device meant for music playback. And once again, if you don’t understand how cryptic clues work, they’re useless to you (fortunately there are other hint systems, but the biggest one is likely inaccessible for most users). Typos on the part of the player are still outright refused, causing a drop in the level of award you receive for finding a word. And for American players, the European spelling may not be favourable (sorry, favorable). 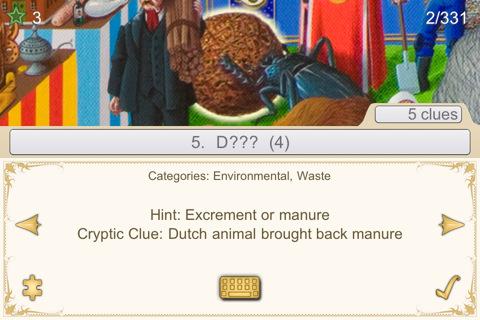 The biggest problem with Filth Fair is that the theme isn’t all that fun. Finding 331 words associated with evil, dirtiness, sanitation and ill morals isn’t something that a lot of people will find appealing. Considering a lot of the Ultimate Alphabet appeal is in the clever themes it has, the theme in Filth Fair comes off pretty weak.

If you enjoyed the first release of Ultimate Alphabet, then Filth Fair is more of the same. Some of the improvements are great steps forward in bringing the experience to a new level, but there are a lot of kinks left in Filth Fair that really need addressing. Nonetheless, with a bit of work, Toytek’s art-meets-word puzzles could become a great intellectual brain-teasing franchise for iOS. That alone is worth cheering for.