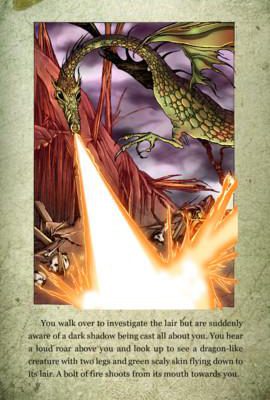 The Forest of Doom is a lightweight paperback adventure that lacks the sophistication to satisfy.

The latest adventure game book from Tin Man Games, Fighting Fantasy: The Forest of Doom is a challenging, but not terribly sophisticated sword-swinging romp through the foreboding, monster-infested Darkwood Forest.

Fighting Fantasy: The Forest of Doom is based on an old-time game book of the same name, originally published in 1983. I’m not familiar with it, but I looked it up on Wikipedia and I’m pleased to say that the cover on display there is virtually identical to the one that greets you when you launch the digital edition; with the notable exception that this new version is gently animated, granting a slow, dangerous motion to the wicked-looking creature on the front. It’s an impressive start. 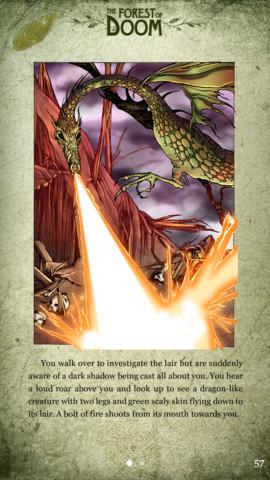 The story sets you up as an intrepid adventurer who, through a strange twist of fate, embarks upon a quest to recover the Hammer of Stonebridge, a legendary weapon that will save a nearby settlement of dwarves from an onslaught of trolls. Alas, as so often happens, the hammer has been broken into two pieces that have fallen into the possession of local monsters, and if you want the big payday you’re going to have to find them both and return them to their proper home.

The Forest of Doom looks and sounds very good, with a clean, simple interface, sharp fonts, plenty of colorful illustrations, and a strong soundtrack. An automatically-generated map helps you keep track of where you’ve been and where you’re going; bookmarks allow you to save spots for later play (or to recover from a dangerous move that doesn’t work out quite as planned); and the character sheet is simple to read and understand.

That simplicity, in fact, runs through just about everything in the game, and in many ways it’s a big part of the appeal. Your character and your opponents have just three stats – strength, stamina, and luck – and the formula for determining victory in combat is simple and easy to understand. Descriptions of locations tend to be short and to the point, and options to use inventory items are presented automatically whenever appropriate. This is an adventure that you can dive into and chew through pretty quickly and easily – untimely death notwithstanding. 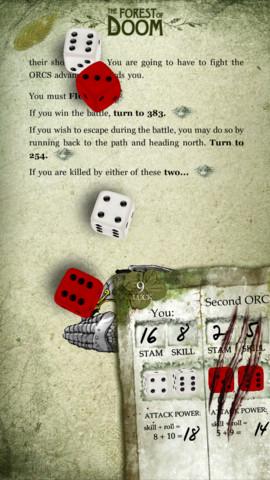 But that simplicity also means there’s not much to see here in the way of descriptive flair or nuanced storytelling. The forest in which the game is set feels more like a jumbled collection of random locations than a cohesive “place,” and most monster encounters are almost completely interchangeable despite the wild variety you’ll meet (and kill), from gremlins and hobgoblins to wyverns and giants. It’s very thin fantasy, the sort of lightweight swords-and-sorcery paperback stuff that a bored 12-year-old might find engaging – which I suppose, given the source material, is probably appropriate.

The interface is well-designed and easy to use, but I found it was often very slow to respond to touch, sometimes taking several seconds before registering a button press or bringing up the user menu; this could be the result of playing on an aging iPhone 4 as it’s also rather slow to initially load, but for what it’s worth I find it hard to imagine a game like this being overly technically demanding. The buttons themselves are also tiny, although their size can be adjusted along with the font itself, and if you’re playing on an iPhone you’ll almost certainly want to increase it considerably.

As is often the case with game books, The Forest of Doom will kill you quickly and often. You’ll actually start off as a fairly powerful warrior if you have any kind of decent dice rolls during character generation, but your strength, stamina, and even luck will all be worn down over the course of the game and opportunities to replenish them are few and far-between. Having a diminished luck score is particularly problematic, as good luck will allow you to avoid a lot of dangerous and potentially deadly situations, but each time you use your luck it’s reduced by one point and sooner or later the odds will turn against you. 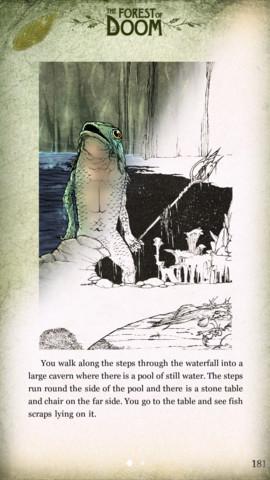 Making choices is the crux of adventure book gameplay, but I occasionally ran into situations in The Forest of Doom in which I felt as though some very important choices were taken out of my hands. If you stumble upon Stonebridge without having the complete hammer, for instance, your only option is to return to the forest and continue the quest, but you’re not allowed to stay in the village to recuperate or resupply first, and as soon as you re-enter the woods you’re greeted with an unavoidable luck check that will leave you dead if you fail. If your luck is down – which is quite possible at that point – it’s game over, despite the fact that you successfully reached the village and by all rights should have been given a chance to recover.

And if you do pass the luck check, you’re put back at the very beginning of the game, complete with the initial encounter that started you on your quest, and completely without any of the inventory you accumulated on your travels. That may be truer to the beginning-to-end spirit of game books than an open-ended waltz through the forest, but saying, “The search continues! Turn to page one and start over” feels cheap, especially since everything appears to reset. It’s not a huge investment in time and effort – The Forest of Doom is quite short, the trip to Stonebridge likely doable in under an hour – but while it’s obviously meant to be replayed multiple times, the disconnected, binary choices and enforced restart if you happen to make a wrong turn and end up in Stonebridge prematurely didn’t do much to make me want to leap back into it.

In spite of all that, The Forest of Doom is actually pretty good, and packs in some nice extras including achievements, an extensive art gallery that catalogs your encounters, a history of the Fighting Fantasy series and the story behind The Forest of Doom. The biggest knock against it is simply that it lacks sophistication. If you’re after a light, breezy game book you can blow through in a lunch break or two, Fighting Fantasy: The Forest of Doom will do the trick nicely; but if you’re looking forward to a tale with some meat on the bone, you’ll probably find this one a little too scrawny to satisfy.