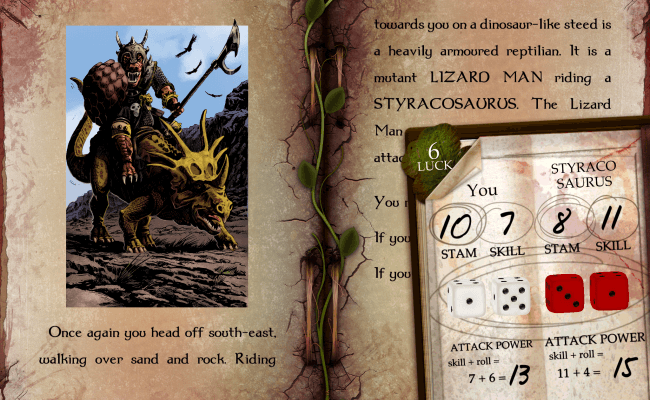 Welcome to the digital jungle

The final paragraphs of the gamebook Island of the Lizard King contain a scene I can still remember clearly today, nearly thirty years after I first read it. It stamped itself on my ten-year old brain because it seemed so hideous at the time. I’m made of sterner stuff today, and was positively anticipating re-living those climatic moments on my iPad.

As a digital gamebook, you’ll spend most of the time reading paragraphs of text and then being presented with a series of possible choices at the end. In this way, you work your own chosen path through a work of fiction. Occasionally you’ll be called on to fight creatures or test one of your three statistics, all mediated by dice rolls with a slick and satisfying system. 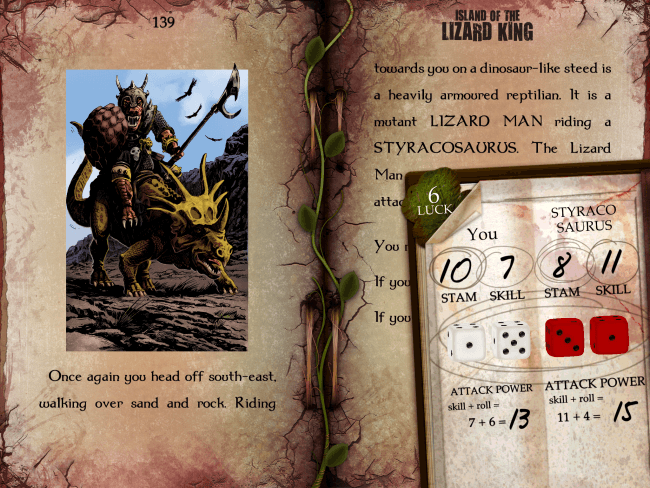 As the title suggests, the plot of this tale sees you travelling to a tropical island to search for, and hopefully dispatch, a deranged lizardman who’s been terrorizing local populations with slave raids.

It’s classic penny dreadful material, and the book takes obvious and colossal glee in shoehorning as many boys own adventure stereotypes into the material as it possibly can, and throwing in a fistful of fantasy for good measure. You’ll battle dinosaurs and giant crabs, consult with feathered shamans, and explore trackless jungle and steaming swamps.

Everything’s just tossed into the cannibal’s cooking pot and boiled on an open fire. It’s tactless, blundering, occasionally even mildly offensive to modern sensibilities, but done with such pleasure that you can’t help be sucked into the soup.

The elements of the adventure itself are similarly straightforward. There’s very few of the tricks, traps and puzzles that litter some of the earlier Fighting Fantasy gamebooks. Indeed I recalled this as being one of the easier titles in the series in terms of safely charting your course through the Island. I didn’t remember too many super-tough battles either.

My memories were largely correct, although some of the monsters were certainly nastier than I was expecting. As a book, I found this relatively disappointing: it was so easy to cheat and flip back and forth through the pages that I kind of wanted a bit of challenge from the choices. 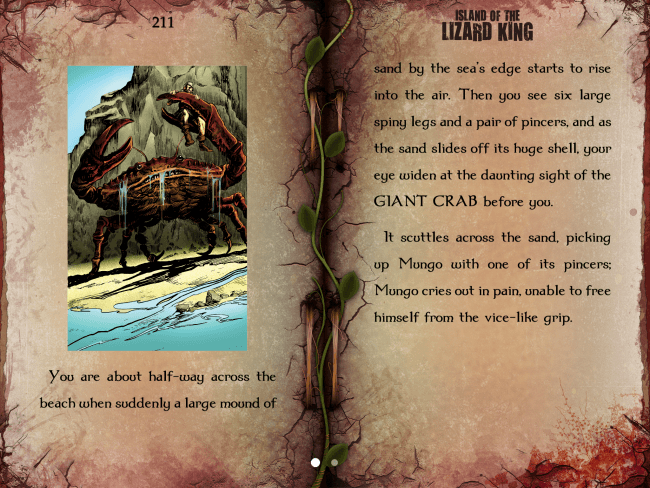 But on iOS, the feeling is different. You can still cheat if you want to, since it’s one of the three difficulty modes offered when you start out, but there are bookmarks to add and buttons to press to make it happen and it all feels marginally more cumbersome and guilty-ridden, which puts you off. Besides, there are fun achievements to unlock and great art to track down.

So the fact it’s a relatively simple ride actually works well in the digital format. It encourages you to make repeated attempts, dig into different paths through the story to its gruesome conclusion, and tick off all the things there are to find. And with such a smorgasbord of classic jungle adventure on offer, there’s a particular thrill in going for the completionist’s checklist.

To add to the atmosphere, there’s a wonderfully sparse soundtrack with a mixture of modern synth sounds and classic jungle noises. The book pages have been graced with creeping jungle vines and the original art reproduced with added colour. You can turn off these enhancements for the classic experience if you want, but I found them excellent upgrades.

Island of the Lizard King was originally written in 1984, and it shows. By the standards of modern fantasy, it can sometimes seem clumsy and crude. But besides being a great nostalgia trip, it reminds us of the simple excitement that sophisticated fantasy has lost. Sometimes those primal thrills of adventure and exploration get buried in the desire to justify and explain everything. Besides, any book that lets you fight a lizardman riding a styracosaurus gets two thumbs up from me.