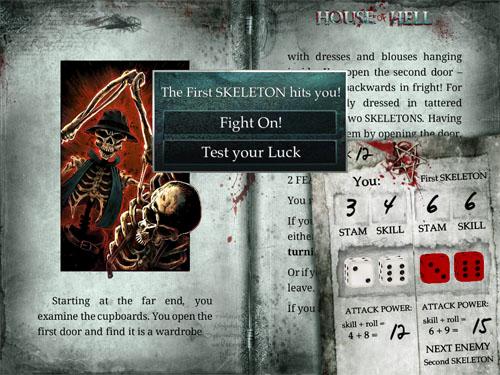 House of Hell was unquestionably one of the most unusual and memorable of the original Fighting Fantasy gamebook series. First published in 1985, its modern-day horror setting stood out amongst a sea of generic fantasy and science fiction stablemates. That’s likely in part why Tin Man Games has chosen to make it this, tenth in the original line-up, the second of their Fighting Fantasy iOS releases.
All gamebook apps share the same basis. You read a paragraph and then choose between a number of options at the end to carry the story forward, meaning you control the plot and allow the book to present you with puzzles and strategy. There’s a simple combat system where each combatant rolls dice and adds a skill factor, the highest total inflicting damage to his opponent’s stamina score. House of Hell also uniquely features a Fear tally, a gradual accumulation of points which will scare you to death if you encounter too many shocks.

The structure of the book is odd, but effective. Novels, and most gamebooks, have a flowing narrative to follow. House of Hell by contrast has an overarching plot but the bulk of the game is spent encountering set-piece scares, facilitated by the room-based architecture of the house itself. All the classic horror tropes are in the book somewhere, from demons to vampires, accompanied by suitably gruesome art, recycled from the original with added colour.
The app uses its room-by-room set up to full effect. Unusually for a gamebook you can actually enter and leave many of the rooms through different doors and directions on different playthroughs. It’s clever, and consistent, but a map maker’s nightmare.
And that’s important because this is a fiendishly difficult book to complete. To win you’ll need to acquire a shopping list of important items and to get those you need to not only be in the right place but also with precisely the right prerequisites in place. Multiple play-throughs will be required. A map is essential. So is a great deal of patience. The Fear score aspect of the game adds considerably to this issue because a low Fear roll virtually guarantees an early death and a restart.

“ However what could have been a deal-breaker for a lot of gamers in terms of teeth-grinding frustration is alleviated by the choice of difficulty modes. You can play on hardcore and suffer all the angst I’ve described. Or you can go with free play, which allows you to take options that should be closed to you, such as those associated with winning fights you lost, or needing items you haven’t picked up. It’s a perfect addition, allowing you to explore the book and learn the useful paths before trying a hardcore run for the ultimate accolade.
You can of course be happy with a cheater’s ending. But Tin Man discourages this with their usual wide and wonderful selection of achievements, of which a hardcore victory is merely one. If that’s not enough to motivate you the app also ticks off the gory pictures as you encounter them, with dedicated players eventually unlocking an alternate cover. 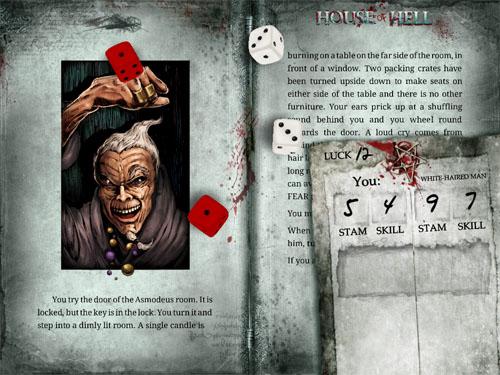 “ All the other hallmarks of the Tin Man treatment are also to be found in House of Hell, including an atmospheric soundtrack, good use of multimedia and smooth and easy usability. In their old Gamebook Adventures series, combat could be annoyingly drawn out but the Fighting Fantasy mechanics are less chaotic, and care has been taken to keep fights fast and exciting, with all the participants rolling their dice at once.
House of Hell might not have been amongst the very best of the original Fighting Fantasy series, but Tin Man have made the most of the opportunities afforded by the digital transition to improve on the paper version, and make it as fun as possible. They managed a similar feat with their previous effort in the franchise, Blood of the Zombies. On this evidence, I can’t wait to see what they’re going to manage when they come to tackle the most acclaimed Fighting Fantasy titles.

No Time to Explain Review