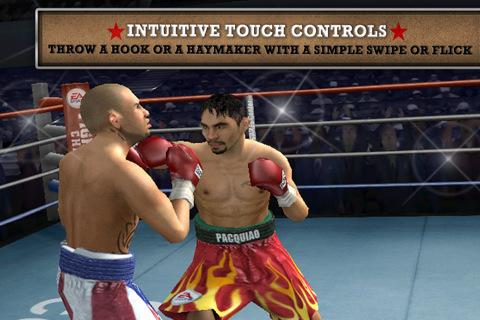 For years, boxing video games were marked by the occasional mediocre release and a panged longing for the days of Mike Tyson’s Punch-Out. Then EA returned pride to the gaming world with the debut of Fight Night in 2004, a boxing simulation that showed gamers the sweet science could be about far more than button mashing. Now, 7 years and 5 games later, Fight Night has made its way to the iPhone.

Fight Night Champion takes the precision and finesse that the series is known for and shrinks it down to pocket size. But don’t let its diminished stature confuse you: this game still packs one hell of a punch.

Like its console brethren, Fight Night Champion is all about mastering a variety of punches and blocks in a manner that approximates the real fighting experience as closely as possible. This is accomplished on home consoles by treating the left and right analog sticks as your left and right fists. Tapping the left stick up might cause your boxer to through a left-hand uppercut, for example. Or tapping the right stick to the left might have him throw a jab. Total Fight Control, as the system is known, offers a unique and deeply satisfying alternative to the button-mashing found in most other fighting games – but how does it translate to the iPhone’s touch screen?

Surprisingly well. Players will place their thumbs on the left and right side of the screen. Sliding upwards powers an uppercut. Sliding left and right triggers jabs and hooks. Holding both fingers down on the top half of the screen will block your head. Wiggling around your fingers during a block will cause you to lean. Fight Night Champion offers a control scheme that’s just as deep and satisfying as its console brethren. This alone makes Fight Night Champion king of the ring when it comes to iOS boxing games.

But the wonderfully deep control scheme brings the game’s one glaring flaw to the surface: it’s severely lacking in the tutorial department. With the exception of a lengthy help screen that acts something like an instruction manual, the only information players have to help them along their way is a set of simple flash cards that appear while your next fight is loading. Even long time fans of the series will no doubt feel the frustration in having to constantly pause the game to refer back to the help menu until they have the basics mastered. Comprehensive tutorials have been a staple of the Fight Night series in other incarnations. Why they would skip one here when introducing an all new touch screen control set-up is completely beyond me. 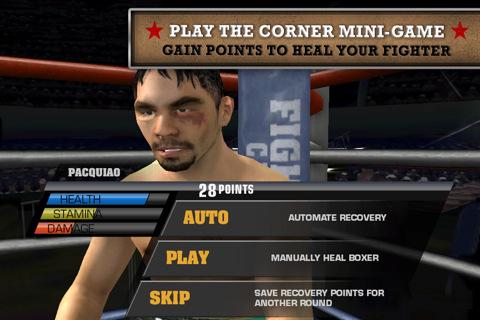 The tutorial isn’t the only thing missing from previous versions either. While two friends can pummel each other locally, online multiplayer is nowhere to be found. Training mini-games are completely absent, and even the ringside mini-games to reduce swelling and cuts and whatnot have been replaced by a dull menu-based system.

With only two modes – a quick fight mode that lets you pick classic fighters (like Ali, Tyson, and Foreman) and a legacy mode that lets you build your own career (or relive one of the greats) – the Fight Night Champion experience remains largely the same throughout. Thankfully it’s a joyous experience for fans of the series, and one that would take some real time to grow tired of.

As a game that favors timing, patience, and well-placed attention over button-mashing controls and bull-headed behaviour, Fight Night Champion manages to deliver a knockout performance for gamers who’d rather polish their skills than throw fireballs and do crazy spin-kicks through the air. Fight Night Champion keeps it clean, and comes out fighting.