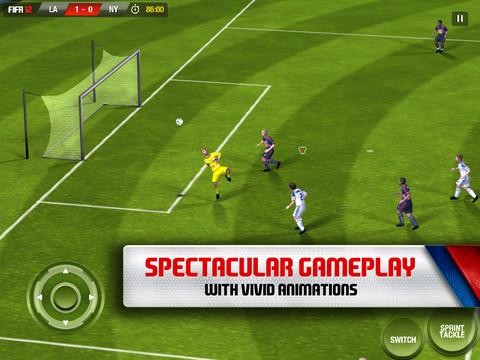 You know, for a good long time now I’ve tried to avoid games on my various touch screen devices that have been ports of full-on current console games. A game that runs on an Xbox or PlayStation really doesn’t usually benefit by being crammed onto such devices, having the controllers removed and replaced with virtual ones. This philosophy has served me pretty well thus far. FIFA 12, however, is going to make me start changing my tune.

The controls are handled surprisingly well, and are easily the most common part where console to touch screen transitions falter. Obviously the controls at your disposal aren’t as complex as the console iteration, but they get the job done nicely with a minimum amount of virtual buttons, by incorporating swipe motions. For example, hitting the pass button and then swiping upwards makes your player lob the ball. Or you can give commands to individual players on the field by tapping them, though that’s easier said than done while a game is going on.

In a very nice twist to those of us that don’t like to cover the gameplay area with our hands, the iPad version will let you use your iPhone or iPod Touch as a controller, leaving the screen wide open and allowing for some pretty cool two player local gaming. We need more companies to start doing this.

I’m not sure I’d recommend playing the game standard on the iPhone or iPod, simply because of the small screen space available to you. Soccer games are best played zoomed out so you can get a sense of the entire field at once to see the ebbs and flows of the game as you play. This leaves you squinting and trying to not only see your active player, but where the ball is. And because EA still insists on charging you separately for each version (stop it already!) you have to choose one or the other unless you want to pay twice. If you have the option, go iPad.

The manager mode is the meat and potatoes of the game, requiring you to not only play the games themselves but manage everything from office stuff like player transfers and salaries to the on-field stuff like formations and which players take which set pieces, like corner kicks and such. In between matches you can train players or get rid of them if need be, all to steer your team towards greatness. There’s so much to do in fact that, if you want, you can just simulate the games themselves if you’d rather focus entirely on the management stuff.

The games themselves play out very well, with players making pretty smart decsions about how to play their positions. AI controlled players make runs when they’re supposed to and collapse on attacking players intelligently. It plays very much like a soccer game would in real life.

The game is heavily dependent on European leagues, which makes sense since that’s what most people want to see and play as, but it’s nice to see the North American MLS league represented and with very current rosters as well. I get to play as my Philadelphia Union, and the team’s roster is accurate as of a few weeks ago. Players look nothing like their real life counterparts (outside of skin color), but it’s a nice start. The MLS getting some love is never a bad thing in my book. 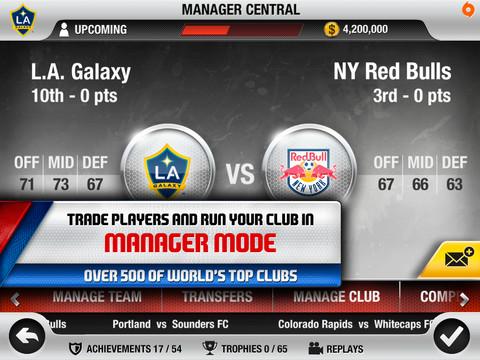 The presentation for the most part is very nice, though does run into a few hiccups. The players themselves look good, but the stadiums and backgrounds are just cardboard cut outs and pop in and out far too often. There was also more than a fair bit of clipping going on. But those issues serve to keep the frame rate steady, and it is steady, so I guess it’s for a good cause.

It’s nice to get to worry a bit less about the viability of a game that really belongs on a console, but finds itself on a touch screen too. Typically when I hear a game is coming out for Xbox 360, Playstation 3, iPhone, and iPad, I get a feeling from the outset that the touch screens aren’t the way to go. FIFA 12 goes a long way towards proving me wrong, providing a genuinely compelling gameplay experience and presentation that, while not up to the same standard as its console brethren, does a very good job regardless. FIFA 12 is a nice way to get your FIFA fix on the go.