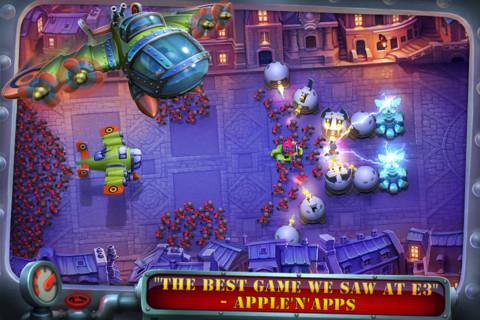 Some people argue that it isn’t enough for a sequel to do what made the original great. That in order to stand out, it has to veer of the beaten path and introduce new features, and in some cases, an entirely new play style. You know the ones. The people who who get their hands on a sequel on release day, play it for a little while, and immediately start complaining that it’s “just like the first one!”  These people haven’t played Fieldrunners 2.

Tied inexorably to the App Store itself, the original Fieldrunners is a title that made a name for itself when mobile culture was doing the same thing. At a time when titles like Grand Theft Auto IV and Rock Band 2 were capturing audiences everywhere, Fieldrunners broke the mold and found itself along these heavy hitters on Time Magazine’s list of 2008’s top 10 video games. With instantly loveable art, a true sense of strategic diversity, and constant updates since, Fieldrunners set a very high bar for tower defence on your phone…or anywhere else for that matter.

Enter Fieldrunners 2: a sequel with tons to prove, whose biggest strength is arguably that it doesn’t try too hard to prove anything at all. With deftness and confidence, Subatomic delivers a game that is resolute in its desire to simply do what the studio does best: create peerless tower defence play. The result? A near-perfect balance between puzzling, strategizing, trap-settting, fist-shaking, frustration, and most of all: satisfaction.

Make no mistake: Fieldrunners 2 does not let you gently into that good game. A complete antithesis to the mentality that says “pay for your towers, watch them work, tap to collect money, pay for more towers,” the title is here to remind you that tower defence is more than a buzz word for the genre. It’s about defending – and doing so with all the forethought, strategy, and might you can muster, because there’s an army of baddies who want your territory. This is a game where difficult settings mean something, and where even the lowest setting isn’t a free pass.

Arguably, however, the coup of Fieldrunners 2 is that of the best game experiences out there: it justifies everything. That is to say, Subatomic equips you with the starting purse, tower set, and slew of power-ups necessary to take down your enemies whether it’s the first level or blistering final stage, and it’s your job to play wisely. The worst game experience possible, I think, is one where you the developer sets expectations, but doesn’t equip you with the tools to meet them. Where victory depends on that perfect – and totally random – set of button presses needed to break through the overwhelming odds against you.

Here we have just the opposite: every single loss I suffered was one where I could point to poor decisions I made. Too many artillery towers and not enough slow-down glue guns. An unruly attempt to save up for the high-damage towers to the detriment of my early game. Even when the death was on wave 59 of 60. Especially when the death was on wave 59 of 60. Subatomic has created measurably smarter enemies this time around; ones who stray from the path your towers seem to be creating for them, which join others in waves that force you to explore all the game’s towers and craft labyrinths of power-hitters, tempo creators, and standard grunt shooters.

But far from simply asking you to be at your head against a wall, Fieldrunners 2 operates within a star-based ecosystem that feels truly rewarding. Playing levels on the lowest difficult nets you one star for a win, with the second and third stars coming from taking on the challenge of the harder settings. In turn, stars are necessary for unlocking more towers and – one of the few additions to the sequel – unique power-ups that have field wide effects like wave rewinding. Suddenly learning is not a matter of attrition, but reward. Going back and “grinding” comes with tangible rewards, and as you earn more content, you find yourself with an innate knowledge of how to use it better. Each level may be a marathon, but every victory improves your stamina. 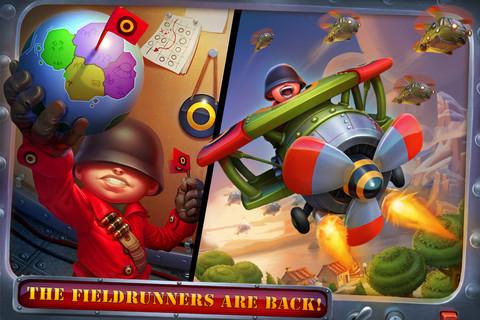 Part of me feels remiss in ditching the specifics here in favor of a treatise on the ethos of Fieldrunners 2. But most of me doesn’t at all. Things like the game’s staggering variety of levels (endless wave, time challenge, maze-making), total lack of in-app payments, massive scope, and sense of whimsy… you’ll experience all of that when you pick up the game. And if you have even the remotest interest in strategy or enjoying your life, you need to pick up this game. Fieldrunners 2 is an exercise in watching a master work, and understanding why better doesn’t always mean “entirely different.”