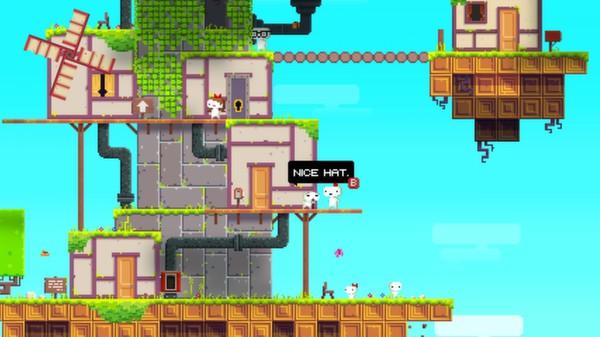 Sometimes a square is not just a square: in Fez, it’s a cube.

When Fez first launched on Xbox LIVE Arcade in April 2012, hope for a PC release was low.  Creator Phil Fish dubbed it a “console game” specifically, with an experience crafted by the way players ingest it.  While this caused some PC gamers to close the window on Fish and Fez permanently, those who have patiently awaited a change of mind have finally been rewarded with a Steam release.  Time may not heal the PC-spited’s wounds, but giving into the joyful charm of Fez just might.

Fez begins in a seemingly 2D world, populated by flat white creatures with rectangular heads.  Our hero, Gomez, is one such creature, called to the top of his village one day by the time-worn Elder, Geezer.  Geezer hands down to Gomez the power of the red fez, which allows him to see dimensions beyond the one he currently occupies, and to change perspective in order to visit these new dimensions.  Gomez’s world quickly expands from a single plane to a four-sided cube, with dimensions he never knew existed now able to be visited with a rotation of the world.

But just as Gomez is inheriting these powers, something goes wrong: the powerful hexahedron which grants him the fez is split into pieces and scattered throughout the land.  Gomez must use his new multi-dimensional knowledge to find the fragmented cube pieces and restore the hexahedron before black holes tear open the entirety of his planet.  Luckily, he’ll also receive help on his journey from Dot, a Navi-esque rainbow cube who accompanies Gomez and offers advice.

Gomez and Dot’s cube hunt takes the form of a puzzle-platforming adventure, in which Gomez’s perspective-swapping ability takes center stage.  The simplest puzzles involve merely changing perspective to find a cube hidden directly behind you in the still visibly-2D world.  More often, cubes and other hidden items—treasure chests, keys, ancient artifacts, and more—must be uncovered through a combination of perspective rotation, platforming, and environment interaction.  Platforms that are too far for Gomez’s jump span can be brought closer through a change of perspective; ladders that were once broken become whole; and objects used to solve puzzles become visible.  These objects range from bombs used to clear blocked paths and buttons that must be held down by heavy crates, to nearly-invisible platforms and crankable elevators made up of nuts and bolts.

The amount of puzzle variation in Fez is staggering, and uncovering each puzzle along with its eventual solution is one of the game’s greatest joys.  The challenges mentioned above fall under the basic puzzle category—while they often contain significant difficulty for completion, they are also self-contained and can be solved upon discovery.  There are other, more obscure puzzles scattered throughout the game which require a specific in-game time of day or decryption of numerous ciphers to even begin their unraveling.  While these puzzles border on obtuse, they are not required for collecting the 32 cubes needed to complete the main game, ultimately providing an advanced challenge for subsequent replays. 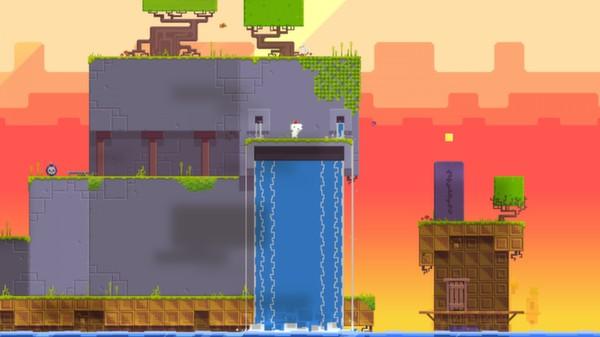 Even while pursuing the advanced decryption puzzles, though, Fez remains a soothing and laidback game focused on exploration and the surprising results of changing Gomez’s perspective.  There is no timer on completion, no attacking enemies, no death in any threatening sense of the word.  Since the world Gomez inhabits is made up of vertical stages floating in the sky, he can fall to his (temporary) demise from too high a height or into the emptiness below, but will immediately reset on his last solid foothold.  Puzzles cannot be failed, merely unsolved, and even the black holes that begin to invade different areas of space as the story advances will merely capture and release Gomez to his previous location.

This freedom from danger encourages adventuring through the entirety of the world, exploring every nook and cranny and taking time to soak in its nuances.  Charming features, like square constellations in the night sky or the at-first-indecipherable messages scrawled on signs and walls are easy to miss at first glance amidst the beautiful, colorful environments that are bursting with detail.

Unfortunately, for a game so invested in exploration, its map leaves something to be desired.  Each separate room or stage in Fez is accessed via a door from an adjacent stage, with most stages containing multiple doors.  Deciphering which door leads where is nearly impossible via the map, and you’ll often be left checking multiple doorways to find your way around the branching paths. While the map does let you know if any cubes or other secrets remain to be discovered in a specific stage, it does little to assist you in reaching these destinations.  The same is true for the game’s warp system: while each of the primary stages contains a central hub with a warp platform, there are only four warp destinations, resulting in an excessive amount of backtracking to collect items or solve puzzles you previously passed up, and actually discouraging exploration in any stages you have not yet completed. 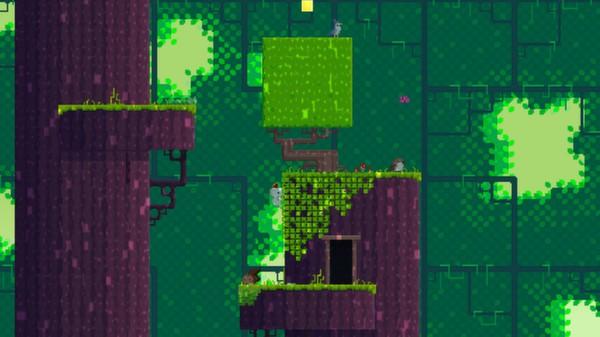 A similar problem can be found with the useful, but not-quite-useful-enough helper cube, Dot.  While Dot is eager to share info with you on how to throw bombs and totems that have the power to prevent perspective swaps, she is eerily silent on puzzles that you may be unequipped to handle.  When I found myself on a tree island with only one area of interaction—a pool of water that made noise upon entering—I proceeded to jump, swim, and perspective swap that area until exhausted.  Finally, it was the internet—not Dot—who clarified I needed to solve other puzzles first before returning to that one.  With many obscure and potentially prior-solution-dependent puzzles scattered about Fez, it would be nice for Dot to casually hint, “Maybe we should come back to this later?”

Thankfully, these issues barely disrupt the primary experience of Fez: its sense of discovery and wonder, accomplishment and growth.  Each area of Gomez’s world, from his breezy village to the dark and stormy cemetery is a joy to uncover and explore, with their own characteristics and challenges.  The puzzles, from the simplest to the most vague are all stimulating, rewarding, and truly fun to figure out.  This is due to the seamlessly integrated nature of the puzzles, their stages’ brilliant design, and Gomez’s fluid movements across them.  The look of undiluted happiness on his rectangular 2D face when you find a cube is also a strong motivator.  I had a similar look on my own while playing Fez.