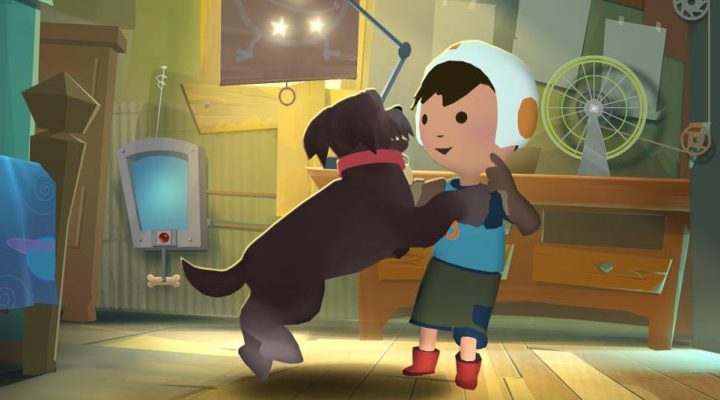 Gorgeous visuals and highly detailed backgrounds. The story is great, but the way in which it's told is even better. The puzzles are designed very well, and the difficulty curve is nearly perfect.

The frequency of the mini-games obstructs the pacing at times. Not all of said mini-games are fun.

Are games art? Am I pretentious for asking that question? The answer, on both accounts, is yes. And while I’d much rather avoid the topic altogether, it can’t really be helped with Fetch, a point-and-click adventure from Big Fish Games. It’s currently part of a featured exhibit at the Museum of History and Industry (MOHAI), where people can get a glimpse into its development cycle and other behind-the-scenes goodness. Take that, Roger Ebert!

A spot in a museum isn’t a one-way ticket to Good Gameville, however. That also requires solid gameplay and, in some cases, a captivating story. Fetch just so happens to have both of these things in spades. It also features a lot of dogs, which means it’s probably the best game ever.

But don’t start “aww”-ing just yet, dog lovers. Fetch tells the sad story of a young boy who loses his dog, Bear, to an evil company known as Embark Industries (I’m assuming that pun is intended).  Embark markets itself as a pro-dog institution, but only to cloak its true intentions: stealing dogs left and right. There’s a reason behind the company’s actions – and it’s actually pretty cute – but I’d rather not spoil it for you. Suffice to say, your dog has been kidnapped and you want it back.

In typical point-and-click fashion, you’ll be tasked with solving a variety of puzzles in order to progress; some of them require items you discover in the environment, and others demand nothing more than your wits. These puzzles are easily one of Fetch‘s strongest aspects. They’re not obtuse in the same way as many other point-and-click adventure games, but they aren’t a cakewalk, either. 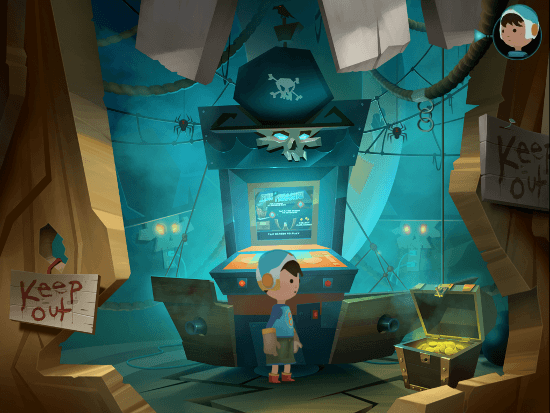 And on the subject of pointing and clicking, Fetch is bursting at the seams with interactive background elements. Nearly every section of the game has at least a couple of things worth tapping on to see their reaction. I mean, who doesn’t love tapping on a skull and hearing it chatter?

And when you’re not tapping things or solving puzzles, chances are you’re playing a mini-game of some sort. Fetch is full of them, and playing them is a necessary part of progressing in the game. Some of them borrow a little too much from classic arcade games and feel more clichéd than fun, but most of them are entertaining. My absolute favorite of the lot was the one that took place within the in-game version of MOHAI (totally meta, I know), where you fire away at various enemies and items while learning about different periods of human history. It was educational and violent! 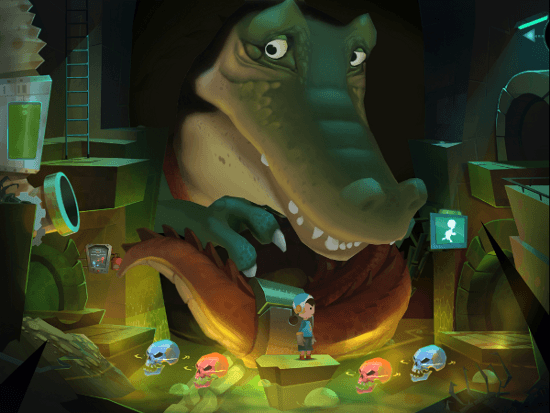 Given the game’s presence in MOHAI (and MOHAI’s presence in the game), I would be remiss not to discuss its visuals. I debated for a while about the best way to describe them, but I finally decided that classic animation with a modern flare worked best. This is because Fetch features lush, 2D backgrounds, as well as 3D, polygonal characters. You’d think these two styles would be at war with each other, but they actually work in tandem quite wonderfully. There’s nothing quite like a giant 3D alligator popping out from the depths of a seemingly 2D (and oddly beautiful) sewer.

Fetch is a game that oozes personality, thanks in no small part to its gorgeous visuals, lively world, and less-is-more approach to storytelling. If you’ve been in search of a solid point-and-click adventure game —and you’re not a dyed in the wool cat person—you won’t regret picking this one up.