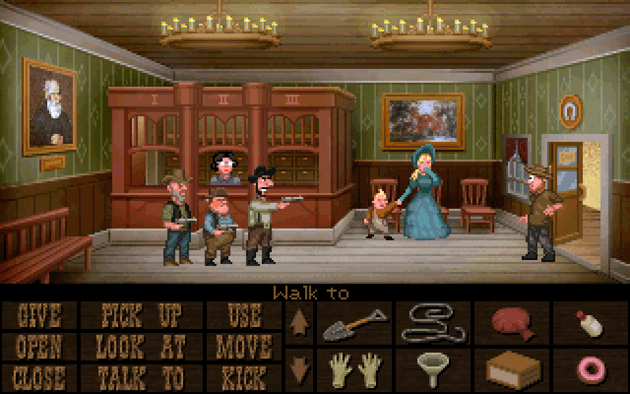 The story of a man, a mule, and a Monkey Island…I mean, some gold.

Although point-and-click adventure games seem to be making a comeback recently, with stellar entries like the Deponia series and The Silent Age combining modern aesthetics with classic gameplay, we have yet to hit upon another Renaissance of the genre.  Fester Mudd: Curse of the Gold recognizes this with its opening directive and acknowledgement: “This game is a tribute to the golden era of adventure gaming,” which is hardly a reference to 2013.

In this instance, the golden era of adventure gaming is specifically the LucasArts era; Fester Mudd openly replicates early ’90s LucasArts adventures.  From its deliberately pixelated graphics (complete with exaggerated eyeball movement) to the action interface and large icon inventory system, Fester Mudd is designed like a new Secret of Monkey Island set in the Wild West.

This inspiration carries over to its lighthearted plot and puzzles, as well.  The story begins when our overly confident, eponymous hero receives a letter from his brother Bud claiming to have struck gold in a nearby town.  Fester saddles his trusty mule, Martha, and rides off towards the town of Loamsmouth, eager to find Bud and get rich quick.  Upon arriving, though, he runs into two major progress stoppers that must be resolved—getting into the tavern where he is supposed to meet Bud, which requires a valid ID, and then hiring an experienced gunman, who has a list of demands that must be met.

Both of these stoppers are your overarching goals in Episode One and will be resolved through the usual series of character interactions, item collection, and puzzle solving that comprise classic point-and-click adventure gameplay.  Puzzles range from finding a replacement nose for a gun shop-owning clown to evicting an overly aggressive squirrel from his tree hole home.  In equally classic fashion, there is no hint system, although Fester is quick to provide useful observations upon looking at the world around you, or whenever you almost reach a solution.  Completely unrelated items will merely result in a “Huh?” response, but using the right item on the wrong part of an object, or a partial solution (such as two-thirds of the clown’s nose) will earn a helpful directive from Fester.

These pseudo-hints come in handy, but are much less necessary here than in other adventure games.  Most of Fester Mudd‘s puzzle solutions are relatively straightforward, even logical.  While they still require using items you picked up long ago and might have forgotten exist, a quick scan of your inventory will usually be enough to figure out what needs to be done.  This is due to both the rational nature of the puzzles—for example, a knife you have is used for multiple instances of cutting, imagine that—as well as the visual depiction of the items themselves.  The object that will eventually be turned into the clown’s nose is spherical and looks like the basis for exactly that.  As someone who is admittedly terrible at P&C adventures (despite enjoying them) and quickly turns to guides the moment a puzzle has me stumped, I made it through the entirety of Episode One without any help besides Fester himself. 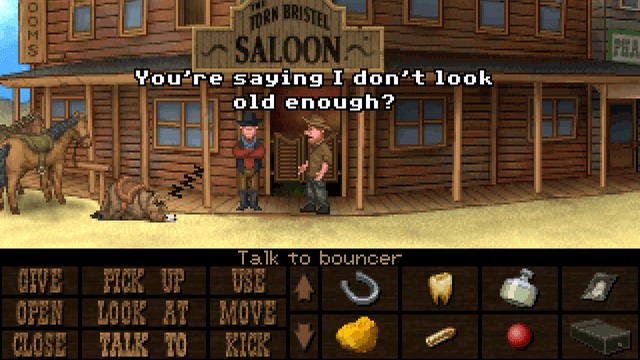 While “logical puzzles” should usually be classified as a pro for the sake of avoiding frustration, their prominence in Fester Mudd does reduce much of the charm and randomness that is so inherent in the genre.  The “rubber chicken with a pulley in the middle” of Monkey Island may be totally confusing upon first encounter, but it’s also hilariously memorable.  As a game specifically channeling the LucasArts style of adventure, Fester Mudd feels too normal at times, save a few encounters with farting fish.  This also holds true for the characters you’ll interact with in Loamsmouth; while they are not un-charming, most simply don’t stick with you beyond the conversation at hand.  While I still vividly remember the quirky inhabitants of Chaos on Deponia nearly six months later, many of Fester’s interactions have already begun to fade away merely hours after turning off the game.

The simpler puzzles, forgettable characters, and abridged length (just under two hours, and that’s for someone who takes time to look at, talk to, and kick everything in sight) all combine to create a game that definitely feels like an introduction to what will hopefully become something much bigger.  Although this is only Episode One of what will be a three-part series, the next two episodes will need to create a more memorable and unique world in order to keep players immersed.  Otherwise Fester Mudd will be a technically sound, beautiful throwback to ’90s adventure games, but not a classic itself.