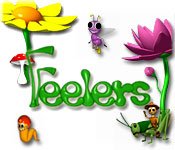 By all rights, Feelers should have been one incredibly forgettable game. It is, after all, just a 2-D shooting gallery with a name that’s … what’s it called again? But — and you’ve got to trust me on this one — the folks at Alawar have hatched a shooter that’s so much fun that, well, let’s just say that I’ve battled my way through to level 37 with just two more to go. ‘Nuff said?

While Alawar swears that no bugs were harmed during the making of Feelers, that’s hard to believe. After all, the entire game is all about blasting the bad bugs to bitsies. But there’s no reason to shy away from this so-called violence-it’s about as explicit as a Roadrunner cartoon (though parents should note this if they play the game with their children). There’s good reason to want to do some exterminating; you see, your egg-laying queens have been kidnapped and, unless you protect the eggs from the evil insects, no new queens will hatch to replenish the missing ones. The future of the whole colony is in your hands, and you’d better be a straight-shooter if you intend to save the insect world as we know it.

All the action takes place down on the ground among the huge blades of grass, colorful flowers, and mushrooms. Each level begins with a specific number of eggs to protect, a countdown timer set to indicate how much time you have left, and an ever-growing assortment of targets and weapons. You may start off with just a single gun to use on a single ant, but it’s not long before you’ll make good use of the heat-seeking missiles, exploding ice grenades, and nuclear weapons, to name just a few. That’s because that single ant has lots of pals–14 of them to be exact–from egg-munching beetles, to bug paratroopers and worms that enjoy butting the eggs with their football helmets. The insect armies may look adorable, but don’t let those critters fool you. You’ll soon learn to love the little squeaks they emit when you’ve turned them into bug dust. Much of the strategy is deciding when and where to use what weapons… and which to keep for when the going gets tough–as it will as the levels progress.

Speaking of level progression, 39 may seem like a lot, but when you really get into Feelers— as you will–you’ll be wishing the game were longer than it is. Or that it had more than one difficulty setting so that you’d have the opportunity to replay the game with more intensity.

While the goals may become more difficult, gameplay itself couldn’t be simpler. Move your mouse to take aim at a target and click on the left mouse button to shoot. You’ll need to scroll left and right a bit because the playing field is larger than your monitor, but that just adds to the challenge.

Feelers is missing a tutorial but none is needed. At first, “hint windows” pop up to remind you that you need to click on new weapons to access or detonate them and that you really shouldn’t shoot any of the infrequent friendly bugs (like the warrior ant) that assist you in battle.

Scoring is based on how many targets you hit, your percentage of accuracy, the number of eggs remaining at the end of a level, and, if you’re good, the medals you won for impressive marksmanship. But when it comes down to it, you may find–as I did–that points aren’t all that important. It’s all about jiving to the jaunty soundtrack, making it through to the next level, and, of course, saving that last egg. As they say in France, even one egg is “an oeuf!”