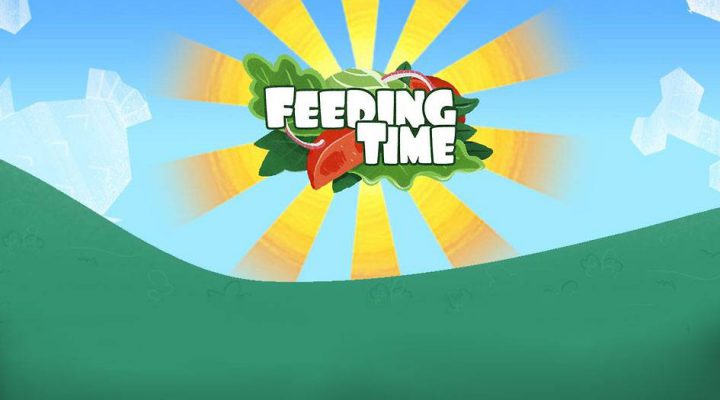 Anyone that lives in an urban area knows animals will eat some pretty sad stuff. That’s why cities with public composting programs distribute locking bins that are practically fit to hold depleted uranium.

But even though the family dog will eat French fries that the baby stuffed down his diaper, it doesn’t mean he should. Animals deserve to eat well, and the protagonist of Feeding Time needs your help to make sure critters around the world are getting proper meals.

Feeding Time is a unique matching / puzzle title from Incubator Games. Though the action is tile-based and resembles a match-three at first glance, Feeding Time is its own animal, so to speak. Each stage is strewn with delicious foods, and is bordered by animal heads (not as grisly as it sounds). 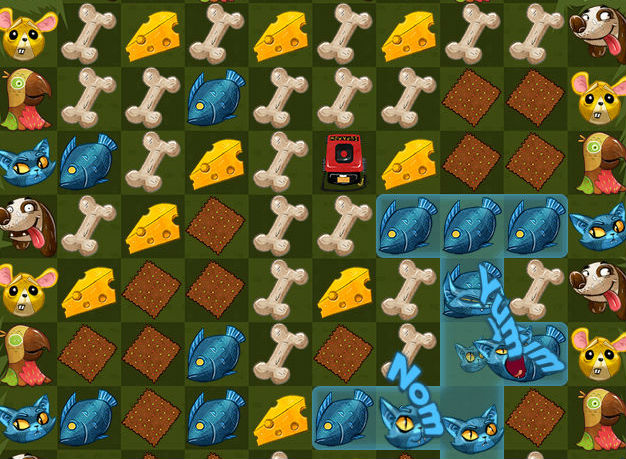 When you tap an animal, it begins to munch, provided it’s adjacent to its favorite food. The rabbits eat carrots. The dogs eat bones. The mice eat cheese. And the cats get very irate if you suggest they eat anything but fish. Ideally, you want to start a chain of nomming that piles on the points. You have a little over a minute to rack up as high a score as possible.

Feeding Time is extremely simple to learn and play, but obtaining a score worth bragging about takes some practice and observation. As the animals eat, game pieces shift around the board. There needs to be an unbroken chain of food in order for an animal’s score multiplier to stack, so if you’re not careful, a beast’s impending feast can turn into a bust.

Fortunately, you can earn badges and use power-ups to help the animals fill their tummies. Depending on the badge you have equipped, you can  get hints about the most productive moves, initiate all remaining power-ups even after the round has ended, or place more power-ups on the board. Power-ups include bombs that clear the board of one food item (which subsequently stuffs it into the relevant animals’ maws), a lawnmower that creates an uninterrupted string of one particular food, and more.

Feeding Time is, in a word, adorable. Here it is in two words: Adorable and addictive. Even though it introduces a new concept, it’s a game that makes sure all its parts are well-polished and fitted together snugly. It’s fun to watch the animals scarf their way to a high score, and when you tap a bunch of animals in succession, the board becomes a feeding frenzy – and a joyful jangle of animal sounds.

Even the animal icons exude personalities. If, for instance, you suggest that a dog eat a carrot, it politely (almost guiltily) requests a bone. If you try and make a cat eat cheese, it demands “a feast of fish.”

If a complaint can be levelled at Feeding Time, it’d be that unlocking new stages takes a long time, and a lot of games. There’s no free to play-style energy system to contend with, however, so you can put in plenty of games. The replay button even challenges you to “one more game.” Spoiler: You’re probably not going to turn it down.