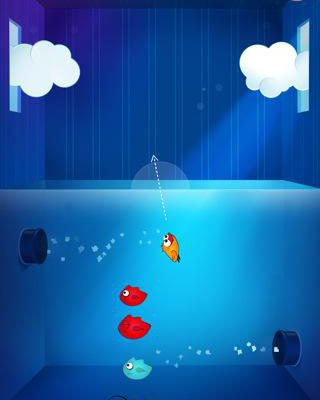 Even the most prevalent of casual gamers would admit a large portion of their success comes down to pure luck. Games like Angry Birds and Cut the Rope have ‘random’ at their very heart. This doesn’t detract from those who have the skill to come out on top, but it does mean said games are finely tuned to accommodate the odd lucky shot that unexpectedly earns the most amateur of players the odd top billing. On the surface, Feed the Duck feels like it should be just as random as its iPhone bedfellows. But, owing to a rather ill-fitting rigid approach, play is far too tight to allow any sense of fortune to flourish.

Given Feed the Duck‘s somewhat light-hearted setting, that’s an especially sombre way of introducing its set up. Indeed, in some respects, Feed the Duck appears endearingly simple: like the aforementioned Angry Birds, this is a physics based puzzler where aiming is everything. Instead of pulling back chicks to take down a pack of pigs, however, the goal is to shoot a duck into the depths of the water below, scooping up his dinner as he goes.

The actual act of setting him off on his way will be familiar to fans of Rovio’s monster. Pulling him back with your finger, the pace of your duck’s dive is determined by how far you drag your pinky back, while the angle of his descent is laid out on screen via a handy dotted line.

What makes Feed the Duck challenging, however, is that rather than aiming straight down, you first have to flip your quack skywards, shooting him up into the air before plunging into the water. As such, this means there’s a crucial delay between releasing your finger from the screen and your duck snapping up his supper – a factor that, even in the early stages, takes some getting used to. It becomes even more acute when your main foe – a particularly portly fish that electrocutes you on contact – comes into play, patrolling the waters and, more often than not, making your route to refreshment harder than it might first appear.

But, while the levels increasingly become more and more complex (buttons, switches, magnets and scores of other elements combining to turn Feed the Duck into a series of mazes), the problems with its approach are there from the outset.

Essentially, judging how your duck is going to react underwater without such elements is unpredictable enough. For example, the even the addition of simple features such as platforms in the middle of the water can prove incredibly frustrating, as your feathered friend bounces off them in all manner of directions.

This results in a series of stages that appear easy from the outset but are especially fiddly in play, with one or two fish out of reach because you’re not privy to the developer’s blueprint. The fact Feed the Duck knocks 250 points off your score for each failed effort is no sweetener either: it’s perfectly possible to complete stage after stage scoring zero points in the process. 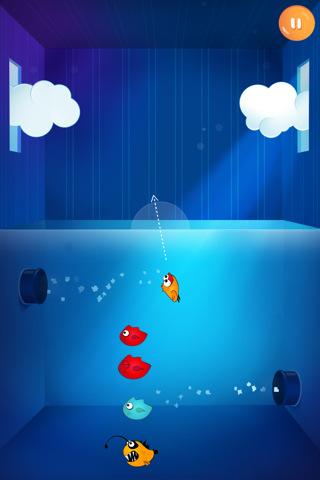 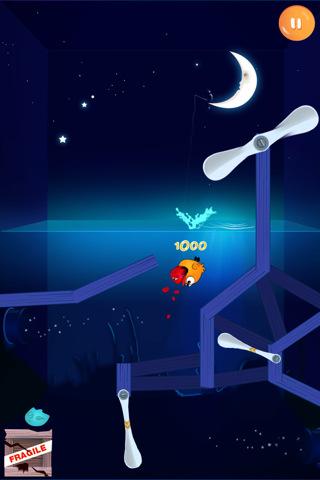 Such problems arise because Feed the Duck‘s levels have a narrow field of vision: there’s basically one or two shots that win the day, and any experimentation proves fruitless. By the same token, it means the kind of luck so crucial to releases in this vein is sorely missing, meaning you either play by the developer’s rules, or you don’t play at all.

In the end, Feed the Duck feels like a deception – a physics puzzler that appears simple enough to engage with from the outside, but will leave scores disappointed when they take to its waters. The idea behind it, though a touch derivative, has potential aplenty – but developer Cezary Rajkowski’s strict rule set means Feed the Duck‘s fishing trip only turns tasty when you follow its line to the letter.