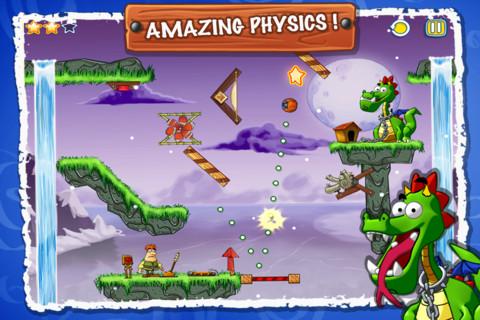 The game is all about preparation. The premise of Feed That Dragon is that your character must sling food to his pet dragon, and along the way you’ll have teleporters, fans, and different variations of boards that will allow you to get the food to him. For the highest score, you must collect all three stars that are placed throughout the level. Most of the puzzles are simply trying to figure out the proper angles on the boards to get the food to interact in such a way that the food will reach your surprisingly cute dragon friend.

That puzzles set-up is fine, and had it been properly explained, would be tremendously better for it. For example, at the start of the puzzle you only get a small arrow pointing in the general direction of where the food will be going. Why not give players a dotted path on the flight of the food? Instead, players will be forced to launch the food into the air just to get a complete sense of its trajectory, leading to a tremendous amount of trial and error gameplay. Even worse, some of the boards have to be placed just right for the solution to come to fruition. 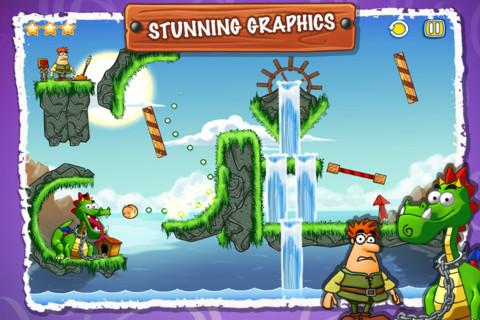 The game does have a built in system where you can view the solution to the puzzle, which is nice, but also puts the game’s flaws on stark display. In one case I had the basic idea down for a puzzle, but I did not have one of my boards placed exactly where it needed to be. Had I moved my board down slightly from the position I had it in, I would have successfully passed the course with three stars. This type of precision should not be asked for—especially considering the game offers no feedback that would allow for players to actually have any precision.

Another example; there are teleporters that transfer the food from one to the other. It does not matter how the food enters the portal—it comes out the same way each time. If this is the case, couldn’t you show players how the food will exit, instead of forcing them to throw the food into the teleporter and simply see for themselves? The satisfaction of completing a level on your first try is simply robbed from players.

While the game has a very respectable amount of content included, the underlying game is simply not good enough to justify dropping cash on. You’ll get some neat puzzles, but you’ll have to work for the solutions—not because you do not understand what needs to be done, but rather you aren’t given enough feedback from the game to properly complete the levels with any sort of accuracy. The premise is fine, but the execution is flawed.