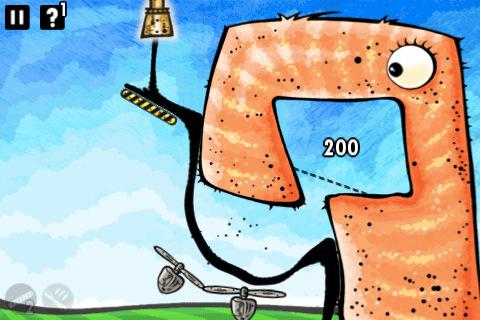 Feed Me Oil is kind of a weird title. On one hand, it’s a goofy, fun little game that’s got a lot of charm. On the other, a game about cleaning up an oil spill only a year after the Deepwater Horizon disaster seems like it borders on poor taste. Don’t get me wrong, it’s certainly enjoyable, but it’s just a little weird to play through this kind of scenario.

The premise here is pretty basic: the “big oil pipe” has burst, which means oil is going everywhere and poisoning the world. As a result, players need to redirect the flow into the mouths of what appear to be giant creatures that are part of the planet’s landscape. It doesn’t really make a lot of sense, but it’s weird, quirky, and a little charming.

This is a puzzle game, much like Enigmo, which requires players to redirect a liquid flow into a specific area. In order to accomplish this goal, players are given different types of devices in each level to move the oil. These devices include platforms, giant fans, magnets, and wind patterns; aside from being able to place these anywhere on the map, players can also rotate them in any direction.

The gameplay is both fun and challenging. It’s pretty easy to get the oil to pour into each level’s designated area if you use all the different tools that are available, but this doesn’t usually earn the maximum amount of stars (instead, using fewer resources more creatively results in top marks). Beating levels is pretty easy, but beating them well can turn out to be a massive challenge.

If you wind up stuck though, there’s a hint system that you can use to show where tools can be placed in order to solve the current puzzle. Granted, this is the solution that will use every item in the inventory which means that it won’t give players top marks, but it will allow them to progress to the next level. 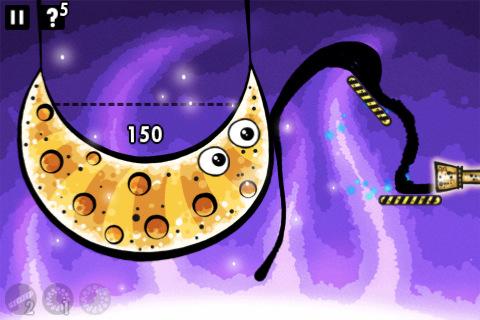 But there’s a problem with the hint system. Initially, players can access them quickly and easily, but after the game’s first world is finished players need to wait a certain amount of time between hints. If players want to keep on instantly accessing hints, they need to pay an additional $0.99 in order to unlock the option. If Feed Me Oil were a free title, this would probably be something that most people would put up with, but it’s pretty frustrating that the developer and publisher would try to squeeze more money out of players when they’ve already had to pay to buy the game.

It should also be noted that the game’s production values are pretty stellar, featuring a unique, strange visual style. The creatures that players have to feed feature some pretty bizarre designs, offering a style that will look rather familiar to anyone who grew up watching the Ren & Stimpy cartoons in the 1990s.

Feed Me Oil is a success thanks to the fun and challenge it provides. Not only that, but the game features a ton of content to play through, too. So long as you can get past the setting and either swallow or ignore the cost for the instant hints, there’s a lot here to love.