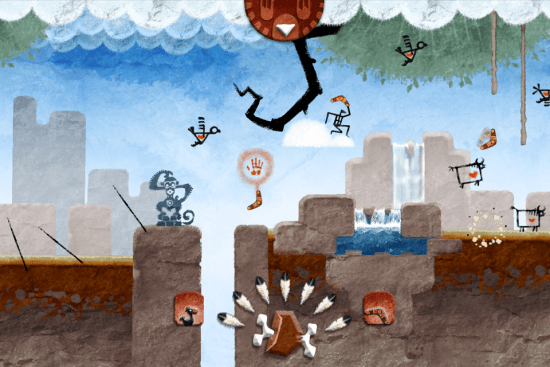 Despite its problems, Feast or Famine is a feast of fun.

Those of us who are blessed with a steady income typically don’t think too hard about where our food comes from. Our sustenance is everywhere, and the biggest fight we endure to acquire it usually involves getting to McDonalds before they stop serving breakfast. Feast or Famine for iOS recalls a time when our ancestors burned all their calories just trying to secure their next meal. Go on: Run through the grass, listen to the thunder of hooves, and feel the primal thrill of the hunt—without getting off your couch of course, because man, who needs that noise when the hockey game is on.

You play through Feast or Famine as Glyph, a sticklike hunter who may look familiar if you’ve ever taken a good look at some ancient cave paintings. Glyph must hunt for himself and his village, but the bison and fowl he stalks aren’t going to just give themselves up as entrees. Glyph needs to bring them down the old-fashioned way, and that means tons of running.

Feast or Famine is essentially an endless running game, but it has some clever twists that set it apart in a very busy genre. As Glyph runs, he encounters lots of dangerous and delicious animals that can be speared or bludgeoned with rocks or boomerangs (psst—under the right circumstances, they can also be sizzled with ray guns). When Glyph takes down one of these animals, it refills his “meat meter,” which otherwise depletes constantly through a level. If Glyph reaches the end of a level before the meter runs out and he starves, he’s declared a survivor—at least for another day.

But hunting is hard work. Glyph can only throw his weapon a limited number of times, but he can recharge it by waiting or by picking up a refill. Even if he manages to conserve his ammo, there are still tons of traps that will slow him down (thus letting his quarry get away), or in the case of the game’s numerous tar pits, kill him outright.

Feast or Famine is powered by an amusing and original concept, and the game’s presentation is stellar. Glyph and his prey all look like they leapt straight off the walls of some archeological ruin, and the pounding tribal soundtrack is a great accompaniment to your hunts. This is a game that’s worthy of a good set of headphones.

Unfortunately, there are still points where Feast or Famine trips and falls on its own spear. You tap on the left side of the screen to throw your weapon, and the projection is determined by the height of your tap. Since the XY axis is reversed (and version 1.0 of the game offers no way to change things up), tapping on the lower half of the screen results in a high shot, and tapping high results in Glyph firing low. It can be difficult to get a feel for where your weapon will end up, though things get significantly easier when you secure the boomerang. You can also hold onto a tap to freeze time and adjust your shot, though you expend more energy if you fail. 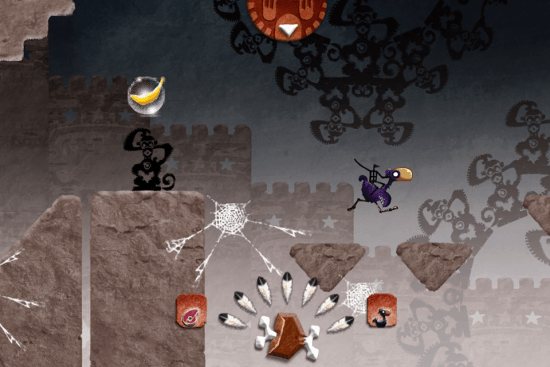 And while Feast or Famine‘s visual style is a lot of fun to behold, Glyph’s black outline, as well as the outlines of the animals he pursues, has a way of blending in with the game’s grey-and-brown backgrounds. It can be hard to see where you’re going at times, which becomes a big problem when you’re surrounded by tar pits and angry boars. Death means going back to the start of a level, and sitting through each level’s load times over and over is bound to make you as mad as a hungry Neanderthal.

Feast or Famine limps along at times, but as a whole, it deserves a spot near the top of the endless runner food chain. Grab it, hunt down a Big Mac, and play.