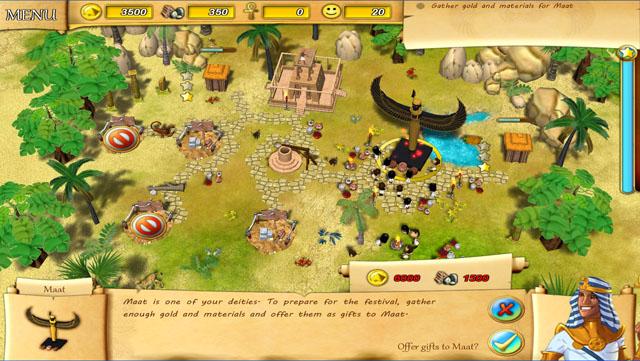 Fate of the Pharaoh is a light, fun exercise in casual city-building.

City-building exploded into one of the top genres on Facebook, so it’s not surprising to see it also blossoming in the more traditional world of casual gaming. Fate of the Pharaoh is a take on city-building that’s designed around tactics rather than strategy, asking you to develop a variety of settlements along the river Nile that meet specific goals. Some cities need to be happy while others need to produce tons of gold or materials for export. While developing the settlements isn’t difficult by itself, doing it before the level’s “Time of Ra” runs out grows very challenging as the game progresses.

Once you have your task for a given level, you’ll usually begin by searching around for clear building sites. If the level’s map doesn’t provide one already, you’ll usually want to construct a Well and a Quarry. Once you build housing for your people, you’ll need to keep it supplied with water from the Well or the houses will stop producing taxes. By collecting taxes you amass gold, which you may need to clear a level or simply to construct more buildings. By spending gold at your Quarry you can purchase new building materials, which you need to construct many types of buildings and sometimes to clear levels.

Beating levels within the allotted time is usually a matter of making the wisest investment decisions available to you. Buildings can be upgraded, so sometimes it’s better to upgrade a low-quality house that you happen to start a level with (like a Tent) rather than spending a longer time to construct a better-quality type of house (like a Cottage). By upgrading your Quarry, you can buy materials for lower costs, but it requires quite a bit of gold up front to do so. Buildings sometimes take damage and need to be repaired during levels, too, which can slow down a strategy that might otherwise be close to victory. 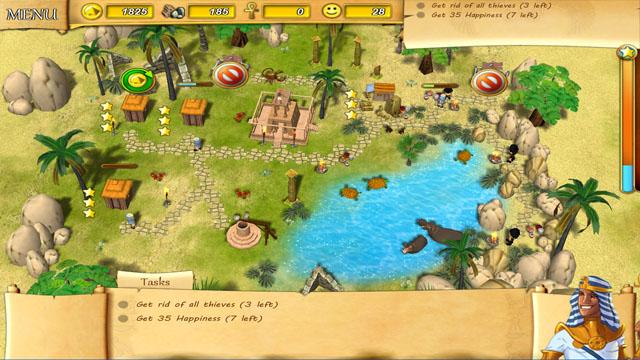 Fate of the Pharaoh does tell a little story, which begins with grim kingdom-destroying warfare and progresses into light shenanigans with space aliens and pyramid-building. New buildings are generally unlocked when it’s story-appropriate, rather than through player activity. For the most part this works out, though some buildings like the Market are difficult to use effectively. Others, like Houses, crop up at a point in the story that feels basically random. Breaking up the types of new buildings you get does helps a little when it comes to repetition, since the game’s level goals seem to become variations on a theme after awhile.

Still, the worst that can be said about Fate of the Pharaoh is that it gets a little repetitive if played in long sessions. Overall, the game seems to be designed for coffee break play, since each level can be finished quickly. Much of the game’s challenge comes down to figuring out how to finish a level within its allotted time. Fans of city-building games of any sort should probably take a look at Fate of the Pharaoh, which serves up very solid gameplay and an amusingly whimsical story.