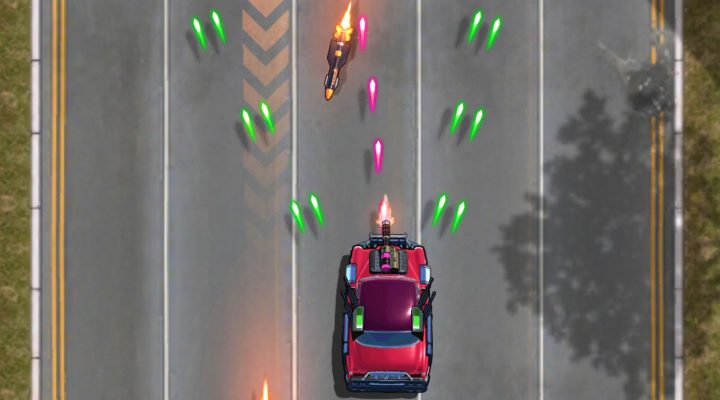 Cool but simple driving and shooting action reminiscent of an arcade classic.

Fun appearances by YouTube stars that don't feel tacked on.

Some ideas for mobile games are smack yourself in the forehead obvious. Others are less so but still strike you as really freaking cool once you try them out. Fastlane is one of those, a one-touch endless vehicular combat game that plays like a gonzo Spy Hunter tribute but has even more going on to boot.

Space Ape Games, best known for build and battle titles like Transformers: Earth Wars, is spreading its wings a bit here, and that’s a good thing. The core game mechanic is a simple one, as you simply hold down on the screen to make your car go and drag it side to side to switch lanes. Your guns fire automatically, so your job is to make sure you’re avoiding roadblocks, rockets and other incoming obstacles and surviving as long as possible.

While your car starts off with a very Spy Hunter-esque machine gun, you can upgrade it with extra barrels and diagonal-shooting guns plus extra armor to allow you to take more hits. Many destroyed enemies drop power-ups of various kinds, and UAVs (otherwise known as drones) are available to vastly upgrade your firepower, albeit for a limited time. In fact one of the joys of this game is simply admiring all the destruction you can spread across the screen at one time. 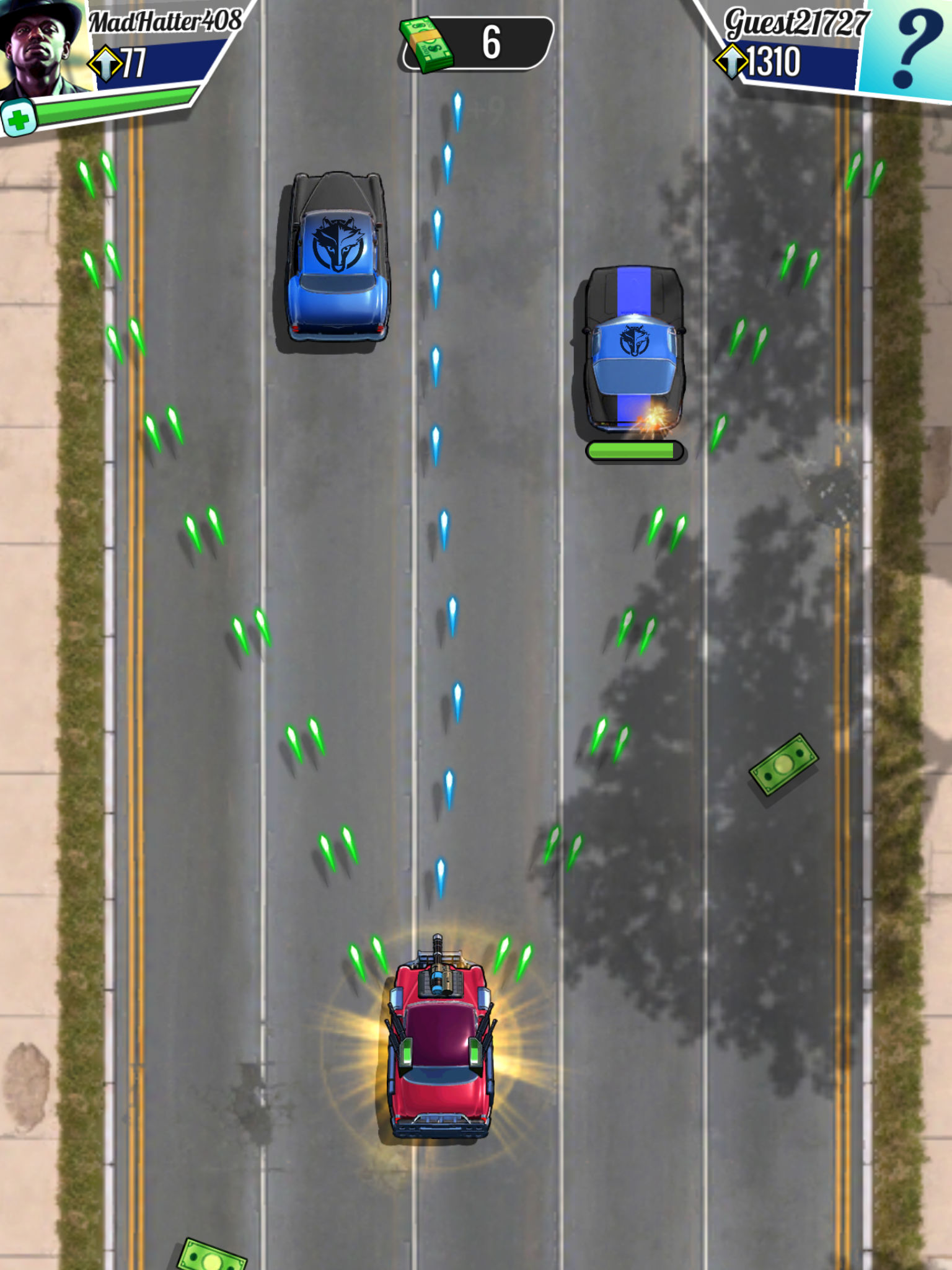 Despite all your toys, there’s plenty of challenge to be had. The road speeds up the longer you stay alive, and several things flying at you lead to one-shot death. Your primary objective is to rack up a high enough score by surviving and blowing stuff up to force the boss of each level to show themselves — Fastlane does have a story that involves you cleaning up a city section by section to reclaim your past glory — but there are often secondary goals to shoot for in exchange for experience and in-game currency.

While there’s a fun soundtrack to rock out to while you’re out on the road, one of the game’s cooler features is Apple Music integration. You can switch to that service with just a few taps, so if you prefer to listen to “Raspberry Beret” by Prince, a.k.a. the greatest song of all time, while gunning your way to the top, that’s an option.

Space Ape also secured the participation of a number of YouTube personalities, who enter the fray once you reach level 22 (and that doesn’t take as long as you might think). The likes of Jelly, Slogoman, JoblessGamer and Epic Voice Guy show up with humorous bits of dialogue that introduce weekly events and provide additional goals during gameplay. It could easily be a cynical ploy to attract teen and young adult gamers if done wrong, but it blends in well with the tone and feel of everything else going on here.

Only a couple of things hold the game back from true arcade-style perfection. One is the energy system, which is on the restrictive side. This is a game built for quick play sessions, but they can sometimes be over in a blink. The other is advancement, because while the game is generous in terms of ways to level up, the reputation goals for new levels are so high that they essentially can’t be beaten except by unlocking new cars, which can only be done by leveling up and spending decent amounts of gems, the premium currency. 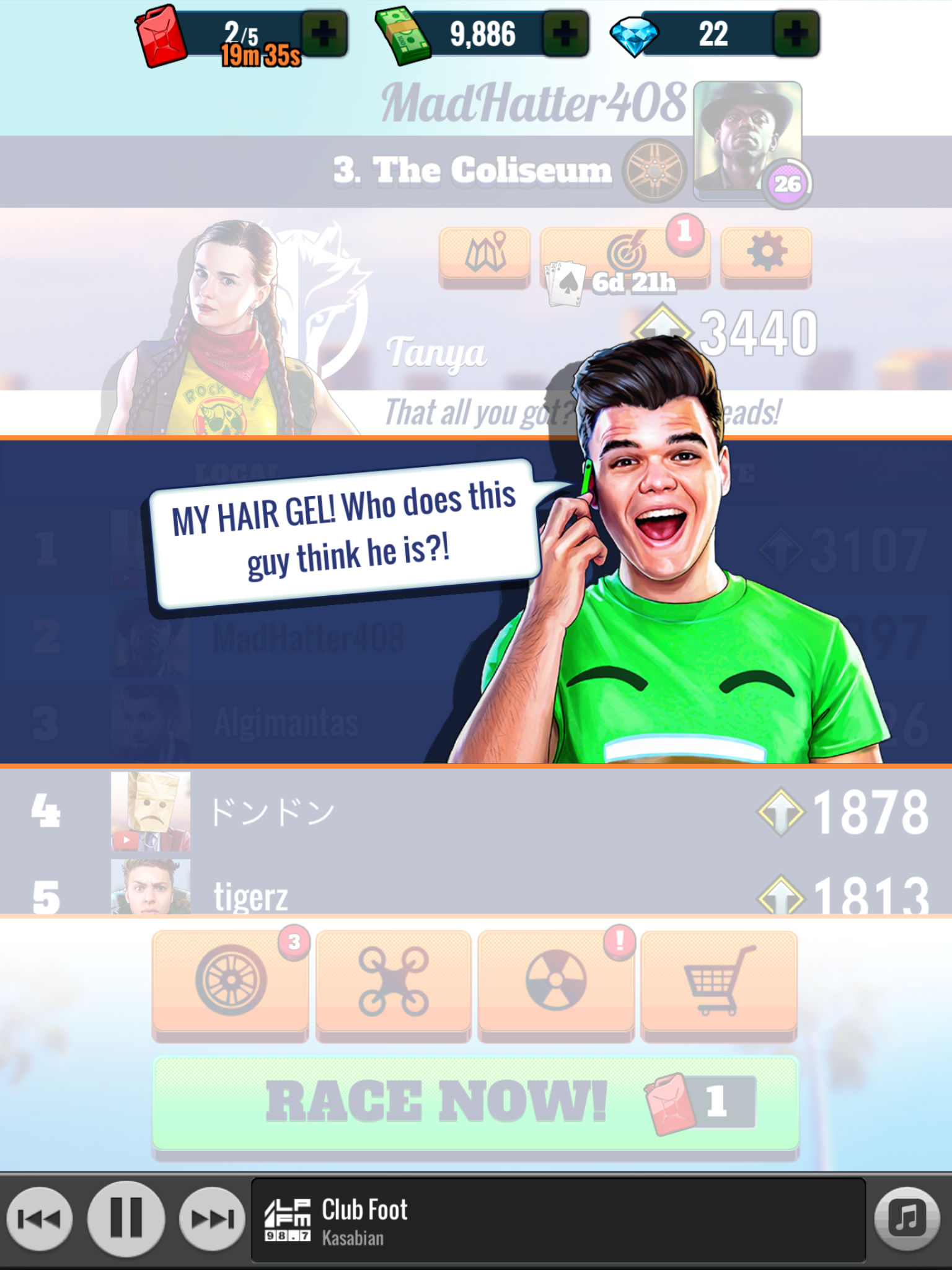 Maybe the repetition inherent in Fastlane could work against it as well, but you’ll likely find yourself more motivated by ways of beating your longest run and caught up in everything else it has to offer. This is one of those mobile games you didn’t realize you really wanted, and more of those are always welcome.