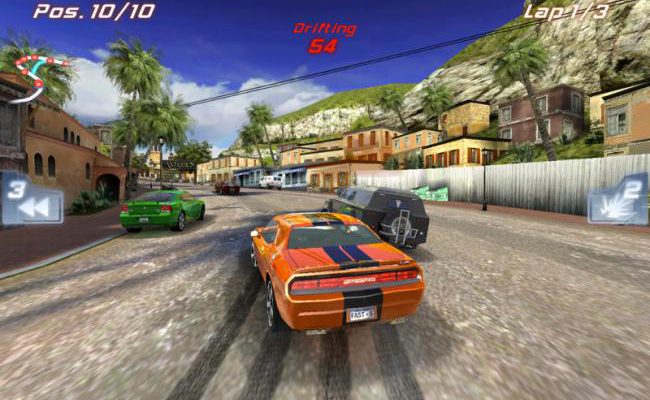 Burn rubber in this drag racer based on the blockbuster movie.

For all those who idolize Vin Diesel, your day has arrived. You may not be a loaded movie star, or have biceps the circumference of garbage cans—but you can live vicariously through your muscle-head hero and drag race with the best of ’em in Fast Five: the Movie Official Game, based on the racing flick of the same name.

In Fast Five, you’ll steer vehicles at breakneck speeds through the streets of Rio, and you’ll have lots of rides to choose from: a ’70 Dodge Charger, a Hummer, a police car, and many more. You can unlock these as you win cash in the one-player career mode. In this mode, you’ll follow the story from the movie as you participate in a series of races, competing against nine opponents. These adversaries may fall victim to bonus sabotages you can spend your winnings on: slowing the speeds of two enemy cars, for example, in the next race. All this road-rippin’ action is illustrated in pretty good-looking 3D graphics and to a bass-pumping hip hop soundtrack.

One of the game’s clearest strengths is the amount of replay value that’s offered. The one-player career mode alone gives you plenty to chew on. There’s the smorgasbord of rewards, like the aforementioned sabotages and souped-up automobiles, of course. But there’s also the variety of sub-modes within the career campaign mode. Between races, expect to compete in time trials, a special elimination race, a drift race (meaning, you’ll need to perfect the special technique of drifting) and a gear race (change gears at just the right time). 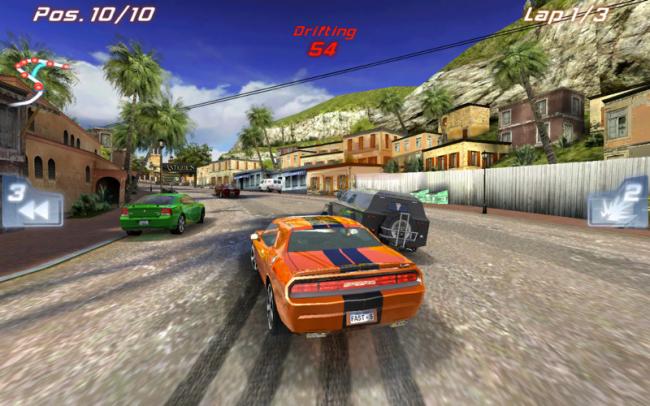 The races themselves are exciting, considering the cinematic element that’s included. During a race, the camera may suddenly cut to a dilapidated bridge that’s inching its way to collapse—and next thing you know, the huge structure’s lumbering onto the track, giving you a sudden and rather deadly obstacle to avoid.

The game’s biggest drawback is the occasional slippery controls. The drifting technique, which is required at some points, can be downright unruly to pull off. There’s also a rewind feature, allowing you to rewind time after an unexpected explosion or fallen bridge to steer clear of the inevitable wreckage. The concept is sort of nice, I suppose, but it also feels a little out of left field for me, and I never found myself having to actually use it in the first place.

The slight quirks aside, Fast Five will be a real treat for those with a taste for iOS racers. The rather extensive list of unlockables and titles to achieve, as well as the online multiplayer mode, guarantee that wannabe Vin Diesels will whet their appetite for flashy drag racing and high-speed gameplay.