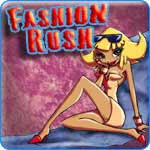 Call it a victory for style: From Fab Fashion to Jojo’s Fashion Show, chic couture takes second place only to haute cuisine when it comes to popular time management title themes as of late. Cue the debut of Fashion Rush, yet another notable entry into the canon, which – although encumbered by several strange design choices – nonetheless excels for (what else) its smart sense of aesthetics.

The first thing you’ll notice – a hand-drawn art style that’s slightly edgier than what casual gaming fans have come to expect. Be thankful: The outing’s always eye-catching backdrops and brilliantly animated characters – including tail-swishing kitties, bustling workers and elderly women who apparently dream of cars, money and half-naked beefcakes – are a perpetual highlight. Surprisingly, so too is the storyline (revealed between stages in a series of dialogue windows and comic book-style interludes), which revolves around heroine Satine, who grew up adoring the fashion industry, and her quest to create her own famed clothing collection and thriving boutique.

Play will be instantly familiar to anyone who’s enjoyed titles like Turbo Subs or Diner Dash. Each self-contained scenario takes place over the span of a day, is set atop a single static environment and involves filling as many customer orders as possible. Predictably, it’s a process that involves a lot of systematic clicking, as you take patrons’ requests, get fabric cut, restock material, order employees to make different types of clothes and then deliver finished duds to waiting shoppers.

Ups and downs are plentiful, especially since you’re under severe time constraints, with buyers slowly losing patience the longer it takes to fulfill their requests, creating the possibility that they’ll simply get fed up and leave. This, of course, proves problematic, since there’s a set goal in terms of tips that must be met to pass each level, with different types of customers possessing different patience levels and tipping ability.

It’s a familiar formula, albeit one with a variety of positive and negative quirks, especially as the further you progress, the more the action complicates, and bonuses like buyer-soothing radios, aggravation-calming cats and extra seamstresses become available. For instance, the ability to queue actions proves a welcome addition, and the need to replenish rolls of fabric as they deplete provides extra challenge. But at the same time, you can’t carry multiple objects at once (odd, since Satine does have two hands), there’s no option to cancel unwanted actions as in competing titles, combo bonuses are nonexistent and customers take forever to place initial orders.

Similarly, we dig the presence of time-/obstacle-based mini-games and the periodic need to quickly deliver accessories like sunglasses and fans on-demand, which can amusingly interrupt one’s thought process. The frequentness with which selected actions – say, picking up a cut swath of fabric for delivery – seem to accidentally misfire or be skipped due to the close proximity of on-screen hotspots, however? That we definitely could do without.

Still, high notes are plentiful, particularly as you can customize your pet’s name, choose which pieces of clothing deserve a spot in your collection, and wind up meeting a variety of quirky acquaintances from frumpy old ladies to male model types. Production values remain consistently high throughout the adventure as well, with the tale’s musical score and grab bag of sound effects more robust than you’d find in the average downloadable desktop diversion. What’s more, of course, the excitement quickly ramps up, meaning it won’t be long before you’re juggling dozens of tasks in frantic sequence.

Fantastic – not particularly. Memorable – survey says no. But a great way to pass a few afternoons if you’re the sort who can spend hours getting lost in the racks of your local high-end clothier or outlet mall? Bet your stiletto heels on it.