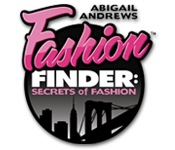 In Fashion Finder: Secrets of Fashion, you play as Abigail Andrews, roaming the streets of New York armed with just a Blackberry and an unerring sense of style. Snapping pictures of the hottest trends, your goal is to impress your boss, the editor of a major fashion magazine. It’s a great premise, but the game is so obnoxious and poorly done that you’ll probably give up on Abbie before she makes it to Fashion Week.

Most of Fashion Finder‘s hidden object scenes skip the usual many-itemed lists in favor of following a single theme. You might have to find ten different coats, various kinds of rain gear, or a dozen items covered in polka dots. It gels well with the game’s plot, but it takes away some of the challenge.

The variety suffers, as well. You’ll revisit locations several times, and even look for the same items from scene to scene. Finding ten furs once is fine, but doing it again in a different spot is terribly dull. Though it makes sense for trendspotter Abbie to spend her days looking for new belts, hats, and animal prints, it does start to feel rather repetitive after you’ve clicked on your fifth pair of pumps.

The game’s fashion focus can also cause problems for anyone who doesn’t know Prada from pandas. You’ll burn plenty of time wondering what girly board shorts look like or trying to figure out the difference between a blazer and a jacket. Fortunately, you can use the recharging hint as often as you like, and have the option to play without a timer, too.

The repetitive levels and fashion-specific goals could easily have been forgiving if the game was just better constructed. The hidden object scenes feel completely amateurish and forced, as though someone just slapped a bunch of poorly-Photoshopped images on top of each other in a half-hearted attempt to make something that looked like a New York City street.

I also ran into a particularly obnoxious sound anomaly; whenever you click on a hidden object, Abbie uses her Blackberry to take its picture. If you move the cursor at all while the picture is snapping, you hear a buzz as though you’ve clicked on an incorrect item. Annoying enough given how aggravating the sound itself is, but even more frustrating if you’re trying to play quickly to earn time bonuses. It’s a shame, because the written parts of the game, which chronicle the spunky young stylista’s climb to the top, are really quite cute.

Shoddy construction is not Fashion Finder‘s worst crime, however. The fact that you’re being asked to pay for it is. Fashion Finder is one big advertisement – for Marie Claire magazine, Caress soap, Versace, to name a few. There’s nothing wrong with a little product placement, and given that Abbie works in the world of fashion, an ad or two for well-known designers make sense. But once you design an entire level around finding 10 different kinds of Caress, you’re no longer adding atmosphere, you’re shilling.

Making games to push products is a great way to reach consumers – I’d much rather track down hidden bottles of Pepsi than watch a half-dozen commercials – but I’m not about to pay someone to let them try and sell me something. And considering how many other, vastly superior hidden object games are out there, neither should you.

Fashion Finder has a great premise and a very likeable main character in Abbie. Prowling the streets of New York for hot trends should have been a lot of fun, but the scenes all feel horribly fake, the actors look silly, and nothing is hidden particularly well. Add to that Fashion Finder‘s overwhelming "advergame" feel, and you have plenty of reason to skip this one for something more inventive and polished. Satisfy your inner fashionista with some Project Runway or The Fashion Show instead.