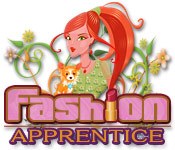 In Fashion Apprentice, Anna’s father wants her to be a lawyer like him. Like any normal kid, she rebels, and instead accidentally finds herself working as a fashion assistant thanks to her aunt. The aunt gives her hidden object tasks that help her learn the fashion ropes, and she discovers she has an eye for fashion.

Anna completes her tasks by finding hidden objects in scenes that reflect a groovy pop art style with pink, yellow and purple being the dominant colors. The style stands out from typical hidden object games, which tend to use more realistic images. Unfortunately, the style also hinders finding objects that don’t look anything like what they should. For example, pants look like shorts and a fern looks like a feather.

Hidden object games can be hit or miss on the objects to find and their tie in with the story. Here it’s a hit. The list of things to find include make-up, jewelry, clothing, accessories, and food. While models generally don’t eat – especially not cake and candy – Anna is a smart cookie and knows she needs her nutrition to stay healthy and energized to do her job.

Some scenes require interacting with the furniture to find more objects. Shelf doors need opening or players must watch TV to grab items from the models wearing them. The game earns creative points for the interaction with the TV.

Fashion Apprentice contains different modes for finding objects, but nothing that hasn’t been done before. This includes a flashlight mode where Anna uses a flashlight to find objects in a darkened room, comparing two scenes to find the differences, and finding a bunch of the same types of objects such as combs and flowers.

One scene requires cleaning up the flowers and putting them in vases. Another nice idea, but it builds a lot of frustration before getting the hang of it. The instructions fail to explain the vases have a shadow of the flowers that go with them. Even once a player figures it out, placing the right flowers in the right vase doesn’t come easy as it should.

Anna earns points from her work hunting down items so she can go shopping for clothes, accessories, hats, and shoes. Enter the wardrobe to dress up Anna with the stuff she buys and earn Glam Points up to five stars. But the wardrobe game loses luster because when you change Anna’s outfit, the score can drop way down when experimenting with different things, which discourages changing her clothes after receiving all five stars.

The Glam Points don’t noticeably affect the game and feel like they have no purpose. This nice idea of incorporating points based on wardrobe is a good one as is the use of arty-style scenes that need more work and better execution.

Anna’s room provides access to shopping, her wardrobe, and the map to return to hunting down more objects for auntie, photographers, and snotty designers. Her room has names of famous fashion designers. Click their names for their bios for a "fashionation" education.

A bonus mini-game comes on three times in the game, but has little purpose except to play good music. It works similarly to the Dance Dance Revolution games. A disco ball spins while objects come flying from the disco ball eventually glowing. When they glow, click them fast to earn a point. At one point, nothing comes out leaving the player wondering if something is wrong with the game. This dull and mindless game has no purpose as it doesn’t entertain.

The story is cliché and the characters — including Anna — just didn’t seem to grow on me. The dialogue sounds forced, and its inconsistent use of apostrophes can annoy grammar freaks. It has other features that will irritate players. Little things like a large umbrella in the backdrop that doesn’t qualify for "umbrella." Clicking on correct objects multiple times without success happens too often.

Scenes hide bonuses in the form of a dog bone, hourglass, and candy. These bonuses stop the clock or to speed the refilling of the hint clock. Yet, candy that looks like the bonus candy appears in many scenes and it isn’t the bonus. If a game has candy a bonus item, it needs to distinguish it from other candy. Also, attempting to quit the game for the day brings up a message saying that unsaved progress will be lost. Since a save option doesn’t appear anywhere, it’s hard to be sure that the game saves at the right place.

According to the map and dialogue, players travel to New York, Washington, DC, Hollywood, Miami, and Paris. But other than that, players wouldn’t know it. Nothing in the scenes hints Anna being near the subway and the hustle and bustle of New York City or standing near the beautiful shores in Miami.

With 28 levels and six locations, Fashion Apprentice lasts about half the time of a standard hidden object game. Really, the game brings something creative with its colorful style. Unfortunately, it will try the most patient person’s patience with its issues.