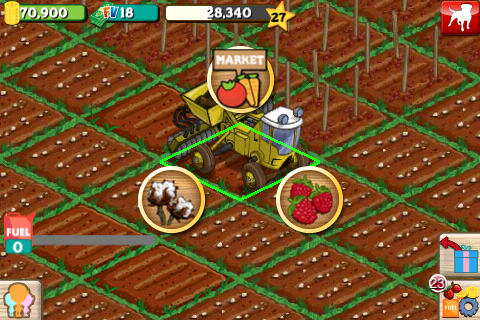 FarmVille for the iPhone Review

Syncing up with your Facebook account, FarmVille for the iPhone provides a seamless transition for Facebook farmers looking to take their farm on the go. If you’ve ever been called away only moments before harvesting some virtual corn, or accidentally left your grapes withering on the vine because you were waiting in line at the bank, this new free download from Zynga is the answer to your prayers.

In many ways, FarmVille for the iPhone offers the perfect blend of Facebook design and iPhone controls. The gameplay here is more or less identical to its Facebook counterpart, and yet it’s been brilliantly adapted for the iPhone. Collecting from crops, animals and trees takes nothing more than a simple tap. Zooming is handled through the iPhone’s pinch-and-stretch mechanic. Even using your farm vehicles is easier, as you’ll be able to draw a line across all of your crops rather than tapping them over and over again.

As smooth and as nice as the gameplay is, the real gem of FarmVille for the iPhone is something that happens when you’re not playing the game – push notifications. Like ngmoco’s We Rule before it, FarmVille will push a notification to your device whenever your crops are ready. You can turn this off in the settings if you’d like, but if you’re an avid enough farmer that you want to check your crops on the go, chances are you’ll be delighted to have these reminders at your side.

Other little tweaks really compliment the simplicity demanded by the iPhone. If you’ve planted more than one crop, for example, clicking on an empty plot will bring up a selection wheel featuring the other crops you have already planted, whereas on Facebook you’d just be taken back to the market. Your farmer avatar, who would normally need to slowly make their way around the farm to complete the tasks you’ve assigned them, is nowhere to be seen. Instead, things are queued up as soon as you tap on them and completed at a much greater speed. After plowing, planting, and harvesting through tapping, it’s unlikely you’ll ever want to tackle these tasks with a mouse again.

The game also offers up a superior gift receiving system. Facebook veterans know the tedious process by which gifts are received all too well; go to your Facebook requests page, accept a single gift, boot into the game to finish accepting it, and then return to your requests page to accept the next. It’s always been a lengthy, painful process – especially if you don’t check it for a few weeks and see your available gifts brimming into the hundreds. In the iPhone version, however, players will be able to accept all of their gifts in-game with a single tap on each available present. It’s quick and easy – exactly what gift receiving should have been all along. 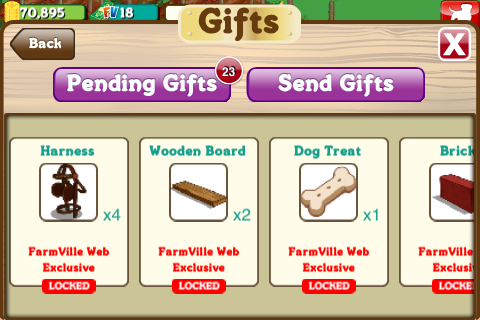 And while gift receiving is much improved, the gifts themselves quickly reveal one glaring fact about this new portable version: no matter how much it may seem identical to its Facebook and FarmVille.com counterpart, FarmVille on the iPhone is not the complete game. Many of the gifts you’ll receive will be tagged “FarmVille web exclusive,” meaning there’s simply no way to use these without checking the game out at your desktop. Most of these are related to ongoing events or group projects, like raising a horse stable, or collecting seasonal items to trade in for exclusive content. If you’re looking to actively participate in any of these events, you’ll need to put down your iPhone and fire up the original. The same goes for co-op farming, checking your achievements, viewing your comments box, and looking in on your collections.

There were a few other small annoyances that brought this offering down from where it should be. Animated set pieces, like the recent “Fun Slide” from the 7-11 Buy Earn Play promotion, now sit motionless. The arrows indicating which animals to collect from can sometimes be placed much too high, making it hard to distinguish who to tap in a crowded pig pen. And more often than not, friends appear as question marks rather than actual names and pictures. And while we love that you can purchase in-game FarmVille Bucks and coins using your iTunes account, the fact that you can’t redeem your FarmVille gift cards in-app is somewhat disappointing. Some of these problems, like the arrows and friends, will likely be remedied in a future update. Other concerns, like the lack of certain animations and the “web-only” gifts, come across as conscious decisions on the part of Zynga, and seem unlikely to change. 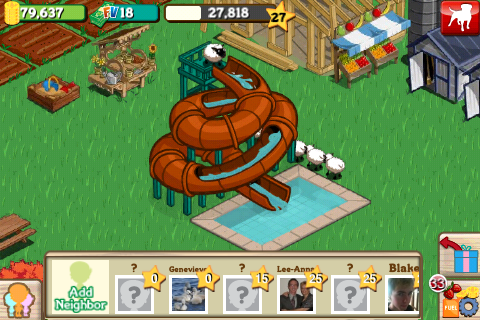 We were also surprised to see that mobile FarmVille is, at least at the present time, exclusive to the iPhone. With so many games working towards universal compatibility with the iPad, putting FarmVille on the bigger screen seems like a no brainer. Players could conceivably view their whole farm at once, while plots and animals would remain large enough to be playable without any need for zoom. The lack of an iPad version in no way detracts from the iPhone version, but that doesn’t make it any less apparent.

Thanks to the ease and comfort to be found in touch-based planting, harvesting, and collecting, we found the portable version of FarmVille to be an even more enjoyable offering than its Facebook counterpart. The problem, of course, is that this iPhone edition is lacking some of the bells and whistles that would let us call this the complete FarmVille experience. If you’re already a Facebook farmer that wants a mobile way to tend to your crops, FarmVille for the iPhone is even better than you’d hoped. If you’re expecting to do everything that you can do on Facebook though, you’re going to be somewhat disappointed.