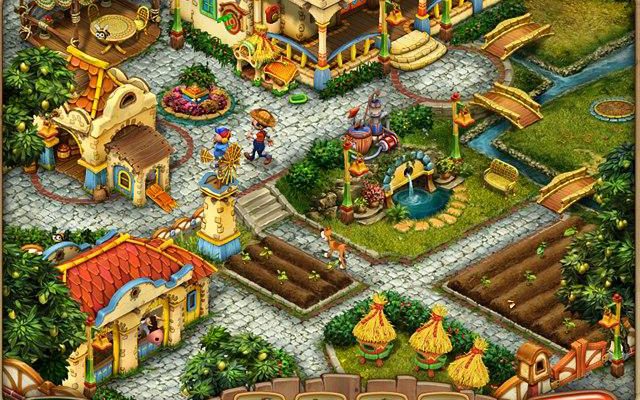 Farmscapes is a well-crafted treat for puzzle and hidden object gamers.

Farmscapes, the latest effort from Russian game maker Playrix (Gardenscapes, Royal Envoy), tells the story of a teenaged kid who is sent to his grandfather’s farm to make sure he doesn’t waste his summer vacation inside playing video games. The irony of it all is that once you pick up this devilishly habit-forming match-three puzzler, you’re likely to do just that: Spend plenty of prime tobogganing time in front of your computer.

Once at the farm—a beautiful 3-D environment filled with highly detailed object and character models, lots of interactive elements to click on just for fun, and soothing background music laden with lazy guitars, gentle brass, and delicate, meandering strings—the boy discovers that he has a previously unknown interest in and knack for running a farm. With our help, he cleans up the fields, renovates buildings, plants some crops, decorates the land, and eventually begins to diversify production by adding elements such as a hen house and bee hives. 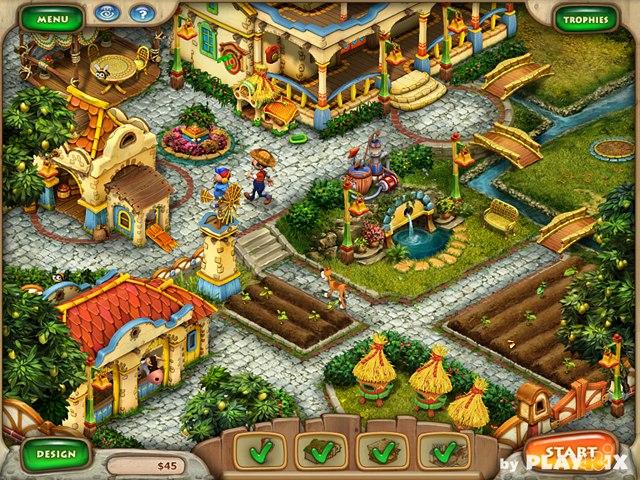 But outfitting the farm—a basic but gratifying design exercise—might best be considered a reward for working through the heart of the game: Classic match-three puzzling. Simple but engaging, these puzzles take place on tiled boards of various shapes and sizes that are filled with farm-themed objects, such as eggplants, jars of honey, and eggs. Players simply click on two adjacent objects to have them swap places as they try to create a vertical or horizontal string of three. The objects disappear once matched, often causing a cascade of additional matches as new objects fall from the top of the grid.

The main goal is usually to clear the screen of all gold tiles by matching objects above them, but sometimes we’re given a different objective, such as clearing a number of objects of a certain kind to match a customer’s order (it’s essentially a business; these puzzles are how we make money to finance the farm’s renovations).

Obstacles and bonus items are slowly introduced as the game progresses. Wooden tiles that obscure objects need to be broken by creating matches beside them while ice tiles can only be removed by making a match with objects inside them. Luckily, powerful bonus items such as firecrackers, bombs, and hives make things easier by, say, blowing up all nearby tiles or sending swarms of bees to remove specific objects.

There’s nothing particularly innovative or even challenging here—your primary concern isn’t finding matches but rather choosing which match you want to make to try to get to those hard-to-reach gold tiles lurking in tendrils that shoot away from the body of the grid—but it’s fun. Players looking for a little more difficulty can switch to timed mode, which introduces the possibility of failure (though its unlikely, thanks to those powerful bonus items) while offering a cash reward for swifter success.

The only real criticism I have is that I was thrown back to the farmyard after each match-three puzzle even though most of the time I just wanted to move on to the next one. I’d have preferred the option of simply staying in the match-three area rather than being forced to endure a pair of loading screens going back and forth. 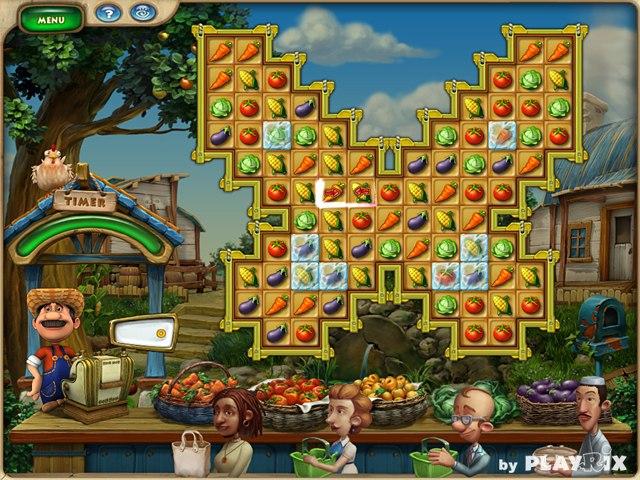 But at least there’s a good reason for checking in on the homestead. In addition to seeing whether you’ve earned enough cash to buy a new farm fixture, you’ll also progress the story and encounter plenty of little mini-games. Letters and newspaper articles let you know what the local townsfolk are up to—including a villainous developer interested in turning your farm into a mall parking lot—and often lead to fun little hidden object challenges that give you a chance to fulfill a narrative objective by, say, providing some honey to a hungry bear.

Players are usually tasked to go hunting for a broad spectrum of objects in the shed or the farmhouse or to scour the farmyard for a several identical objects, such as weeds growing in the fields or boxes of produce. Finding these objects is never particularly taxing—everything is of the proper size and shape and located where one would expect, such as a hammer on a counter or a compass on a table—but they’re still an entertaining change of pace from the main matching game.

Plus, the hidden object challenges are sometimes intertwined with other activities, such as clearing a blocked stream or hanging up a hammock. These tasks will require players to use their common sense as they scout the yard looking for items that aren’t listed but which will help with a particular goal, such as a key to open a door or a pin to pop a balloon. I only wish there were more activities of this kind, as they tend to be the most challenging part of the game.

Indeed, lack of difficulty might well be the only real reason for fans of matching and hidden object games not to give this one a go. Still, it’s difficult to imagine anyone looking unfavorably upon Farmscapes. Casual games this beautiful, well-crafted, and just plain relaxing don’t come along every day.