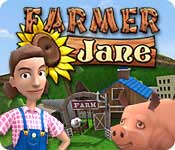 As popular a theme as agriculture has become with casual game developers lately, you’d think it was the newest pop culture sensation, not a hardscrabble means of eking out a living that’s rapidly losing steam in North America. Still, just in case you missed the numerous other rurally-influenced simulations released in the past three months alone, now there’s Farmer Jane which, unlike competitors, packs slick 3D visuals.

Unsurprisingly for a title that otherwise offers no major innovations, relying instead on a suave presentation and polished play mechanics to carry the day, it quickly proves an endearing choice, if slightly less conducive to long-term play.

Per the tale, told through comic panel-type cutscenes, Grandpa’s been having a dickens of a time trying to keep his farm afloat, what with consumers’ increasing indifference towards organically-grown chow. Thankfully, Jane and Joe are here to the rescue (and each playable), with one offering to save the day by salvaging the operation while the other handles publicity, attracting more customers to the business.
Naturally, this is where you come in, controlling any given member of the pair who, for an entire month at a time, must keep the place (displayed as a series of stunning three-dimensional landscapes) from falling apart. Performing this duty is easier said than done though, as days rapidly tick away while you tool around with your wheelbarrow planting crops, raising livestock and keeping shoppers happy.

Basically, every new 30-day session takes place on a colorful backdrop, all laid out with a variety of buildings and objects from fields to silos, tool sheds and flower beds. Your goal: Earn enough cash to meet a set monthly minimum by fulfilling the needs of the multiple patrons who show up (often simultaneously) requesting random vegetables or animals.

However, to do so, you’ll first have to perform the tasks needed to grow or feed them until ready for sale, respectively. The catch being that all have to be undertaken in specific sequence, and each takes time, creating a constant juggling act in which you must carefully balance your schedule by continuously clicking on jobs in the most efficient order. And, of course, that different types of shoppers sport differing levels of patience that dwindle with every passing second, as accordingly, do the tips they’ll leave once orders are eventually fulfilled.

Needless to say, things can get quite frantic, moreso even than in similar offerings, thanks to the title’s brilliantly hyperkinetic pace. In addition, passing seasons, which are represented by catchy changes of aesthetic and atmosphere (including falling leaves and billowing flurries), bring their own challenges in the need to rake leaves or shovel snow.

Be aware, however: The game’s beauty truly does lie in the eye of the beholder. Much to the chagrin of beginners and delight of genre veterans, you’ll find that the difficulty level and complexity often ramp up quite suddenly and unexpectedly here.

Therefore while some may squeal with delight over having to plant seeds, hoe the yard, serve meal, round up acorns, feed the pigs, sweep out sties, grab eggs, pull pumpkins, etc. in one fell swoop, others may shriek with aggravation. Never mind that from time to time you’ll also have to deal with pesky inspectors who can levy fines, or critics that’ll leave important bonuses if catered to in a brisk manner.

Mercifully, all the cash you earn is good between levels for equipment upgrades, which – once purchased – improve production speed, the amount of goods you can carry and resources’ overall bounty. Still, each new change of venue brings another proverbial hill to climb, and minor niggles like the inability to cancel actions; support for queuing only a handful of commands; and the option to only toss out, not rearrange the order of, various items in your wheelbarrow.

That said, great audiovisuals and fun extras (see: the option to deck your character out in collectible clothes) aside, what we’re really most impressed by is the offering’s general polish and production values. But, as indicated above, play could use some tweaking – constant introduction of new commodities and in-game twists notwithstanding, it’s generally a chaotic, and highly repetitious, jumble.

Nonetheless, if Dairy Dash, Ranch Rush and Farm Frenzy don’t offer enough bucolic action, what can we say? For those who just can’t give their green thumbs enough of a workout, Farmer Jane is as good a way as any to (wait for it) keep milking the virtual barnyard category for all it’s worth.