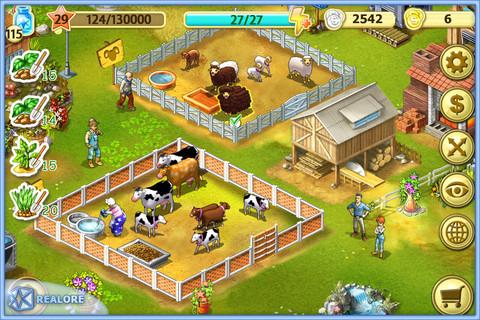 Farm Up has room to grow, but there’s a good crop of fun already waiting

Farm Up is set in the 1930s, which may be the oddest time setting for a farming game imaginable. This was the age of the miserable Joads of the Grapes of Wrath, a host of failed government aid efforts, and Dorothea Lange’s portraits of weather-beaten Okies fleeing the Dust Bowl. All in all, it was a time of hardship and tears that forever changed the face of rural America.

Farm Up is quite a bit more upbeat than that, although snippets of that legacy make their way into the cheery can-do narrative. It’s also probably the best farming app on both the iPhone and the iPad, complete with a choice crop of features sullied by only a few patches of weeds.

And yet, for all that, it’s not too different than what we’ve been playing in Farmville and similar games for years. You’ll buy crops, plant them, harvest them and sell them. Elsewhere, you’ll tend to the upkeep of the farm, take care of animals, and maintain buildings.

Farm Up‘s charms lie instead with its presentation, which centers on a dusty farm acquired from another struggling farmer. It’s all quite beautiful, ranging from the detail on the dilapidated farmhouse at the beginning to shop backgrounds that glow with a folksy ambiance that’d be at home in any Cracker Barrel. There’s even a mildly engaging story to follow, which kicks off a little slowly as the new owners try to learn their way around the farm with the previous owner’s help.

Just don’t expect wildly different mechanics. Progress here still relies on energy, and the very act of gaining experience and currency still involves picking up the little shower of stars and coins after a successful action (to the point that they clash with Farm Up‘s slightly more realistic style). True to social gaming conventions, there’s also an option to speed up long activities such as growing pumpkins with real-world cash, although that means there are also some quests that you can’t complete without spending premium currency. The good news it that you won’t have to put up with any bugs or similar issues aside from an annoying announcement that “This game is not recognized by Game Center” every time you open the app. 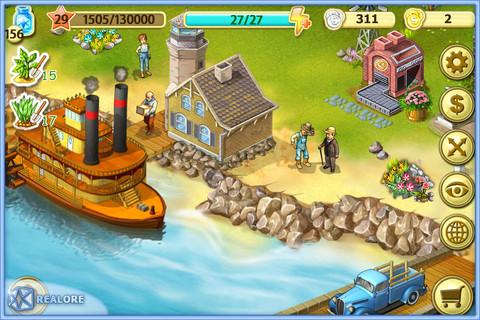 But if you just can’t get enough of farming games, there’s more than enough to keep mobile farmers busy in this free to play offering, including a wealth of quests and little historical touches such as helping other states and countries recover from the Great Depression with your harvest provides a tidy sense of purpose.

It’s a welcome facelift to the farming experience that millions have come to love in recent years, with the main difference being that Farm Up lacks the social interactions, gifting, and bragging rights that makes games like FarmVille such a hit. That may not be a problem for some players (including myself), but if your main enjoyment from these games springs from their social features, you’d be better off sticking to Facebook. If you’re content tilling your own fields, however, Farm Up is more than worth a download.