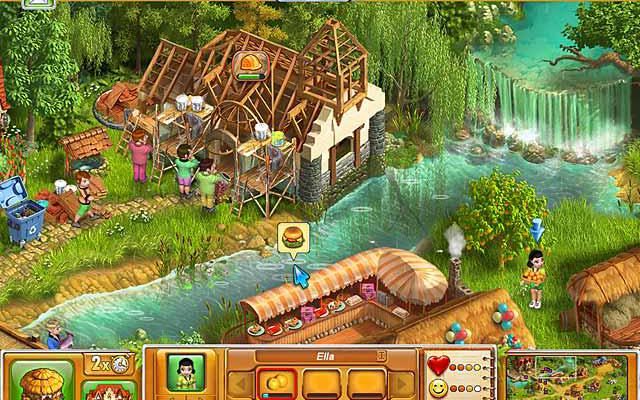 We’ve all heard the urban legend of how the ooey-gooey “life sim” came to be: two developers ran into each other, one carrying a strategy game and the other carrying a simulation.  The games collided:  “Hey, bro, you got strategy in my sims game!”  “No, dude, you got sims in my strategy title!”  And so, a new combination was born.  I hope you enjoyed that story, because you won’t find a better one in Farm Tribe 2.

Maybe that’s unfair.  I’m a little grouchy today, since I stayed up all night playing Farm Tribe 2.  Much of that time was spent trying to figure out why I kept playing it.  It’s a beautiful game, to be sure.  The hand-drawn grounds of the estate that you’re working to fix up are crisp and detailed, the controls are responsive and precise, and despite a severe linearity, the game does keep you busy and engaged from the very beginning. 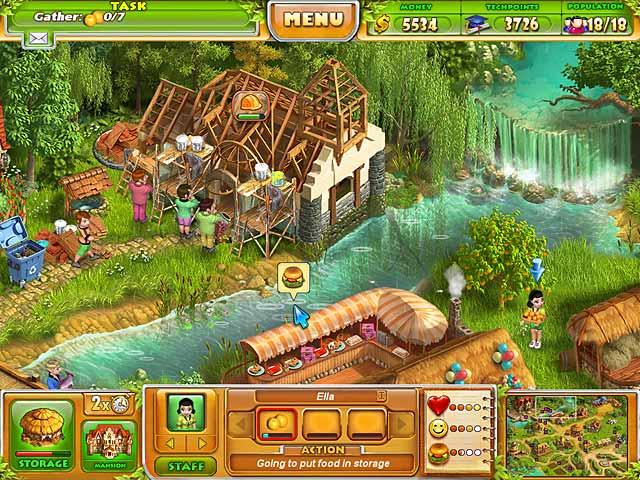 That engagement and the gameplay itself is a shining gem.  Whereas many games of this genre feel more like watching grass grow than actually playing, Farm Tribe 2 does an excellent job of keeping you busy without making you focus strictly on worker management.  Your workers themselves are extremely autonomous, and will take care of needs like hunger or sadness when their mood gets too rotten (although it’s beneficial to tend to them before this, as their productivity suffers), returning to their task immediately after. The interface for managing workers’ tasks is detailed and efficient, the 2x speed button allows for faster gathering, and the skill increases from assigning a worker the same task greatly improves their results and effectiveness.   Surprise events and requests throughout the game will give you somewhat hidden object-like breaks, where you’ll scour the game field for birds, rocks, and trinkets, or whack produce-stealing moles into submission.

What’s really lacking is any sort of motivation besides the gameplay itself.  Farm Tribe 2 is addictive because gamers like to achieve goals and see hard work rewarded.  Once the game is turned off and you no longer have the immediate feedback of seeing your items, profits, and workers’ skills increase, there’s no real incentive to return to the game.  The “plot” begins after the first Farm Tribe, which saw Annie Chester and her father, Mark, return to Europe after discovering the treasure of the Indians.  Annie is now engaged to Paul, and Mark gives them a decrepit mansion and plot of land as their wedding gift.

Generously, before he vanishes forever, papa Mark does hire three workers to assist you in restoring the estate.  These workers, and all future others you “buy” for a one-time fee, basically become your indentured servants for the rest of the game.  Besides their gender, name, and clothing, each worker is interchangeable and homogenized, differentiating themselves only slightly after you begin training them in specific skills. 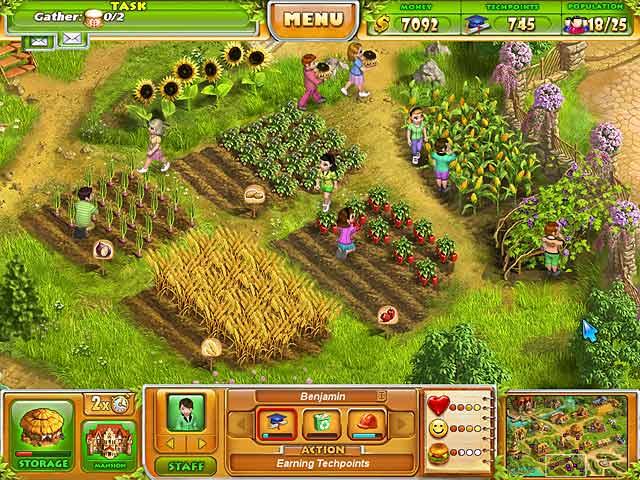 After briefly considering just getting married on the coast somewhere, Annie and Paul decide to dive headfirst into making the estate the best darn farm slash marketplace slash sweatshop possible.  There’s also mention of some hidden jewels, a mysterious Count Cagliostro, and a crazy ex-owner of the mansion—who shows up periodically to set fire to your buildings, which you keep forcing the workers to rebuild.  None of these things are really important, though, as the primary focus for our “heroes” seems to be fixing up their mansion and preparing for their wedding.

As you progress through the ‘story,’ you will occasionally uncover clues to the mysterious treasure alluded to, but mostly you will be doing more ridiculous things like planting a sunflower field and building an entire distillery in order to make sunflower oil for your wedding chef.  The produce grown and picked by your horde of workers is used to create various dishes, like orange juice or French fries, which are sold in your roadside marketplace.  The money earned there is used to further expand your plantation and its marketplace operation, allowing you to buy things like a $200 bench for tired visitors to sit on, a $1000 floor lamp for your posh mansion, or eventually a cowshed so you can—why else?—have fresh dairy products at your wedding. 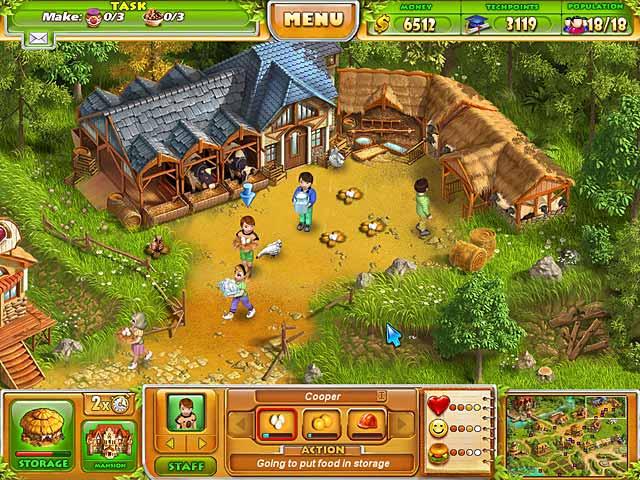 Because of the linear nature of Farm Tribe 2, each of these tasks must be completed before you can move on to anything potentially nobler.  The game will present a new building, recipe, or item that must be created or purchased, and you are given no choice in the matter, whether it’s fixing a bridge, building a flour mill, or buying furniture for the mansion.  Being forced into these disappointing goals — I personally don’t care about wallpapering your party mansion while my seventeen slaves workers are crammed in a small hut together — wouldn’t be such a deal-breaker if other games of this genre hadn’t already shown us how it should be done.  The lofty purpose, optional tasks, and actual characters of games like Artist Colony and The Island: Castawayprove that life sims, rich stories, and player choices mix wonderfully.

Ultimately, my grouchiness was caused not just by sleep deprivation, but by the wasted potential of a game that could have been fantastic.  With such solid gameplay, graphics, and attention to detail, how developer CrioGames didn’t include likeable characters, meaningful plot, or even sensible goals — why doesn’t that chef have any of his own food?! — is truly astounding.  As long as it was in front of me, I couldn’t stop playing.  But once the game was turned off and the results no longer tangible, I found little incentive to return to Farm Tribe 2, save to possibly free its workers from their indentured fate.