By Lisa Haasbroek | 12 years ago 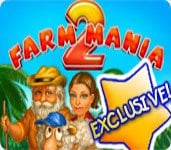 Realore’s Farm Mania 2 is the latest title to capitalize on the popularity of farming in casual games, from Farm Frenzy and Ranch Rush to Zynga’s outrageously popular FarmVille on Facebook. Much like in the first Farm Mania, you get to manage a virtual farm and raise crops and animals.

The story is very similar to the original, and so many other farming games. While driving through the country to visit her Grandpa, Anna makes an impulsive decision to buy another run down farm. With her Grandpa’s help, she hopes to make the farm a smashing success, even if the odds are stacked against her. Along the way, Anna finds love in a dairy farmer named Bob, but we’re never told much other than that she met him in town and they moved in together.

If you’ve played Farm Mania, you already know everything you need to know about the game play. The two games are extremely similar, even recycling graphics and upgrades. Each level has goals to be met, like producing certain crops or goodies, or meeting an income goal, and you must meet these to advance. Strictly speaking, you can’t lose, provided that you complete all the required goals.

Crops include carrots, cucumbers, and strawberries to name a few. There are also fruit trees to grow, and fish to catch. While Anna does most of the farm work, her family also helps out. Just click on the task you need to do, and the right person will automatically do it.

Unlike many other games, you keep your farm animals from level to level, unless you choose to sell them. If you buy a she-goose and feed it with grain and water, it will grow up to be a big she-goose that produces eggs. You need to grow the grain yourself, so it involves multiple steps, but the payoff is nice. The same applies to other animals, who all need food and water to grow and produce goods.

Similar to the Farm Frenzy series, there are many pretadors to defend against. For each predator, you can raise another animal or buy an upgrade that will chase them away, or else you need to click them with the mouse to scare them off.

In addition to farming crops and raising animals, you can make processed goods. Grain can be sent to the mill to make flour. Bob can also be sent out to chop wood and gather coal. You can take these raw materials to the bakery, and Granny Martha will use them to make bread. Later in the game, you can also make cheese in much the same manor.

If pushed, I’d say that Farm Mania 2 is more of a multitasking game than a time management game. There are a large number of tasks to manage at the same time. While you are timed, the timer only determines your score and cash earnings. However, you do need to complete tasks within a certain time period, or else your crop dies and you’ll have to plant it over again.

In a new twist, there are occassional hidden object rounds to beat. Your neighbor’s animals sometimes escape, and these are color blended into the background. If you spot one, click on it to send it home. This is pretty tough, but you don’t need to find them all to continue. Too many random clicks and a coyote gets them instead – yikes!

To the game’s credit, it blends raising crops and raising animals quite nicely. Despite the variety in tasks and animals to care for, the game is surprisingly easy to learn. You are introduced to new tasks gradually, and much of the game play is intuitive. I wouldn’t call it hectic, because the speed is around standard for a time management game, especially when compared to the Farm Frenzy games. However, there is a great deal of multitasking, which makes the game challenging and adds to the replay value. The length is good (around 10 hours in my estimation), and the production values are right on par with other games in the genre.

The hidden object mini-game could have been further developed to include a hint system and more varity. However, my biggest complaint is that the gameplay is extremely similar to the first Farm Mania. The story, the graphics, the animals, the crops, the rabbits, the bakery … all of these elements are precisely the same as they were in the first Farm Mania. It’s questionable whether fans of the first game will find enough new material to keep them entertained.

Judged in isolation, Farm Mania 2 is a fun and complex time management game that will certain test your multitasking skills. It offers little new material  when compared to the first Farm Mania, but the pacing is good, and it’s a nice challenge to earn an expert score on each level.