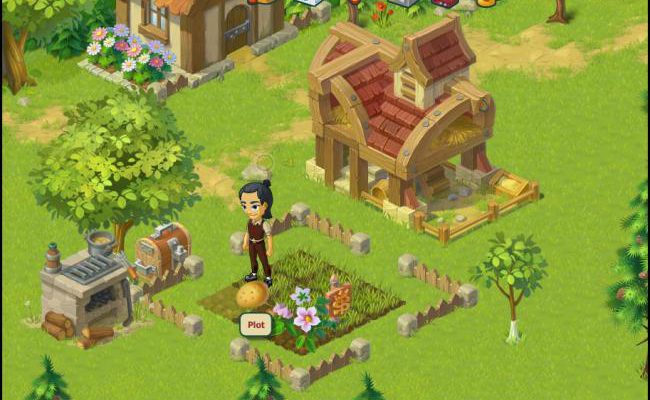 Farm, fish, mine, and cook in your browser with Farm Kingdom

Any game with the word “farm” in the title is one that certainly has an uphill battle to fight, but Farm Kingdom does a fairly decent job of setting itself apart. Your typical farming simulation game, it contains many of the nuances of the genre but builds on them with more involved mechanics, crafting, and a generally more expansive virtual space from which to work within.

Farm Kingdom has the same basic objective as any other simulation-oriented title, which is to build up a successful virtual space. The big difference here, however, is that the game is also constantly connected to the game server, allowing friends and other players to chat amongst themselves. That noted, the basics of the game are still pretty familiar with you growing and harvesting crops and other farm goodies (like fruits from trees or eggs from chickens).

One thing that you may notice about the game though is that the spaces where production items grow are often already laid out. Things like trees can be placed just about wherever, but crops are all grown in a small garden of six plots with each one having to be bought. The same goes for animals too. Early in the game, you will end up having to buy a chicken coop, but chickens can only be placed on roosts, inside the coop (yes, you can enter buildings), that must be purchased. 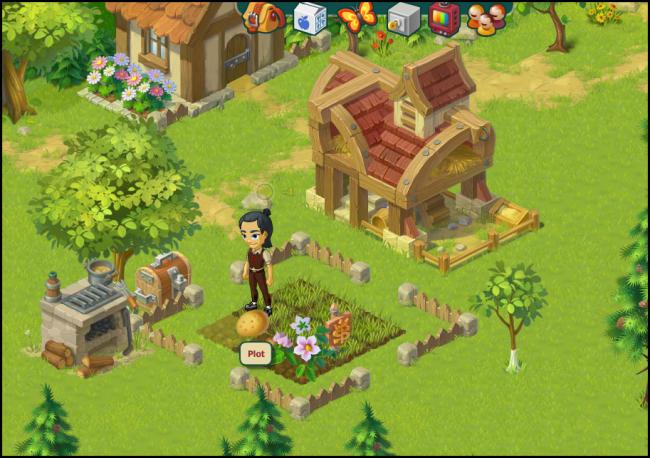 Like virtually all simulation games, any harvestable item takes a period of time to grow. In Farm Kingdom, however, extra items are also dropped. These are of particular importance as they can not only be sold from time to time, but play into the myriad of materials used to create other concoctions.

The most prominent of these are buildings (as well as building upgrades) and additions to buildings. To construct any structure, you must first purchase it, then click several times, at the cost of slowly recharging energy, to build it. Once that’s finished, it must finalized with various materials such as wood, copper, gold, and so on. The first is basic enough and is earned by chopping down trees. The others come in the form of the game’s many mini-games.

Farm Kingdom actually has three professions that you are capable of leveling: mining, fishing, and cooking. Mining is the most interesting though and tasks you with removing blocks of the same color by drawing a line to connect them (kind of like a match-3 game). Periodically, pieces of ore will appear within the game grid, and removing blocks so it reaches the bottom will allow you to collect it. Fishing is a bit more dull and consists of merely casting a line out and keeping the mouse pointer atop a hooked fish (if anything ever bites in the first place). As for cooking, this is a bit mundane as well, as players must literally prepare every step in a recipe by tracing a dotted line with the mouse. Moreover, before cooking can even take place, the ingredients from crops or farm animals are required.

These all play into enhancing your farm though, and will grant extra perks. Obviously mining garners building materials, but cooking and fishing can provide energy boosts or extra income. Additionally, the more these are performed, the more they level, and higher levels equate to greater bonuses and more features. For example, leveling fishing allows you to build new fishing structures that grant perks like net making. 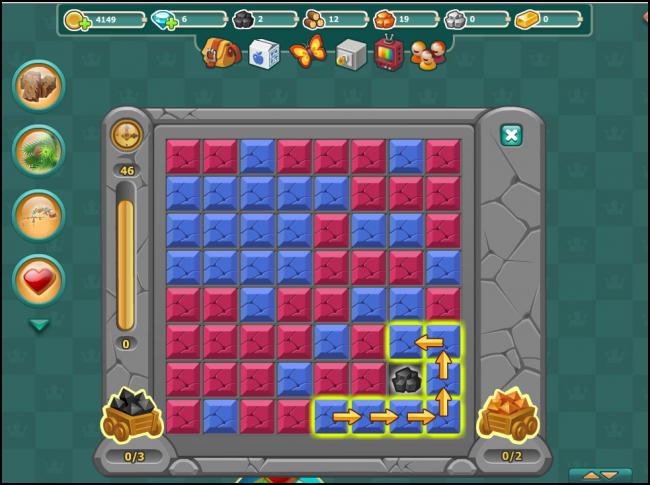 On the social front, things like gifting are also present, but one of the more interesting aspects is the ability to throw a virtual “party.” Should you have the barbeque item, you can throw a party by posting it to Facebook or Twitter. Any friends that “attend” will receive special gifts and should enough come, the party host will receive significant rewards as well.

Overall, Farm Kingdom is decently expansive. Unfortunately, that tends to play into the major problem with the game: it’s constantly loading, and often the load times are rather long. Blame it on the Internet or the PC being used if you must, but it should not take near five minutes to load a game for the first time. Thankfully, after each area has been loaded at least once, this problem tends to go away.

If you have the patience to get through that first load time, there’s some fun to be had with Farm Kingdom. It expands quite a bit on an overplayed genre, creating a nice alternative to other virtual farming games.