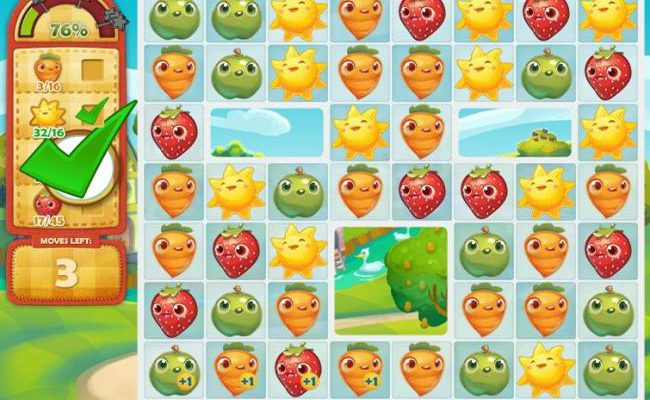 Save the farm! Pa’s counting on you!

Feeling a bit logy after crunching up all those sweets in Candy Crush Saga? Maybe it’s time for you to get a little bit of fresh air and healthy food down on the farm. Farm Heroes Saga is a new match-3 game from King that plays like its hugely popular predecessor. In other words, it’s cute, and it’s highly addictive. Here’s something new, though: Farm Heroes Saga might be the only game where ducklings and flowers are capable of sending you into a murderous rage.

You play through Farm Heroes Saga as a farmer who’s in some incredibly cute company, including a goggles-wearing pig and a dog outfitted with galoshes. A vile raccoon named Rancid is looking to pave over the farm, and it’s up to you and your animal friends to stop him with some match-3 magic. 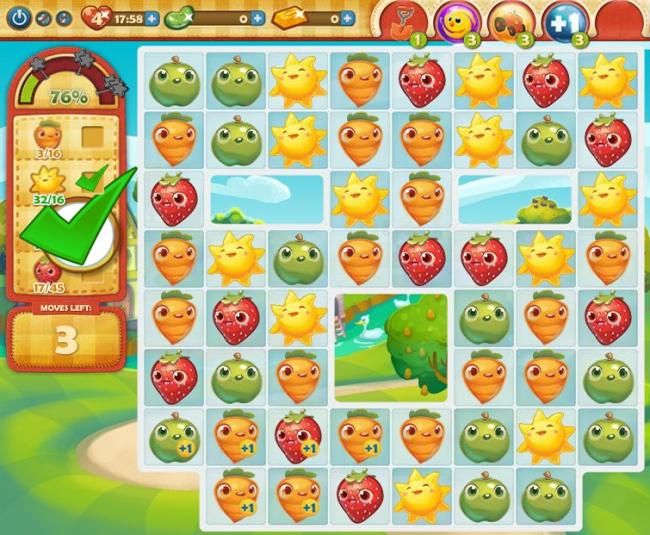 Like many of King’s games, simply achieving a high score is not the goal of Farm Heroes Saga; saving the farm requires you to perform different tasks from level to level. The game pieces on each board have (adorable) identities that you need to take note of: There are strawberries, onions, smiling suns, raindrops, and others. Typically, passing a level requires you to “harvest” a certain number of select crops within a certain number of moves.

It sounds easy, and there’s really no trick to the first few levels of Farm Heroes Saga. Things start to get a bit sticky as the levels go on, however. There are, for example, frozen crops that can only be thawed if they’re part of a three-match. There are also ducklings that can only be hatched if you match up three eggs, and flowers that will only bloom if you perform a three-match beside them. When you’re required to harvest these wonderful citizens within a very limited number of moves, you often find yourself barking, “Now how the heck am I supposed to do that?” 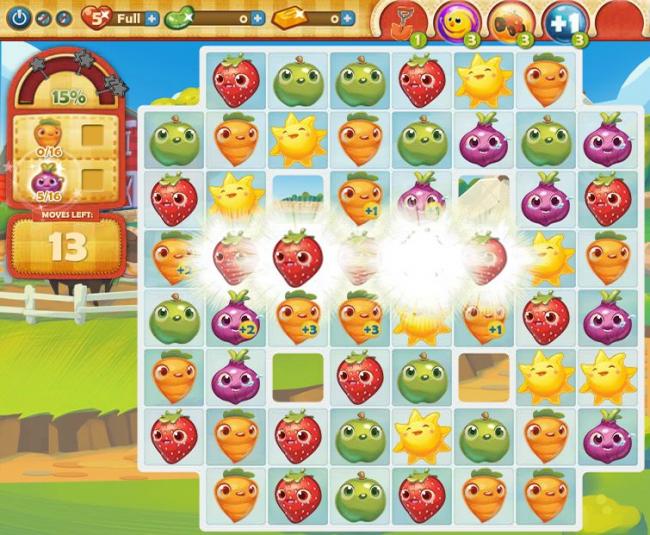 The answer is “persistence” and “power-ups.” You’re allotted a certain number of free power-ups in a day, and they can mean the difference between defeat and victory. When you run out, you can buy more with cash (of course), or you can try the level again and hope that the crops are stacked in a way that will actually allow you to win. It’s not uncommon to plug away at a level for ages, then suddenly fly through it—though you may need to be patient, since you’re granted five lives that recharge one at a time every thirty minutes.

Farm Heroes Saga can become tremendously frustrating at times, but it’s undeniably addictive, too. The changing level goals keep the action fresh, as do the “boss battles” against Rancid Raccoon. To win against Rancid, you need to match up vegetables and fling them at him. Hey, it worked against Wart in Super Mario Bros 2.

If you’re still shackled to Candy Crush Saga, you’ll definitely want to give Farm Heroes Saga a try. It’s the cutest game you’ll ever rage at.