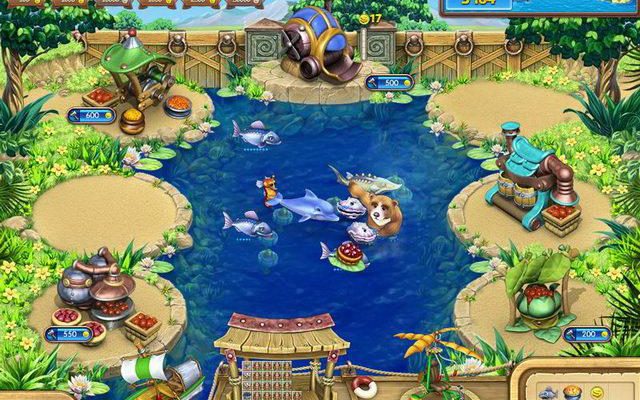 When Farm Frenzy 3: Madagascar came out in July, I couldn’t help but feel that the developers had run out of ideas. After all, here was the fourth FF3 spin-off to come out in just one year, and it did nothing new or interesting. So imagine my excitement when I started Farm Frenzy: Gone Fishing: a new, aquatic themed game that wasn’t saddled with the three moniker. Finally, something new! But alas, Gone Fishing is yet again more of the same, just with a new look.

The set-up for the game is almost frustratingly familiar. You once again play as Scarlett, the world’s foremost expert on farming in bizarre locales. At the outset she’s given an award for her contributions to the world of agriculture, and it comes with a special prize: her very own island. Of course, being Scarlett, she naturally takes this opportunity to set-up an island farm. 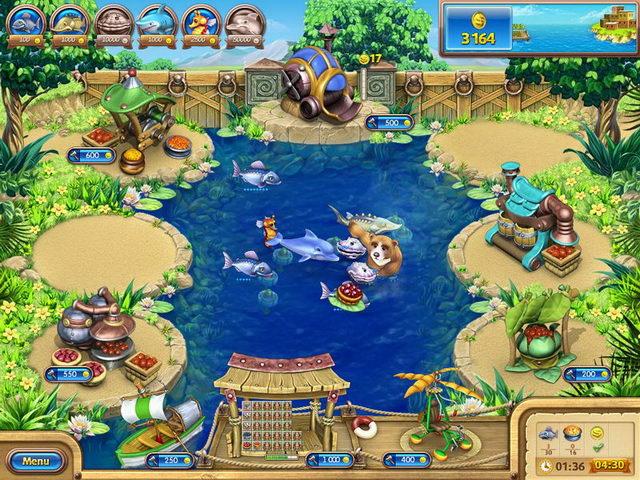 Previous games in the series centered around raising chickens, collecting their eggs, and then using those eggs to produce items like cookies and cakes. And though Gone Fishing now stars a cast of underwater creatures, you’re still essentially doing the exact same thing. Only this time, instead of chickens, you’ll be raising salmon and then collecting their caviar. This caviar can then be refined and after several steps turned into pricey caviar butter. It’s not just the salmon though. Every animal in the game is new, but they all perform the same functions as past animals. Sturgeon produce slightly more expensive caviar. Seahorses collect items for you. Sharks chase away bears. And dolphins are the new super animal, with an exorbitant price tag and the ability to find buried treasure.

In short, it’s Farm Frenzy but with fish. While that means there’s nothing you haven’t seen before, it also means the game is solidly crafted. There’s a total of 90 levels to play through, and earning a gold trophy is pretty difficult, so there’s plenty of incentive to replay stages once you’re done with them. As is custom, there’s also an endless mode that unlocks once you complete the story mode. If there is one thing that is different gameplay-wise with Gone Fishing, it’s that things do feel a touch more difficult this time around. This is because the bears — yes, there are bears once again — feel much more prevalent in a number of the stages, really forcing you to work out your clicking finger.

Unlike the most recent game in the series, Madagascar, Gone Fishing at least looks different than the rest of the FF3 stable. In that way it’s a lot like Ice Age: little new in terms of gameplay, but at least it has a unique look. And the aquatic theme really makes this the best looking game in the series to date. The water effects are lovely, all of the different sea creatures look great, and there’s plenty of the series’ trademark goofy animations. 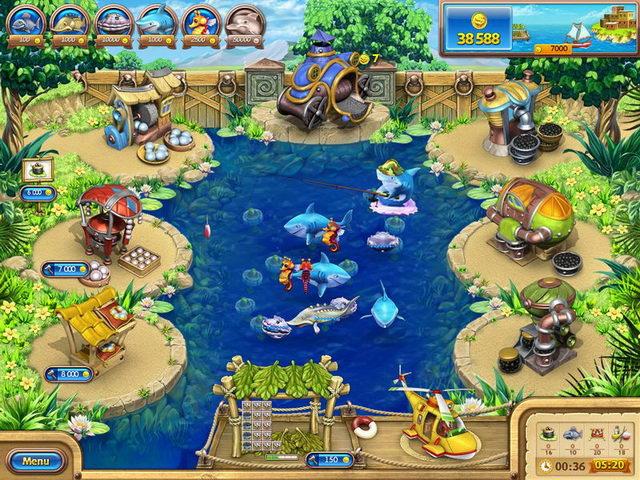 But great graphics don’t make a great game, especially when it’s a game we’ve already seen numerous times before. It may not have a three in the title, but make no mistake, this is yet another Farm Frenzy 3 spin-off. So unless you’re desperate for a fix of the same gameplay seen in past titles or you’re looking for something that’s slightly more challenging, chances are you’ll want to skip Gone Fishing. It looks great and is solidly crafted, but after so many spin-offs enough is really enough. Hopefully when the series makes it’s inevitable return, Alawar will have caught a few new ideas.